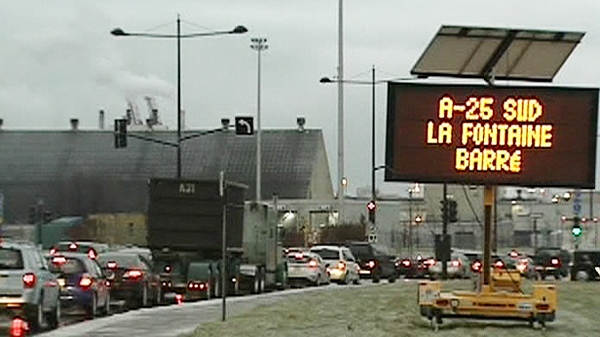 Crews removed dozens of paralumes from the southbound lanes of the Lafontaine Tunnel in 2011. This weekend they will be removed from the northbound side.

Northbound lanes through the Louis-Hippolyte-La Fontaine Tunnel will be closed this weekend while crews remove the remaining paralumes that hang overhead.

Drivers coming into the city will have to take one of the bridges instead, with the final option being taking Exit 91 off Highway 20 and travelling along Autoroute 132 to the Jacques Cartier Bridge.

Paralumes first entered the public consciousness last year, when the Viger Tunnel along the Ville Marie Expressway collapsed as construction crews were repairing the walls.

That incident prompted Transport Quebec to evaluate the safety of the multi-tonne sunscreens hanging over several highways at tunnel entrances and exits, and making the decision to remove them.

The concrete paralumes in the Viger Tunnel were removed four months after the July 31, 2011 collapse.

Transport Quebec made a surprise decision to close the southbound lanes of the Lafontaine Tunnel on Dec. 21, 2011, stating a just-completed report said the paralumes covering those lanes were not safe.

At the time the remaining sunscreens on the southbound exit and northbound lanes were said to be in good condition.

Now Transport Quebec has determined the supporting pillars on the northbound side are weak, and rather than repair them, it has decided to remove the paralumes instead.