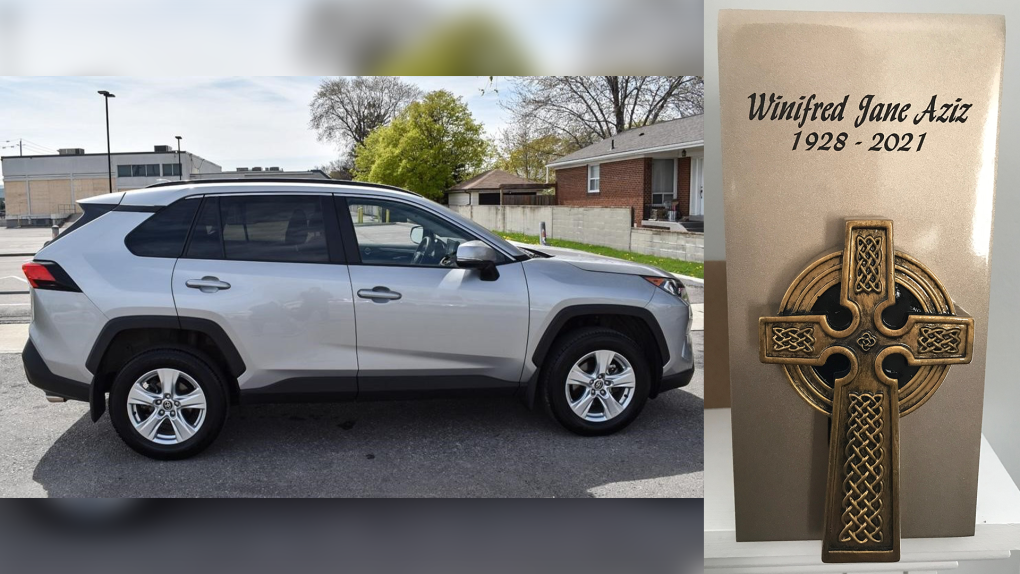 A woman is calling on Montrealers to keep their eyes peeled for her stolen vehicle. She says she does not care about the car; it’s her mother’s ashes, which were sitting in the back seat, that she wants back.

Catherine Lewis, a Montreal-born Torontonian, says she and her sister drove to Montreal to bury her mother’s ashes next to their father at the Notre-Dame-des-Neiges cemetery on Mount Royal.

On Tuesday night, they parked in front of a West Island hotel and left the urn in the backseat.

“Laughingly, we said we’d leave the ashes in the car ... because it’s not going to make a difference,” she said.

“But when we came out to the car the next morning, to go to the cemetery, the car was gone,” she added. “It’s just unbelievable.”

She says police told her the car was stolen at around 3:40 a.m., and that it was likely parked on the side of the road somewhere.

Now, she’s pleading with anyone with information on its location to come forward before the vehicle is sold or shipped off.

“Hopefully [the thieves] will have a modicum of morality,” she said. “They wouldn’t have known that the ashes were back there.”

“Keep the car, you can have the car, we would just really appreciate having the ashes returned.”

WHAT TO LOOK FOR

The vehicle is a silver 2020 Toyota RAV4 with Ontario licence plate CDNP 041.

The ashes are in a golden, rectangular urn, inscribed with “Winifred Jane Dominik, 1928 – 2021.” It’s sitting inside a burgundy felt bag, along with the certificate of cremation and a death certificate.

Anyone who has the ashes in their possession can return them to the hotel where the vehicle was stolen from, or a local police station.

Lewis says police told her the RAV4 is a particularly popular car to steal.

“An investigation is underway in this case,” a police spokesperson told CTV Montreal. “It goes without saying that we encourage anyone who notices that their vehicle has been stolen to report it to the police.”

Police also said there have been significantly more vehicle thefts in Montreal this year.

A judge has acquitted Maj.-Gen. Dany Fortin of sexual assault over an allegation that dates back to 1988. The allegation stemmed from his time at the military college in St-Jean-sur-Richelieu, Que., which the complainant also attended.

An attorney for a man accused of fatally shooting rapper Takeoff last month said Monday that the musician's death outside a Houston bowling alley was a tragedy but that her client says he's innocent of the crime.