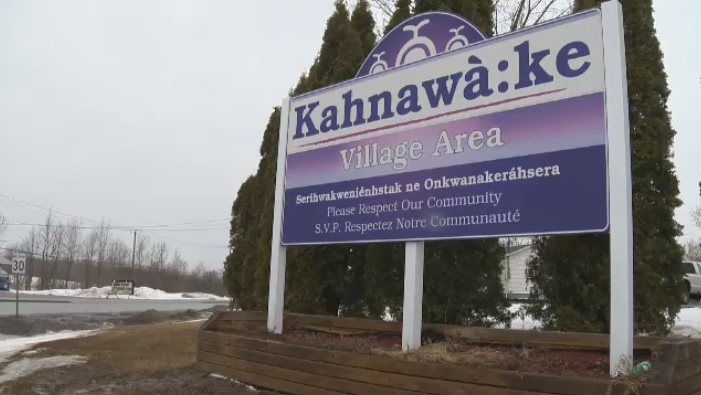 A sign welcoming visitors to Kahnawake, a Mohawk community south of Montreal.

MONTREAL -- Kahnawake peacekeepers issued fines to five people, on Sunday, including a Mohawk Council of Kahnawake Chief, for attending a birthday party inside a home in the community in contravention of Kahnawake COVID-19 Task Force rules.

“The fine is $1,000 plus costs. The total fine is $1,541,” said peacekeeper spokesperson constable Kyle Zachary.

The peacekeepers received a complaint from a community member in the evening about a gathering. When officers arrived, according to Zachary, they found a group of people watching a sporting event, and ordered them to leave.

“After 20 minutes, officers went back to the residence. Those who had not left the residence received fines,” Zachary said.

Among them was council chief Harry Rice, who also sits on the Mohawk Council of Kahnawake (MCK) COVID-19 Task Force, according to a statement issued by the MCK, on Wednesday.

“In order to maintain the integrity of the task force, Ratsénhaienhs (council chief) Rice has stepped down as an MCK political representative on the task force and the community protection portfolio, effective immediately,” reads the statement.

A second MCK Chief, Kahsennenhawe Sky-Deer has issued a public apology after attending the same birthday party, earlier in the day.

“As a leader and representative of the MCK, I should know clear and well what the directives are from the task force. Which at this point is ‘no public gatherings inside or outside,’” Sky-Deer said in a statement. “I must say that I do not think I am above anyone in the community and I must take responsibility and accountability for my actions.”

According to her statement, Sky-Deer wore a mask and kept her distance while at the gathering, and did not go inside.

She was not there when peacekeepers were called and has not been fined.