Julien to fans hoping Habs falter for shot at Lafreniere: 'There's no guarantee' 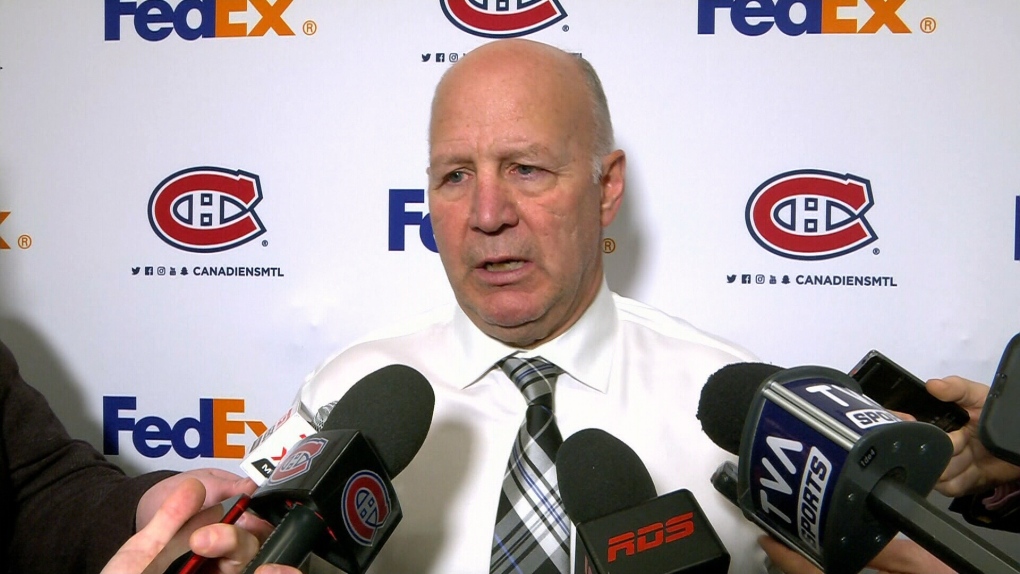 In this most unusual of years, a section of the team's rabid fan base finds itself pulling for the club to lose out in the qualifying round of the NHL's return-to-play plan -- if the blueprint does indeed go ahead this summer -- in hopes of snagging the first pick in the 2020 draft, and the right to select Quebec-born star Alexis Lafreniere.

The door to that unlikely scenario swung open last week when a placeholder club beat the draft lottery odds to claim the top spot, meaning one of eight teams eventually eliminated from the best-of-five showdowns leading into the typical four-round playoffs will secure the No. 1 pick, and then presumably choose the flashy winger.

Those eight losing franchises, which are set to come from a pool of 16 that also includes Edmonton, Toronto, Calgary, Winnipeg and Vancouver, will each have a 12.5 per cent chance of winning the No. 1 selection in a subsequent lottery.

Don't get Julien wrong, he'd be thrilled to see Lafreniere suit up in red, white and blue.

But not at the expense of the lifeline his 24th-ranked Canadiens have been handed by the league's proposed restart after the 2019-20 season was suspended in mid-March because of the COVID-19 pandemic.

"Trust me, I'd love to have this player on my team," Julien said of the 18-year-old from the Montreal suburb of St-Eustache. "But there's no guarantee even if we go out in the qualifying round that we would have that player. The only way to take a step forward is to go out there and play hard and play to win. If we win, then we're getting better as a team.

"If circumstances go the other way, then maybe we do get a shot at (Lafreniere). But we're all built to win. There's no reason in the world to think otherwise."

While some will disagree with that sentiment, Julien added it's "totally normal" to have different views and priorities.

"There's no issues there," he said. "Everybody's got their opinions and are entitled to them because some fans, and rightfully so, get excited about seeing the possibility of having that guy. But imagine if we didn't win the qualifying round and we don't get Lafreniere? How are the fans going to react then? It's one of those situations where as an organization, as a group of players, coaching staff, everybody, we go out there to win and we go out there to try and move forward.

"The best way to move forward is to do the best we can."

The Canadiens were limping towards the season's finish line, all but eliminated from playoff contention, when the schedule was halted amid the widening novel coronavirus outbreak nearly four months ago.

Montreal, which suffered through two eight-game losing streaks and a number of injuries to key personnel, had already shipped veterans Ilya Kovalchuk, Marco Scandella and Nate Thompson out of town prior to February's trade deadline with an eye towards the future.

That was before life in and out of hockey changed drastically.

"Unfortunately we didn't have a crystal ball," Julien said. "We let a lot of good players go that you wish we still had, had you known that was going to happen.

"But everything has a purpose and a reason."

While the Canadiens still have the playoff-tested Carey Price, Shea Weber and Brendan Gallagher, youngsters like Nick Suzuki, Victor Mete and Jesperi Kotkaniemi, if he gets a shot after spending a chunk of the season in the AHL, could be in the thick of the action when Montreal meets Sidney Crosby and the Pittsburgh Penguins to kick off the NHL's 24-team format.

"It's going to allow us to give some of our younger players some experience which probably they wouldn't get had we still kept those (veterans)," Julien said. "You take what you have. We have a great opportunity here to grow as a team."

Growing and gaining experience, however, isn't the primary goal.

"We're looking to win. That's the bottom line," Julien added. "If you're going to get better as a team, you need to win. The ethic of our sport is about winning.

"We want to do exactly that."

And for a franchise with a proud history that's missed the post-season three of the last four years, this second chance isn't one Julien wants to see pass by.

"A few months back, our mind was probably in an area where you're saying, 'Oh boy it's another long summer here,"' he said. "We need to take this situation and really run with it. We need to take advantage of what's been given to us right now and make the best of it.

"We've got a lot of potential. We have an opportunity to do something really great."

Getting a 1-in-8 shot at Lafreniere, however, would represent a decent consolation prize.