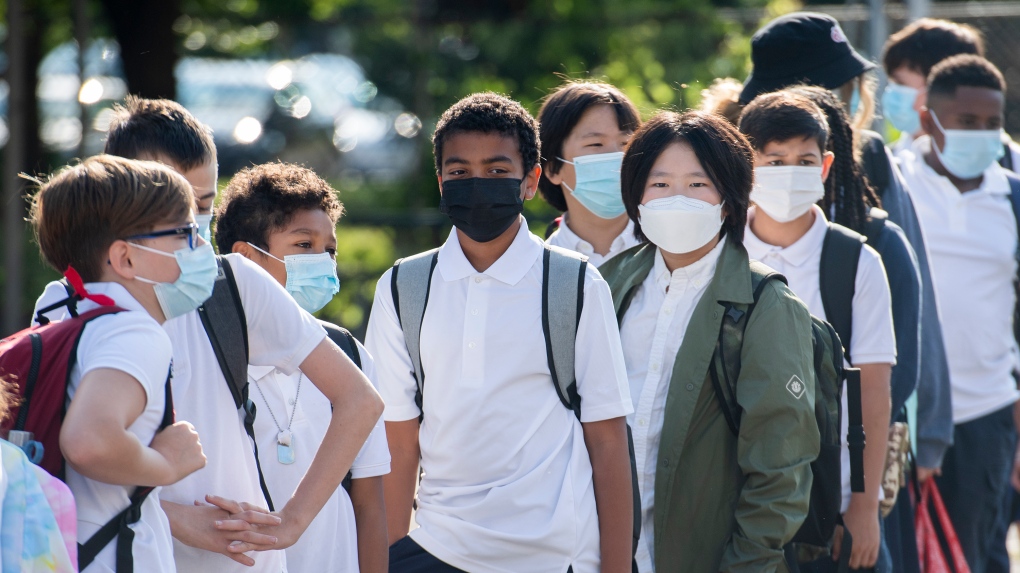 Students line up before attending class on the first day of school in Montreal, Tuesday, August 31, 2021, as the COVID-19 pandemic continues in Canada and around the world. THE CANADIAN PRESS/Graham Hughes

MONTREAL -- The Superior Court has rejected a request by Quebecers to immediately suspend the requirement to wear face coverings.

In his decision rendered Friday, Justice Frédéric Pérodeau refused to immediately suspend the application of the ministerial decrees and orders related to COVID-19 which require face coverings on everyone, regardless of the circumstances.

The judge's refusal does not put an end to their legal action, as they want this health measure to be abolished for good. Eventually, there will be a trial.

But until then, masks will remain on the faces of Quebecers, until the government decides otherwise.

The three people who brought this application to court — Francesco Platania, William Thomas and Marie Tranquille — believe that statistics and scientific studies show that COVID-19 is not a serious threat to the health of the population.

"Nor do the studies show the effectiveness of the face cover to prevent transmission of the virus," they claim, adding that its wearing causes "harmful and undesirable health effects," especially for children.

They want it scrapped immediately.

A request to suspend existing government regulations must meet specific criteria, including the urgency of the situation, which means that it is not possible to wait until trial to resolve the dispute.

Except that in this case, the plaintiffs did not demonstrate urgency.

"The rules on the wearing of face coverings have been in place for months," the judge wrote.

Nor have they shown that they would suffer "serious and irreparable harm" if the mask requirement were not immediately lifted.

"This is not one of those extremely clear and obvious cases that allow a court to intervene before trial," wrote Pérodeau. "Only a full debate on the merits will shed light on the issues raised and separate the wheat from the chaff."

-- This report by The Canadian Press was first published in French on Sept. 3, 2021.