Jedwab: In the 1995 Quebec referendum, did federalists pursue the right strategy? 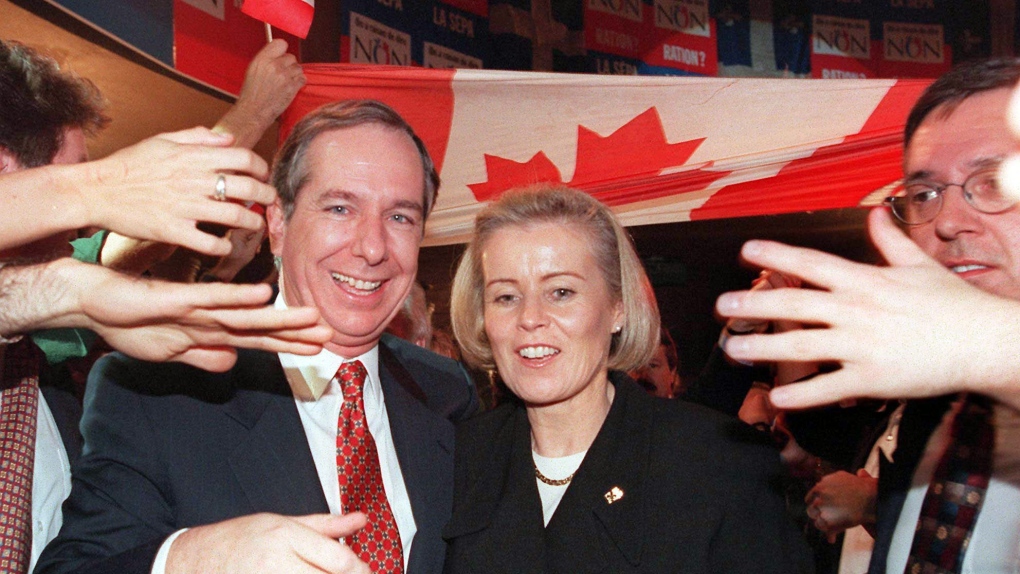 Quebec Liberal leader Daniel Johnson makes his way through a crowd of supporters with his wife Suzanne Marcil after the No victory in the Quebec referendum Monday night in Montreal. (CP PHOTO) 1995) 1995 (Jacques Boissinot)

MONTREAL -- On the evening of Oct. 30, 1995, following the announcement of the Quebec referendum results, several leaders of the federalist campaign gathered at a hotel on René Lévesque Boulevard to mark the historic night. But the mood was sombre, with many attendees breathing a collective sigh of relief in the aftermath of a victory that was secured by less than one per cent. Despite winning the popular vote, you couldn't shake the feeling on that evening that the federalist side lost the campaign.

The sovereignist campaign was led by the governing Parti Québécois, which controlled both the timing of the referendum and, perhaps more importantly, they had drafted the question that was put to the electorate. At the government's Oct. 2 launch of the campaign, the federalists put their faith in those opinion polls that gave them a comfortable lead of about ten points. While not many federalists expected so important a margin of victory, very few would have predicted so close an outcome.

Over the course of the campaign, federalists nervously watched the lead slip away. Two weeks before the referendum, several polls showed near-equal support for the Yes and No side at about 45 per cent each, with the remaining ten percent yet to decide how they were going to vote. For many referendum strategists, that 10 per cent, which were thought of as soft federalists and/or conditional sovereignists by both camps, were the object of urgent attention.

Polling revealed that many of the undecided Quebecers -all francophone - wanted to maintain some ties to Canada and as such, were attracted to idea that there would be a new economic and political partnership as proposed in the ambiguous referendum question. Federalist strategists seemed unable to refute the partnership idea.

Sovereignist spokespersons went further and insisted that they would secure an equal partnership with Canada on the terms they would ultimately dictate. Their ability to sell this imaginary partnership had more to with the messenger than the message as Parizeau appointed the very charismatic Bloc Quebecois leader Lucien Bouchard as the chief negotiator of this fictitious partnership between Quebec and Canada. Who better to sell the idea than Bouchard, the former federal Conservative cabinet minister who personified the ambivalence about Canada on the part of many undecided voters?

Federalists lacked an effective messenger to counter Bouchard. Spokespersons for the No campaign were very carefully scripted, and over the course of the campaign, the impression was given that the less said, the better. Quebec federalist strategists generally wanted prime minister Jean Chrétien to say as little as possible as many saw him as a liability in the campaign.

Ironically, towards the end of the campaign, the leader of the federalist side, former Quebec premier Daniel Johnson called on the PM to publicly commit to recognizing Quebec as a distinct society. Chrétien was rightly hesitant to do so and ended up making a statement about Quebec's distinctiveness that was easily dismissed by sovereignists.

As concerns over the referendum outcome heightened in the federalist camp, the PM felt he had to do something, and insisted on giving an address to the nation (an idea that divided federalist strategists). On Oct. 25, the PM made a nationally televised appeal for Canadian unity that was immediately demolished by Bouchard.

I had the opportunity to follow the referendum campaign closely. At the time, I served as executive director of the Quebec branch of the Canadian Jewish Congress (CJC) and our organization coalesced with Greek and Italian counterpart organizations to speak on behalf of the many members of our communities that were attached to both Quebec and Canada. Certain sovereignists routinely called our commitment to Quebec into question, describing our involvement in the referendum campaign as anti-Quebec.

Our three communities represented less than two per cent of the Quebec electorate, and we didn't see ourselves as having a considerable impact on the overall vote. Yet some sovereignists believed otherwise or, more likely, wanted francophone Quebecers to do so. They sought to give the impression to Quebec francophones that to vote No was to align yourself with the so-called "ethnic voters" that rejected Quebec. In this view, not only were there two classes of Quebecers, but there were also two classes of federalist voters, and the so-called ethnic ones were to blamed for defeating Quebec independence.

Our communities were hence positioned as the chief obstacle to the majority's desire to achieve sovereignty. In this case, however, it was not the majority of Quebecers to whom they were referring but the province's ethnolinguistic francophone majority. Premier Parizeau made this abundantly clear shortly after the announcement of the referendum loss, when he blamed "money and the ethnic vote" for the defeat and went on to say that 60 per cent of "who we (Quebecers) are" voted Yes. Thankfully many Quebecers denounced premier Parizeau's bitter outcry.

On Oct. 30, federalists secured a narrow referendum victory during a campaign where they constantly seemed to be on the defensive. Might there have been a better campaign strategy for federalists to pursue? Twenty-five years later, it is difficult to say. Ultimately, the 1995 Quebec referendum remains, without a doubt, one of the most important political events in modern Quebec history.