MONTREAL -- Thousands of people marched through Montreal on Thursday, one of many such demonstrations across Canada in honour of the victims of the country's residential school system.

The marches come on Canada Day and in the wake of the recent discovery of numerous mass grave sites containing the remains of Indigenous children on the sites where some residential schools once stood. The remains of over 1,000 children were recently found in unmarked graves in British Columbia and Saskatchewan.

"I think it affects everyone when you hear about 751 children in a mass grave in Saskatchewan. It's overwhelming," said Native Women's Shelter of Montreal director Nakuset, who organized the Montreal march. 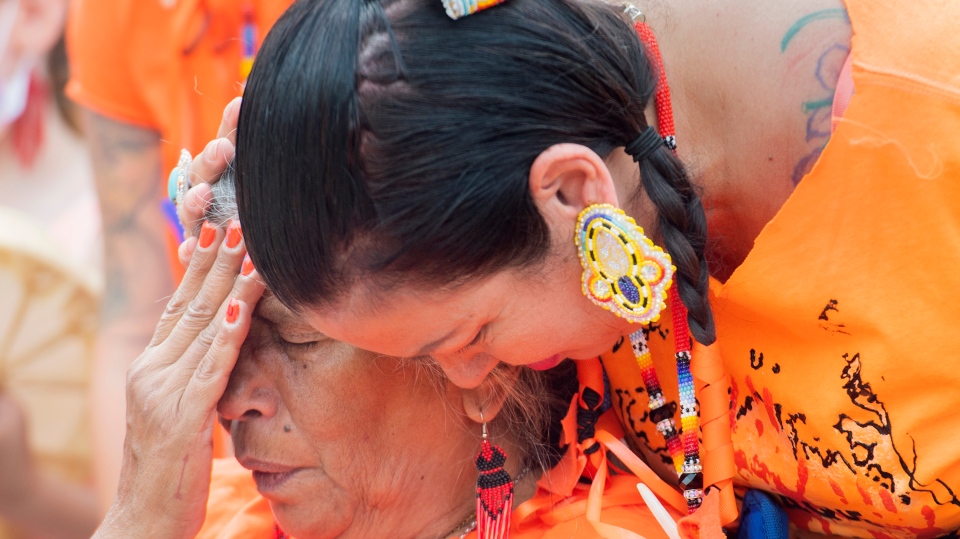 A woman is consoled during a gathering and march to honour Indigenous children, denounce genocide and demand justice for residential school victims in Montreal, Thursday, July 1, 2021.THE CANADIAN PRESS/Graham Hughes

As people, many dressed in orange, gathered at the park at the base of Mount Royal, songs were sung in those languages that were once forbidden.

In recent weeks, #CancelCanadaDay has trended on Twitter as Indigenous communities and advocates have called for annual celebrations to be replaced by a day of mourning and reflection.

The march wound its way to Place du Canada, where a statue of Sir John A. Macdonald, Canada's first prime minister and an architect of the residential school system, stood until it was toppled by protesters last year.

"There were people who didn't understand us and wanted to eliminate us," said Kahnawake resident Ka'Nahsohon Deer. "Sorry to say that as long as the wind blows and the grass grows and the water flows, we will always be here."