It's Judgment Day: Habs must fight for survival against Lightning Monday night

MONTREAL -- When Tampa Bay Lightning centre Blake Coleman slid the puck into the empty net to regain the three-goal lead on Friday night, flashes of the atomic bomb scene from Terminator 2: Judgment Day may have flashed through a few Habs fans' minds.

It is hard to not envision a bleak future down 3-0. 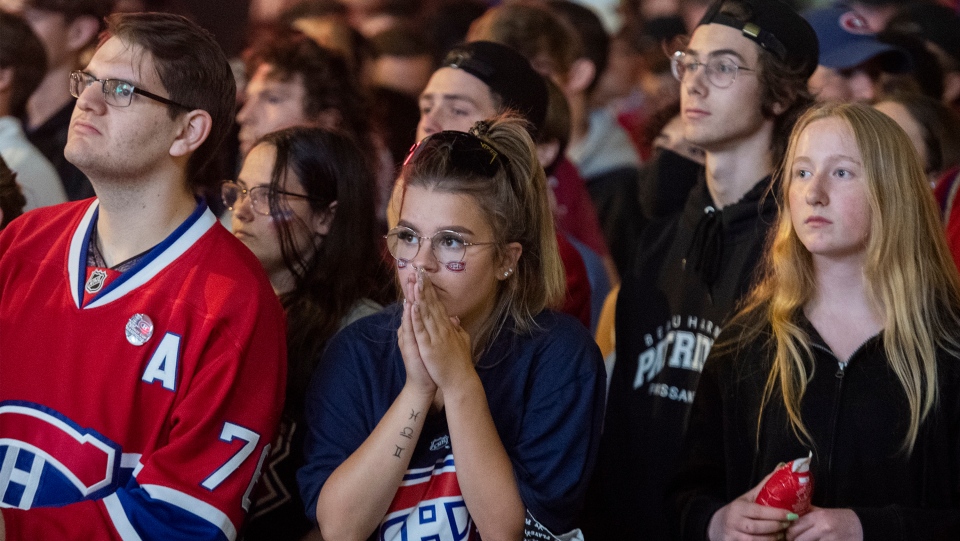 Montreal Canadiens fans look on outside the Bell Centre in Montreal, Friday, July 2, 2021, during Game 3 of the NHL Stanley Cup final against the Tampa Bay Lightning. THE CANADIAN PRESS/Graham Hughes

Skating onto the field of battle Monday night for Game 4 at the Bell Centre, the Montreal Canadiens must fight one battle in one night and leave all history, stats, baggage, insecurity and pressure in a burning pile in a parking lot.

"There's no fate but what we make for ourselves," Sarah Connor.

There is not much hope, but there are examples of teams coming back from 3-0 to win.

Is it helpful to dredge up these examples?

Are this year's Habs similar to the historic 2004 Boston Red Sox or the Toronto Maple Leafs team that won the Stanley Cup the same year Joe Biden was born?

None of that matters.

Tonight, the T-1000 is charging with knives for arms, and the Habs just need to stop him with all available weapons.

Win once in front of home fans and Montreal won't join the 1998 Washington Capitals on the "teams swept in the finals" list.

Weird fact: That Capitals team was the fourth straight team to get swept in a Cup finals and became the second victim in a row of Scotty Bowman's terminator-like Red Wings of the late '90s.

Tampa has so many weapons and they are not afraid to use them. Montreal has trailed for almost the entire series and has never led in a game heading into tonight's game. The score has been tied for just over 44 minutes, and Tampa has led for over 135 minutes.

Getting a puck past Andrei Vasilevskiy is, to state the glaringly obvious, desperately needed, and it needs to be done, while keeping the multi-weaponed attack in blue and silver back.

And not to heap too much on the Habs starting shot-stopper, but heading into the finals, Price was sitting on a crisp 2.02 GAA and .934 SV%.

The previous sentence will mean nothing if he locks in, arms up, and steals a game at the Bell Centre, while a few of the Habs' forwards put some holes in the liquid metal alloy of Tampa's netminder.

"The T-1000 will definitely try to reacquire you there," Terminator.

Coach Jon Cooper has taught his players how to take pucks off the Habs with ruthless efficiency.

It doesn't help when those in the bleu-blanc-rouge sweaters make it easier.

It's a pretty simple rule: If you don't give the other team's players the puck, then those players cannot shoot the puck on your net.

Protect the asset. It's the rule of any successful operation. If the Terminator let John Connor go get his stuff from his foster parents' house, the movie ends much sooner.

"You two. You're on weapons detail," Sarah Connor.

Three battles in, it might be time to release a few weapons that Tampa has not seen.

Habs interim coach Dominique Ducharme will not pull Price for Jake Allen (of course), but hinted that a few changes might be coming.

Could a Tomas Tatar or Alexander Romanov get a skate?

Throw a variable into the mix Tampa has to adjust to.

"The future rolls toward us. I face it, for the first time, with a sense of hope," Sarah Connor.

Remember this: The team currently leading 3-0 and looking for a second-straight cup is the same team (more or less) that was shocked and swept in the first round by the Columbus Blue Jackets TWO YEARS AGO!

Canadian teams never seem to learn how to lose and come back the next year.

The teams north of the border who have made the cup finals since 1994 have never returned to the dance to fight again.

It feels like they are so permanently damaged by losing that they forget there's a garage to pull into for repairs.

The Habs need to be more T-1000 if they don't pull off the next to impossible and win four straight games against the best team in hockey at the moment.

They need to get up, watch the liquid metal bullet holes reform, re-arm and go again.

Montreal needs to look at the 2008 Pittsburgh Penguins, 1995 Detroit Red Wings or 2018 Lightning as examples to replicate. It's time to throw away comparisons to teams that existed before the Internet and iPods and look at how to be better than Tampa Bay next season.

On that note, when heading into the final series, it might be worth spending more time looking at the team you're about to play than reflecting back on one almost three decades ago.

LISTEN ON CJAD 800 RADIO: What do the Habs, Star Trek and The Terminator have in common? CTV Montreal's Daniel J. Rowe weighs in.