Many in Montreal’s Ukrainian community woke up to devastating news that their loved ones back home were under siege overnight Wednesday when Russian forces launched an invasion.

On Thursday afternoon, Ukraine’s health ministry said so far the death toll from the attack was 57, with 169 more wounded.

To show their solidarity with the people of Ukraine, dozens of people gathered at McGill University Thursday afternoon to condemn the Putin regime and the destruction in their homeland.

“I got a call from my aunt being bombarded in the city of Mariupol,” one protester told CTV News.

“A lot of people, when they get that, they’d be in shock. And I’m in shock and I’m enraged.” 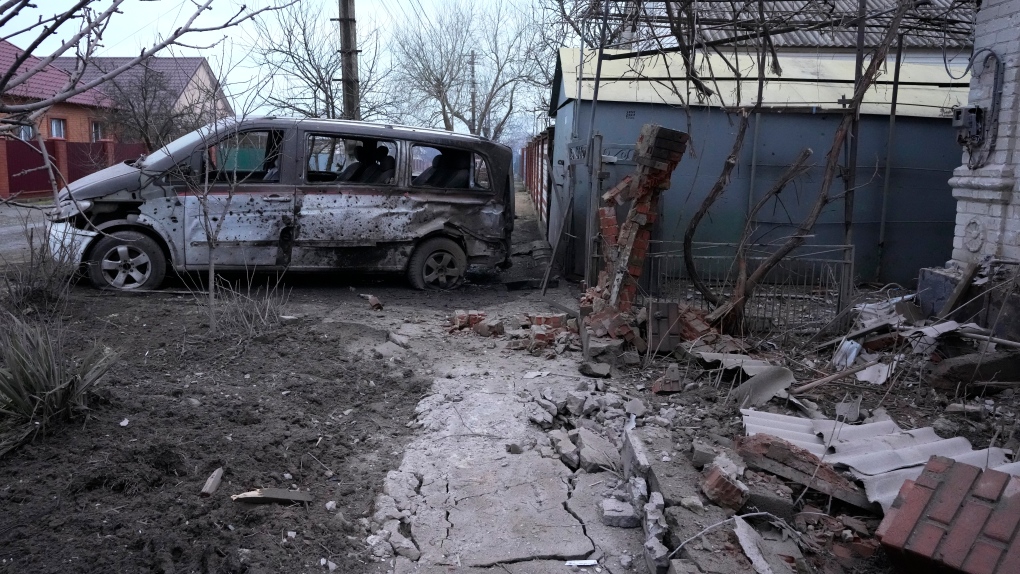 As they waved Ukrainian flags and held signs that said “Stop war in Ukraine,” they shouted “Glory to Ukraine." But beneath the rallying cry there is rage and fear for loved ones left behind.

“My two sets of grandparents are there, they’re in their 80s. My uncles and aunts, a lot of my cousins, like, some of my cousins are thinking of joining the defence force right now,” said another protester. 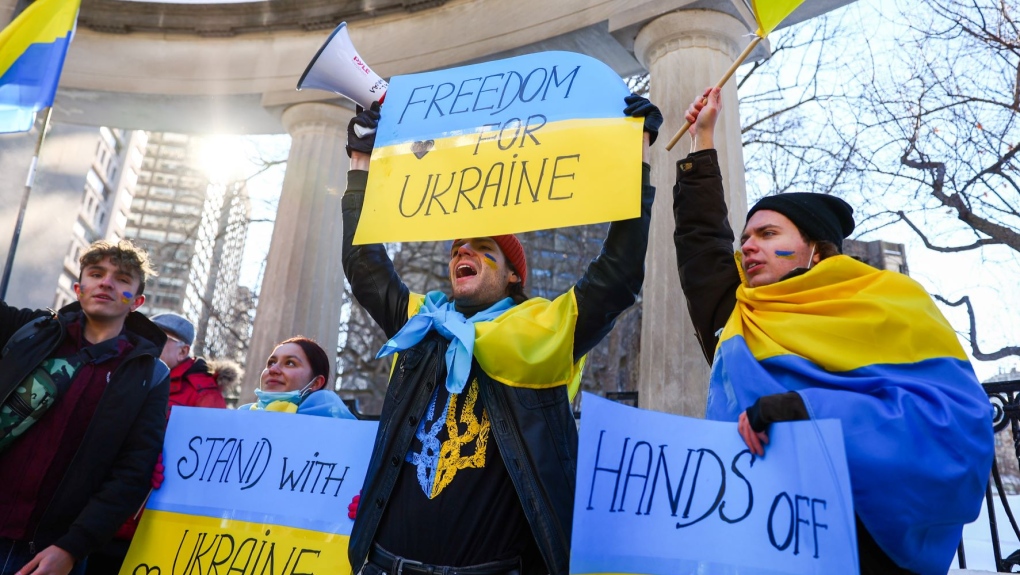 Demonstrators protest Russia’s military action in Ukraine, at Roddick Gates in Montreal on Thursday, February 24, 2022. On Thursday, Russia launched the largest attack by one state against another in Europe since the Second World War. THE CANADIAN PRESS/Evan Buhler 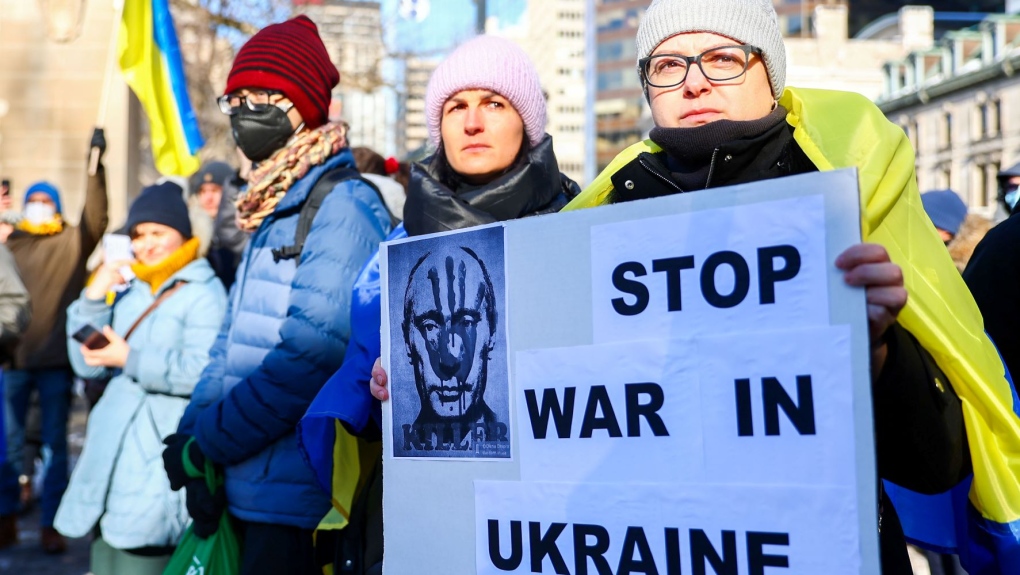 Demonstrators protest Russia’s military action in Ukraine, at Roddick Gates in Montreal on Thursday, February 24, 2022. On Thursday, Russia launched the largest attack by one state against another in Europe since the Second World War. THE CANADIAN PRESS/Evan Buhler

Organizers called for a united front against Russia and for Canada, and the world, to do more.

“It feels like a nightmare, it feels numb because we’re here and we cannot do much,” said a member of the demonstration.

It was the first of several demonstrations planned in the coming days, but earlier in the day a more somber gathering took place at a church in Montreal’s Rosemont borough.

Congregants at the Assumption Of Blessed Virgin Mary Church prayed for family and for those that were killed.

Emotions were raw, and, for some, there was a sense of powerlessness being so far away.

“For me, it looks like World War Three because nobody expected, I think in the west, for President Putin to start this war,” said Rev. Ihor Oshchipko.

Praying for Ukraine at special service this morning held at Assumption of the Blessed Virgin Mary Church in Rosemont. I met Ruslana Molodtsova there. “My mom is 84.  To go downstairs from the fifth floor—she says, ‘just pray because I won’t make it.’” pic.twitter.com/jaU7Nj6RrZ

Ruslana Molodtsova is one of many in Montreal hoping for a peaceful outcome to the conflict.

“My mom is 84. To go downstairs from the fifth floor, she says, ‘Just pray because I won’t make it.’”

In the morning, all parties in the National Assembly condemned the Russian invasion, starting with Premier François Legault, who tweeted that his "thoughts are with the Ukrainian people."

His minister for international relations, Nadine Girault, described the situation as "absolutely appalling."

She affirmed that Quebec supports Canada's decision to impose economic sanctions on Russia.

Quebec is also ready to offer "material support" and humanitarian aid, and will open its doors to refugees, she added, without giving further details. 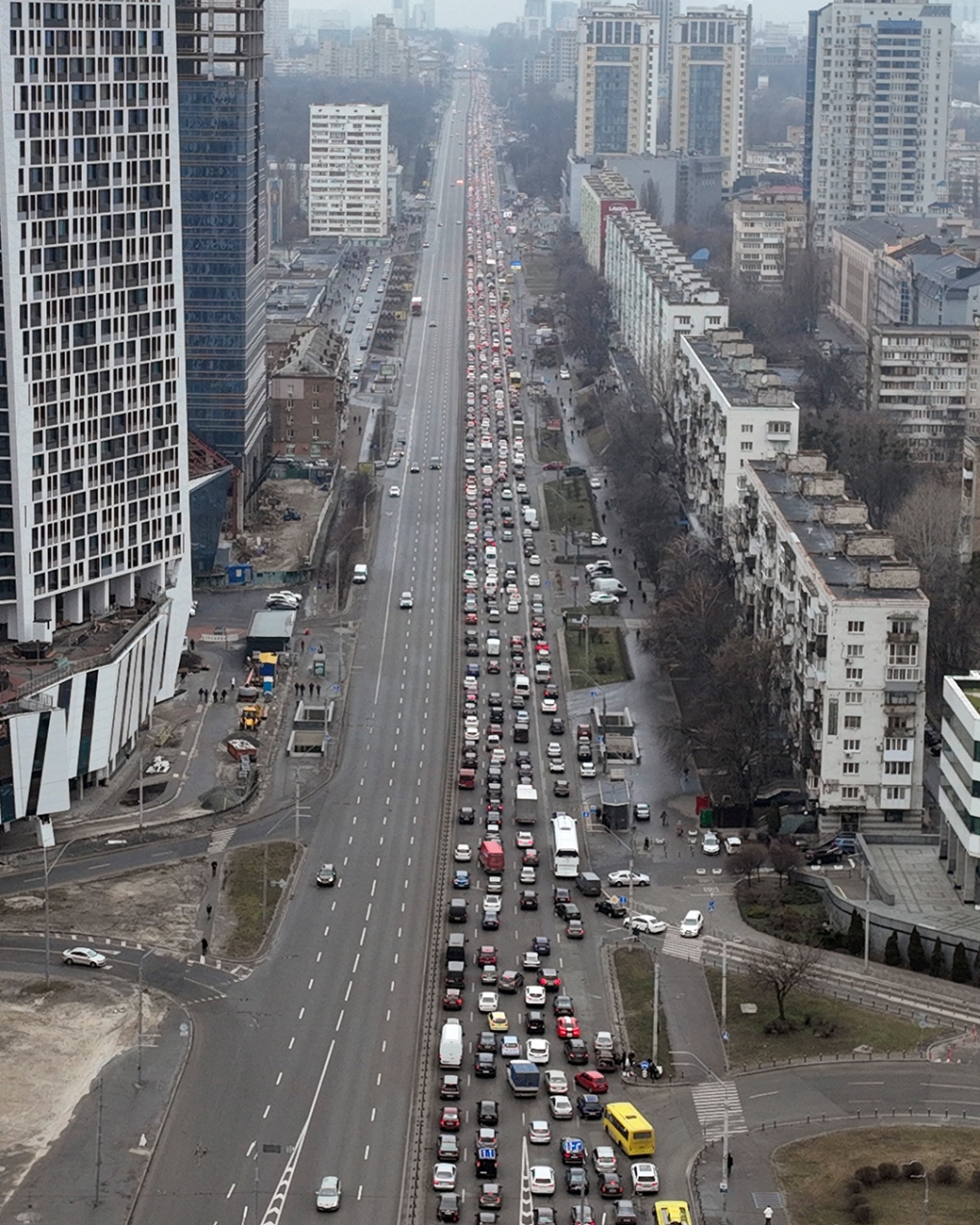 In a Facebook post, Legault expressed solidarity with the people of Ukraine and condemned “the Russian aggression in Ukraine.”

“Quebec will do its part to welcome Ukrainian refugees in the coming weeks and months. We also stand ready to offer humanitarian material assistance wherever possible,” the premier wrote on Facebook.

On Thursday afternoon, Montreal Mayor Valerie Plante tweeted a photo of the Ukrainian flag being raised at City Hall and expressed her “solidarity with the Ukrainian people and their community in Montreal.”

The war in Ukraine is likely to affect Quebecers in more ways than one, according to Finance Minister Eric Girard, warning that, to start, gas prices could rise further.

If a war with Russia continues, it will increase pressure on the markets, create more inflation, and reduce economic growth, he explained Thursday.

The budget he plans to present on March 22 will therefore contain a reserve to counter the possible economic effects of the Russian-Ukrainian conflict.

"To the extent that there is more uncertainty, it may be necessary to have larger reserves," said Girard in a press scrum at the National Assembly.

He said depending on how long the conflict lasts, Quebec may see higher inflation and might see a more prudent budget, set to be unveiled next month.

“The developments that we’re witnessing over the last 24 hours are preoccupying and we’re concerned for the population of Ukraine first and it creates uncertainty so we need to watch and observe and see how long it will last, how permanent these impacts are,” he said. “At this point, what we have is additional uncertainty and volatility.”

Liberal finance critic Carlos Leitao had just called on the minister to rewrite part of his budget and set aside "a few billion dollars."

He also warned that the Russian invasion of its neighbour will affect the price of oil, which is already over US$100 a barrel.

"It will continue to accelerate... inflation at five per cent is almost like the good old days," he said.

"It will go to a lot more than that in the coming months. The effect of inflation is cumulative: prices go up, up, up and it's very rare that they go down."

Upon arriving in the legislature, Economy Minister Pierre Fitzgibbon stated the obvious: "This is not good news."

But he went on to give some more reassuring analysis.

"Quebec companies that are dependent on Ukraine or Russia, because there may be some, we will help them. We've done it in softwood lumber, we've done it in every conflict," said Fitzgibbon.

"So I want to reassure all Quebec companies, if they have financial difficulties due to the lack of international relations that will be happening, we will be there," he added.

For Gabriel Nadeau-Dubois of Québec Solidaire, the scenes coming out of Europe are "extremely worrying" and "unprecedented for my generation."

"It's unacceptable," he said, adding that he sympathizes with the Ukrainian community in Quebec, which is going through "extremely difficult" times.

"It's hard to imagine what it means, to know that your native land is invaded in this way by a foreign power," he said.

The parliamentary leader of the Parti Québécois, Joël Arseneau, spoke of a "dark day for democracy in the West," calling for serious economic repercussions.

"What we want is for NATO and the countries of Europe and North America to come together and impose the strongest sanctions," he said.

With files from CTV Montreal's Matt Grillo and The Canadian Press