An interactive exhibit arrived in Montreal to teach youth about human trafficking in Canada, a crime that disproportionately affects women, girls, and transgender people.

According to Public Safety Canada, Montreal is one of the five cities in Canada where human trafficking has been reported the most.

"I learned that human trafficking is a really common thing, especially in Montreal," said 14-year-old Zao Cheron, outside of the touring exhibit currently at Montreal's La Ronde theme park. "It can happen in front of you, and some people are really scared to tell other people about it."

When asked how he can help his peers, 14-year-old Gio Laroche said, "I think that I can make them more comfortable around me so they'll be able to talk more easily with me... and after that I'll call the [human trafficking hotline] number and just talk about it."

Ninety per cent of victims were women or girls. According to the Canadian Centre to End Human Trafficking, 2 per cent were transgender and gender non-conforming people -- a significant number as they only make up 0.24 per cent of the population. 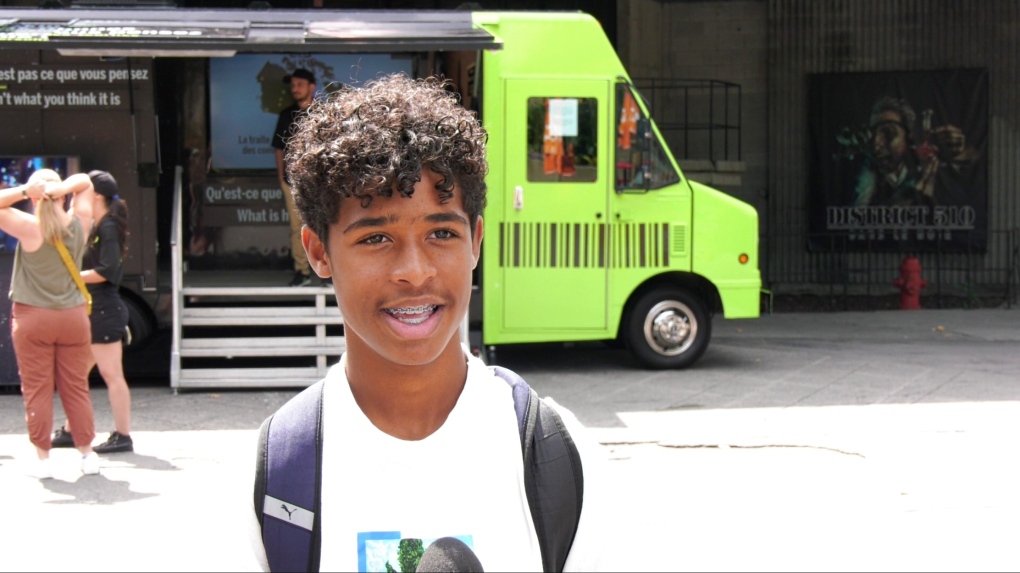 14-year-old Zao Cheron said the exhibit showed him how he can support someone who is a victim of human trafficking. (CTV News)

The centre said there are a lot of misconceptions about what human trafficking is and who it affects. For one, trafficking isn't the same as smuggling.

"People think of it as something that happens to other people in other countries or involves shipping people across borders," said Julia Drydyk, executive director of the Canadian Centre to End Human Trafficking.

"In reality, human trafficking is a domestic issue. It's being experienced by Canadian women and girls, and traffickers are also largely Canadian."

From 2010 to 2020, nearly 3,000 cases of human trafficking were reported to police in Canada. Those numbers don't represent the actual situation, as many cases go unreported.

"Traffickers will recruit and groom individuals from Quebec, many of whom don't speak English, and then actually move them to other provinces that are English speaking as a way of receiving higher price premiums within the commercial sex industry while also keeping their victims more dependent on their trafficker and making it harder to reach out," said Drydyk.

The exhibit was created by Public Safety Canada and is aimed at educating young people, one of the most at-risk demographics.

"Two-thirds of human trafficking cases would involve someone known to the victim, either a family member, a friend, or someone they know, a romantic partner," said Leticia Hernandez-Frias with Public Safety Canada.

If you or someone you know is at risk of human trafficking, Public Safety Canada advises calling 911 or the Canadian Human Trafficking Hotline at 1-833-900-1010.