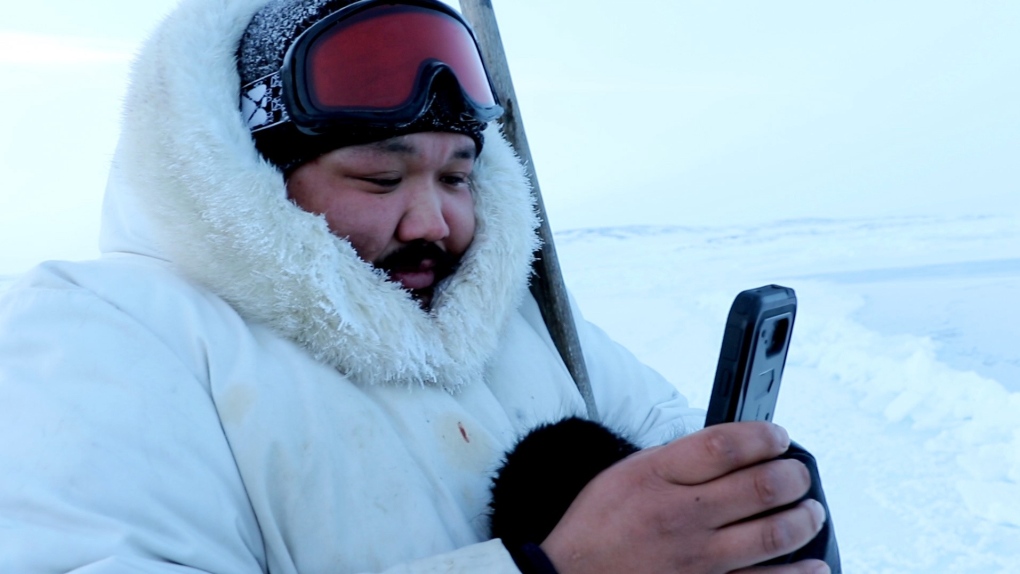 Puasi Ippak tests out the Siku mobile app in a handout photo. A social media app geared towards the outdoor lives of Inuit launched Wednesday with features that tie traditional knowledge to smart phone technology. THE CANADIAN PRESS/HO-Arctic Eider Society

HALIFAX -- A social media app geared towards the outdoor lives of Inuit launched Wednesday with features that tie traditional knowledge to smartphone technology.

It also integrates modern weather, sea ice and satellite imagery, while allowing travellers to add in the traditional terms for potentially perilous conditions using their own language.

The app was created by a team of developers assembled by the Arctic Eider Society, a charity based in Sanikiluaq, Nunavut, and launched at a conference in Halifax on Wednesday.

Joel Heath, the executive director of the society, says the project was born from a desire by Inuit elders to document and share oral history with young people.

Lucassie Arragutainaq, manager of the Sanikiluaq Hunters and Trappers Association, says "we're copying what our parents used to do, but in modern ways."

Heath said during the launch at the ArcticNet conference that Inuit hunters are out on the ice or land most days gathering food for their communities, and they have unique needs that existing social media like Facebook and Twitter don't address.

Arragutainaq told an audience of several hundred that after trips around the ice of his community in Hudson Bay, hunters would convey to others what they'd seen and where it was safe to travel on foot or Ski-Doo.

He quoted Peter Kattuk, a hunter who died recently, saying, "It's time for the harpoon and the computer to work together," referring to how hunters will often test ice with harpoons.

Through the app, hunters can upload such information into Siku and tag other areas of interest, such as particular wildlife they've tracked.

Safety is among the key attractions of the program, said Heath.

During his presentation, he explained how one hunter testing Siku had placed a triangular warning sign on a map of an ice field near Sanikiluaq in the spring, providing a traditional Inuit term for its dangerous condition.

"It looks like a normal tidal crack ... But he knew the difference that if the wind comes across this kind of crack ... It can break it open," he said.

Hours later, the satellite map showed how the crack had widened enough that Ski-Doos on the wrong side of it wouldn't be able to return.

"It shows how (a hunter) taking a few photos and tagging can mobilize Indigenous knowledge," said Heath.

There are 80 Arctic species listed under Wildlife, including birds, fish and land animals. Users can make posts that include observations of individuals, groups, tracks, nests and dens, as well as fields such as habitat, diet, body condition and other details about rare or unusual events.

The Social button is where users can post about hunting trips and share photos, tagging them with location and other information.

Sea Ice provides users with the ability to report on conditions, while the Tool button provides options to capture data with scientific instruments, such as an ice core or water sample.

The project was the winner of the 2017 Google.org Impact Challenge in Canada, bringing $750,000 in funding.

Siku is available as an online platform at SIKU.org, while the mobile app runs on Android and iOS.