Indigenous leaders in Quebec are lamenting the fact that their communities' priorities have been largely ignored during the election campaign.

Atikamekw Grand Chief Constant Awashish said he wasn't surprised that issues such as Indigenous self-determination, land use, resource sharing or "nation-to-nation" partnerships were overlooked in the campaign.

The issues are not championed by political parties, he said, because party leaders do not need Indigenous votes to get elected.

The Atikamekw community is calling for a series of measures -- called the Joyce Principle -- to be enshrined in Quebec law.

It is a list of recommendations to the Quebec and Canadian governments on how to combat systemic racism in the health and social services sector.

Joyce's Principle is named after Joyce Echaquan, the 37-year-old Attikamek mother of seven from Manawan who died in the Joliette hospital in 2020. Before she died, she used her phone to film racial insults of staff members.

The Coalition Avenir Québec (CAQ) government has refused to adopt the Joyce Principle because it refers to systemic racism in Quebec institutions -- a phenomenon that CAQ government says does not exist in Quebec. CAQ leader François Legault had to apologize to Joyce Echaquan's widower after he said during the TVA leaders' debate that the situation at the Joliette hospital was "fixed."

Chief Sipi Flamand of Manawan, an Atikamekw community around 200 km north of Joliette, is also not surprised by the absence of Indigenous issues during the campaign.

"It is very important that the different parties work together to resolve the issues raised by the Indigenous communities," said Flamand. 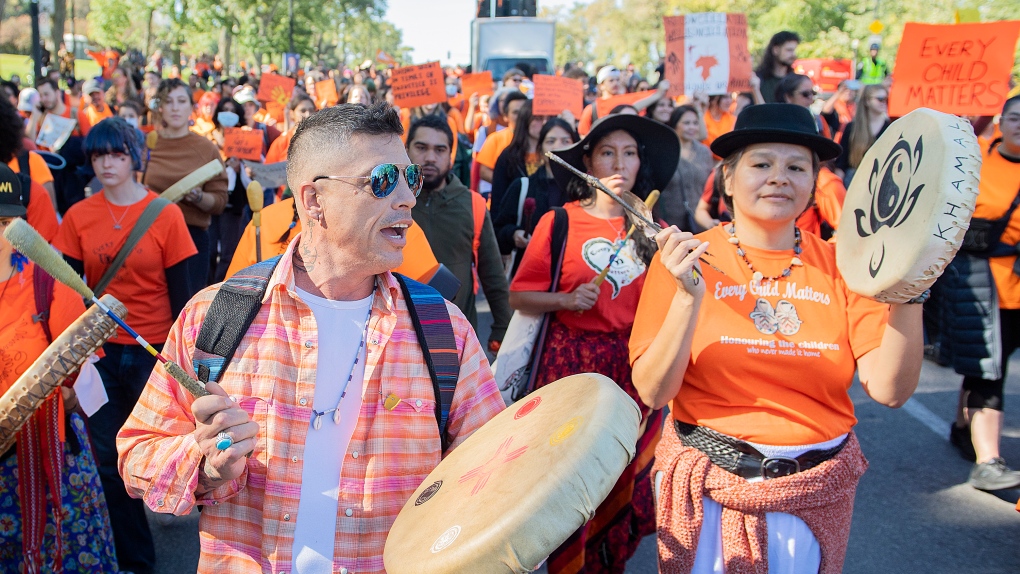 People take part in a march on National Day for Truth and Reconciliation in Montreal, Friday, September 30, 2022. THE CANADIAN PRESS/Graham Hughes

Chief Awashish would like to see the political class in Quebec be more aware of Indigenous issues and understand the communities more.

"I think First Nations are more involved at all levels politically, but what is sad is that (political leaders) only talk about our peoples when something bad happens; that's the image that society has, collectively," he said. "We need more education, we need more awareness, for everybody, but mainly for the non-Indigenous elected officials: they need to see us differently, they need to know us differently, so they can see us as the solution of the future."

Legault was confronted live on Friday with the reality of Indigenous people who feel rejected by his government, as he spoke to federal residential school survivors on National Day of Truth and Reconciliation in Abitibi-Témiscamingue.

Legault promised that if re-elected Monday, he would spend more time with First Nations communities.

"The parties don't talk about it enough. We are forgotten. We just talk about Quebecers," said Edouard Kistabish after the ceremony on Friday. "It's going to take time before we trust. We have experienced too much rejection."

Speaking to reporters later Friday, Legault said his goal is to reach agreements with First Nations and Inuit on such things as protected areas and economic development. He said the negotiations are taking a long time because each of the 11 nations in Quebec wants its own agreement. The Quebec government has signed five agreements so far.

Legault also said that protecting Indigenous languages would be a priority in a future mandate, and suggested that a CAQ government would introduce a bill to pass something like Bill 96 to protect their languages.

In Montreal, Liberal leader Dominique Anglade told reporters that if elected, she would introduce the Joyce Principle in her first 100 days in office. She also promised that the National Day of Truth and Reconciliation, Sept. 30, should be a statutory holiday in Quebec, as it is at the federal level and in some provinces.

Legault refused a year ago to make Sept. 30 a provincial holiday, citing a loss of productivity if Quebec added another vacation and arguing that the initiative would be too costly.

Taiaiake Alfred, a (Kanien'kehá:ka) Mohawk writer and political strategist from Kahnawake, south of Montreal, said there is simply not much incentive for political parties to engage with First Nations and Inuit communities in provincial elections.

"The relationship between colonial governments and First Nations should be on a different level," he argued. "They are a nation, and we are a nation. We should be relating to them on a collective level, rather than drawing them into our politics and getting involved in theirs.

"Whoever is elected politically - whether it is a nationalist, federalist or separatist government - is irrelevant to those living in Kahnawake, he said. It doesn't make any difference how the Crown and Quebec identity manifests itself to us; it's never been a factor, so we don't get involved."

King Charles' whirlwind three-day trip to Canada in May 2022 cost Canadian taxpayers at least $1.4 million, or well over $25,000 per hour, according to documents obtained by CTVNews.ca.

A Palestinian refugee who made a desperate plea for proper housing in Canada has now been welcomed by a Jewish family in Ottawa.

FIFA opened a disciplinary case against Croatia on Tuesday because of its fans' taunts aimed at Canadian goalkeeper Milan Borjan, who has Serbian family ties, during the teams' World Cup game.

Canadians appear to be slowly cutting back on their use of plastic straws and grocery bags ahead of a national ban on such items that will take effect next month, new statistics show.

The flu shot is one of the best weapons in Canada’s arsenal to combat what health experts are calling a 'multi-demic' of flu, respiratory syncytial virus (RSV) and COVID-19 that is making people sick and straining health-care systems.

Royal Bank of Canada signs deal to buy HSBC Canada for $13.5B

Royal Bank of Canada has signed a deal to acquire HSBC Bank Canada for $13.5 billion in cash.