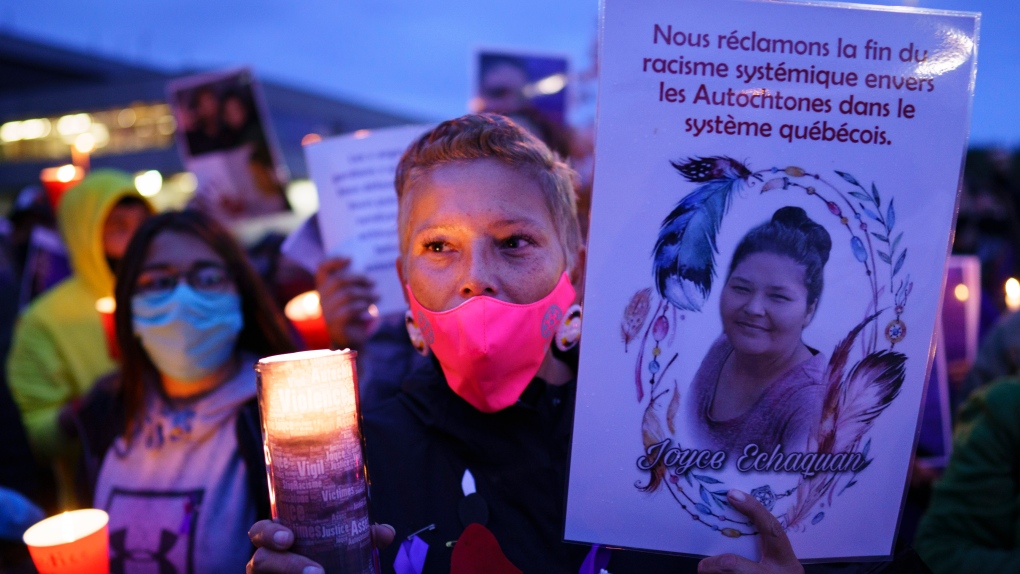 A woman attends a vigil in front of the hospital where Joyce Echaquan died in Joliette, Que. on Tuesday, September 29, 2020. A nurse has been fired after Echaquan, an Indigenous woman, who was dying Monday night in hospital was subjected to degrading remarks. THE CANADIAN PRESS/Paul Chiasson

MONTREAL -- Two months after Joyce Echaquan's tragic death at the Joliette hospital, Indigenous and non-Indigenous artists banded together on stage to celebrate the life of the 37-year-old Atikamekw mother.

The show was recorded last week in Joliette and can be watched for free online starting this Thursday. It will feature Elisapie, Ariane Moffatt, Florent Vollant, Patrick Watson, Natasha Kanape Fontaine and more.

Ther concert is meant to be a sign of reconciliation between Indigenous and non-Indigenous people and will pay tribute to Echaquan, whom many only associate with the tragic video she shot in the hospital before taking her last breath.

"I want people to know Joyce for what she was before. She was so smiling, she helped others, she adored her children," said her cousin Jemmy Echaquan. "I wanted to be remembered that way."

Executive director of the Lanaudiere Native Friendship Centre Jennifer Brazeau knew Joyce Echaquan and emphasized that the goal of the show was, among other things, to overcome tragedy to "shine the beauty of our culture."

"For me, it's really important that we show young people that there is hope, to use Joyce's events to inspire us, to have the courage to act," she said. "You don't just have to see the tragic side. We must also see that she was a woman, a mother, a sister, a cousin. She had a life that surpassed what we saw on Facebook."

Co-artistic director of the show Elisapie said she wanted to offer beauty to spectators, regardless of their origin, which is in great need these days.

"We wanted sweetness, beauty and joy too. I think people like Shauit and Yves Lambert are happy," she said.

Viewers can expect several joint numbers between Indigenous and non-Indigenous artists, which will highlight all cultures.

"We will have moments when there will be a real musical sharing, of cultures. That's what we really wanted to highlight. We have to learn to be closer, to be curious, to be there for each other," said Elisapie.

According to Jemmy Echaquan and Brazeau, Joyce Echaquan's tragedy will at least have had the effect of mobilizing and sensitizing the population to the situation of Indigenous people.

"There was still a shock, a realization. For me, it still gives me hope," said Brazeau. "My big worry is that this is an event that is happening and that over time it falls a bit off the radar. For me, it's important that we don't see another tragedy before we continue to work on these issues."

Elisapie, who sounded a loud cry from the heart on social networks to Premier Francois Legault during the tragedy, deplores the fact that the government still denies the presence of systemic racism in the province.

"It's very clear that the systems have made Indigenous people despised for too long, experienced violence too," she said.

The Waskapitan benefit show (which means "Come closer") will be broadcast online from Thursday until Jan. 3 on the waskapitan.org website.

Donations collected will be used to improve the conditions of established Indigenous communities in urban areas. In particular, there is talk of opening a clinic for Indigenous people in Joliette.

"It's really money that will be taken for concrete things," said Elisapie.