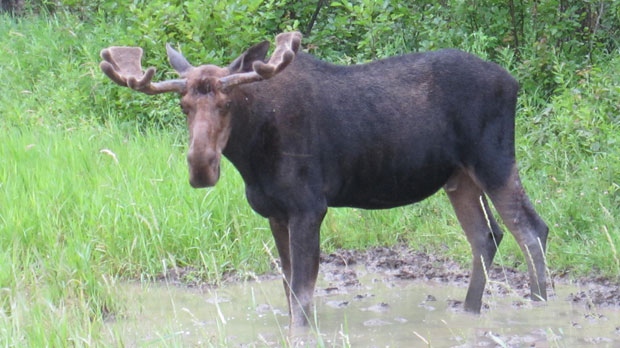 LAC-SIMON, QUE. -- The representatives of the Anishinabeg (Algonquins) in the issue of moose management in La Vérendrye Wildlife Reserve have sent a new proposal to the Quebec government, in an attempt to resolve the impasse of last fall.

Without revealing the content of the proposal, the Anishinabeg negotiators said they wanted to collaborate with the various ministries, but they also won't accept certain principles.

"One thing is certain: we will do everything to ensure that the rights of the Anishinabe nation are respected," said one of the negotiators, Lucien Wabanonik.

NO CENSUS FOR 25 YEARS

Wabanonik, who is also a member of the Lac-Simon council, near Val-d'Or, adds that the parties do not agree on the presence of moose in La Vérendrye Wildlife Reserve and the surrounding area.

"The minister said it's been 25 years since there have been studies on the situation of moose in the wildlife reserve," he said.

"He's talking from both sides of his mouth right now. We are on the ground -- we can see the situation. This is why we are asking for a moratorium."

The Anishinabeg negotiators are currently awaiting a response from Minister Ian Lafrenière on their proposal. They will submit their recommendations to the leaders of the various communities in the coming days.

The Algonquins say that while they want to show openness in their negotiations, they nonetheless will stay tough when it comes to logging in La Vérendrye Wildlife Reserve.

"We expect a lot of resistance from the Ministry of Natural Resources," said Wabanonik.

"We are also asking for a moratorium on logging. These are two issues that are interrelated, since we are dealing here with the protection of moose habitat."

If the habitat is threatened, he said, "so is the moose herd. Without this moratorium, forget about biodiversity, forget about water quality."

The logging doesn't only affect moose, he added.

"Humans are also affected by these cuts."

On Lafrenière's side, a spokesperson for the ministry said they won't comment on the situation, saying they do not want to negotiate in the public square.

"We will take the time to analyze the submitted proposal. We are still committed to finding a negotiated, lasting and mutually acceptable solution."

Several members of the Algonquin Nation had erected checkpoints at various locations in La Vérendrye Wildlife Reserve last fall, during the hunting season.

All of this had created strong tensions between Indigenous and non-Indigenous hunters, requiring the intervention of Quebec provincial police on several occasions.

At the beginning of October, the leaders of ZEC Petawaga, located in the south of the reserve, had requested and obtained a court injunction calling for the lifting of the Algonquin checkpoints on Lépine-Clova road.

This report by The Canadian Press was first published March 4, 2021.