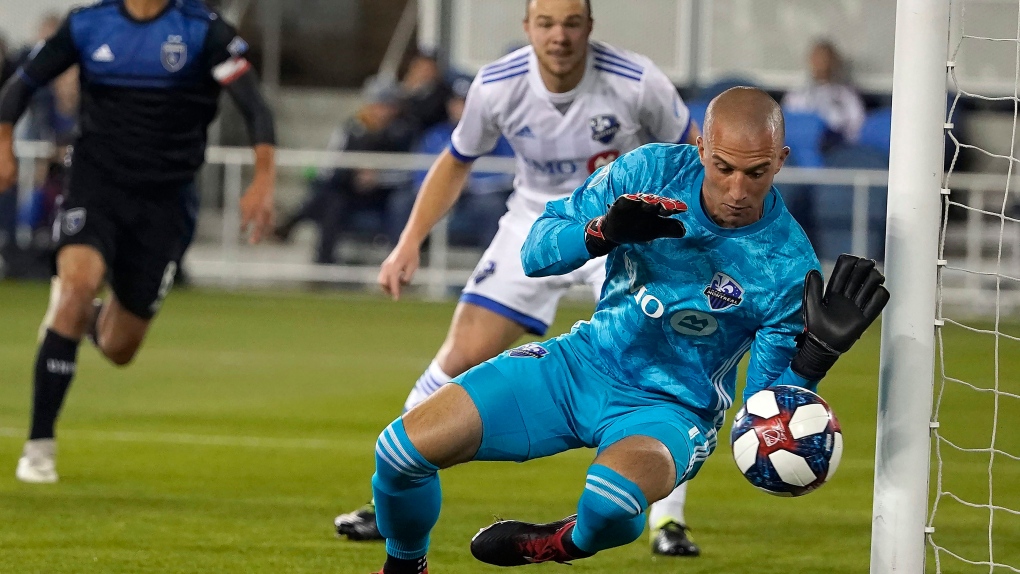 Montreal Impact goalkeeper Evan Bush (1) blocks a shot on goal by the San Jose Earthquakes during the first half of an MLS soccer match in San Jose, Calif., on March 2, 2019. The surging Impact look to build on their stellar away record when they face struggling FC Cincinnati on Saturday, but Montreal goalkeeper Evan Bush says his side needs to be wary of a motivated side looking to impress its new interim head coach. THE CANADIAN PRESS/AP, Tony Avelar

The surging Impact look to build on their stellar away record when they face struggling FC Cincinnati on Saturday, but Montreal goalkeeper Evan Bush says his side needs to be wary of a motivated side looking to impress its new interim head coach.

Cincinnati is on a five-game losing skid during which they have failed to score a single goal, but Bush warned that a new coach will provide new challenges for the Impact.

"You don't know what to expect," Bush said. "There's a lot of talk about the last coach in Cincinnati playing guys out of position or formations that maybe didn't suit the personnel that he had. You have to assume that will change coming into this game.

"Any time a team fires their coach, the players are motivated for the game. Maybe they didn't like the coach, maybe they feel a sense of urgency, maybe they feel threatened -- all those things combined will make for a very difficult game for us."

The Frenchman left Montreal to take an assistant coaching job with Cincinnati, leading the club to a first overall finish in the United Soccer League last year before its promotion to Major League Soccer.

"They will show a lot of new things, so we'll have to adapt quickly," said Impact coach Remi Garde. "But the players are the same, and we've studied them quite well. It won't be an easy game. Players sometimes get a boost when there's a coaching change. We're expecting a big challenge.

"It's always nice to see a country mate, especially so young, at that level. I'll wish him luck, but only after the game."

Montreal and Cincinnati are trending in opposite directions.

The Impact have won three of their last four games and are eyeing sole possession of first place in the Eastern Conference. Montreal is currently in a three-way tie with Philadelphia and D.C. United atop the East.

Montreal is coming off a mid-week 2-1 win against New York, the franchise's first win at Red Bull Arena. Striker Maxi Urruti capped off the come-from-behind victory with a 79th minute penalty shot -- his first goal of the season.

FC Cincinnati is tied for last place in the East and is winless in its last seven games while scoring an MLS-worst eight goals this year.

Cincinnati has not found the back of the net in 521 minutes -- the seventh-longest scoreless drought in MLS history. If they fail to score against Montreal, it would be the second-longest scoreless skid. The last Cincinnati goal from open play was on March 24 -- the fourth game of the season.

That all augurs well for an Impact side that has been defensively sound all year and consistently strong on the road this campaign.

Montreal has collected 14 points away from Saputo Stadium (4-3-2), one of the best away records in MLS. The Canadian team had 11 points on the road in all of last season.

The Impact have never won more than four road games in a single season since joining MLS in 2012.

"Something we analyzed after last year is why we were not doing so well on the road, why it was so complicated for us," said central defender Jukka Raitala. "Playing at home or away should not be such a big deal. It's looking very good. We're going into away games with high confidence."