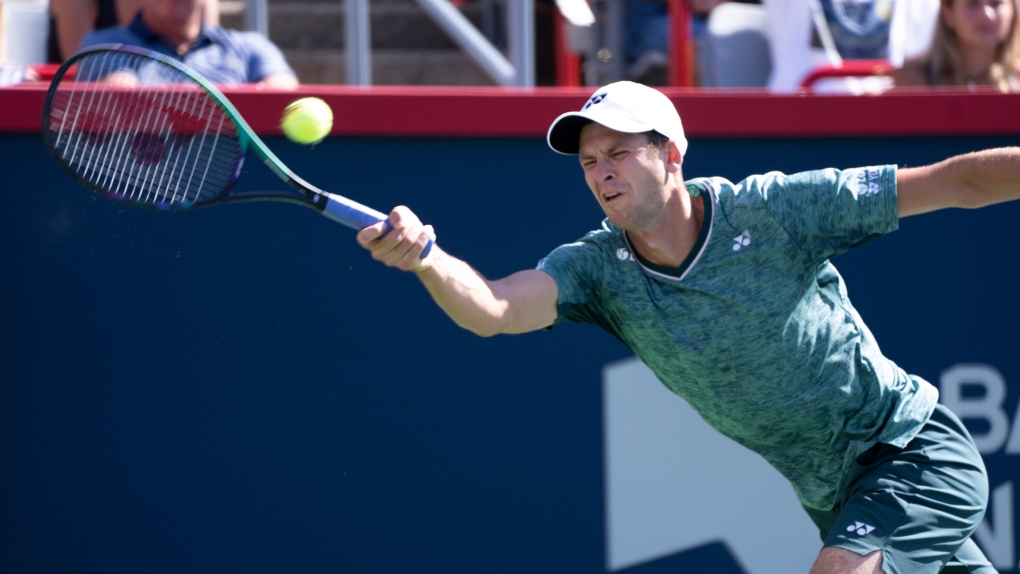 Casper Ruud let the opening game of the decisive set slip away Saturday at the National Bank Open. Hubert Hurkacz took advantage — sealing an important break when his return hit the net cord and trickled over — before rolling to victory.

Hurkacz secured a berth in the final with a 5-7, 6-3, 6-2 victory at IGA Stadium. He'll next play the winner of the evening semifinal between Spain's Pablo Carreno Busta and Britain's Daniel Evans.

The six-foot-five Hurkacz, a No. 8 seed from Poland, wanted to set the tone in the third set after pulling even in the match. However, Ruud jumped out to a 40-0 lead before errors started to creep into the Norwegian's game.

A flubbed overhead smash helped Hurkacz get back to deuce. On break point, the fortunate result at the net gave him a lead he wouldn't relinquish.

"That was a lucky shot in an important moment," Hurkacz said. "Sometimes it happens. But I was trying to be aggressive at that point so I was happy that paid off."

"Obviously I don't mind hitting that cord, but it's probably better to get a winner. That's OK," he added with a smile.

Hurkacz had an 18-8 edge in aces and completed the win in two hours two minutes.

"I think I found a good rhythm and I was making the right decisions," he said.

Hurkacz flashed his big serve — he had five aces in the opening game alone — but also kept Ruud guessing throughout the match. His serve-and-volley game was working well and he occasionally used an effective floating drop from the backcourt.

He came to the net frequently to put pressure on and it paid off with an early break. Hurkacz then held at love for a quick 3-0 lead.

The near-capacity crowd, eager to see a competitive match between the two seeded players left in the draw, did its best to cheer on Ruud. The Norwegian responded with four straight points to get on the board and followed with a break of his own.

He added another break at 5-5 — sealing the point with a cracking forehand winner — and took the first set in 42 minutes.

"I didn't expect to be in the 7-5, 1-0 position when I was 3-0 down in the first set," Ruud said. "But he (made) some sloppy mistakes, then he kind of erased those and played some beautiful winners and beautiful games."

Hurkacz, who has needed three sets in each of his singles victories, would go the distance again on a warm, sunny afternoon.

He started dictating the play more often in the third set and connecting on more winners. A sizzling two-handed cross-court backhand sealed another break for a 3-0 edge and he was on his way to a second career appearance in a Masters 1000 final.

Ruud, who dispatched Canada's Felix Auger-Aliassime in the quarterfinals, defeated Hurkacz in their lone previous meeting in the fourth round at Roland Garros earlier this year.

The evening semifinal between Carreno Busta, the world No. 23, and the 32nd-ranked Evans was their first career meeting. Neither player has appeared in a Masters 1000 final.

The final of the US$6.57-million ATP Tour event was scheduled for Sunday.

The last unseeded player to win this tournament was Argentina's Guillermo Canas in 2002 at Toronto. Reilly Opelka was unseeded when he reached last year's final but he lost to top-seeded Russian Daniil Medvedev.

In doubles play, the third-seeded duo of Neal Skupski of Britain and Wesley Koolhof of the Netherlands defeated the German pairing of Kevin Krawietz and Andrea Mies 3-6, 6-2, 10-8.

Hurkacz and Jan Zielinksi of Poland were scheduled to play Evans and Australia's John Peers in the late doubles semifinal.

This report by The Canadian Press was first published Aug. 13, 2022.

Here are some past Alberta premiers who resigned amid party strife: