On Sunday, 16-year-old Thomas Trudel was shot in St-Michel.

In February, 15-year-old Meriem Boundaoui was caught by a bullet in a drive-by shooting in St-Leonard and died.

Jannai Dopwell-Bailey, 16, was stabbed to death in Cote-des-Neiges in October.

Hundreds showed up to honour these teenagers and march to remember their lives and demand for solutions.

Supporters gathered at Parc Franncois-Perrault, near where Trudel was shot and killed just over a week ago.

Among them was 15-year-old Nazim, a former classmate of Trudel's, who said he'll be remembered for his kindness.

"The day after his death, something was wrong with François-Perreault. (...) It was not like before. It's like the school has lost its soul," said Nazim.

The memorial march comes the day after the funeral for Jannai Dopwell-Bailey, who was stabbed and killed outside of his school. Dopwell-Bailey's family criticized the "double standard" from politicians in Quebec, who publicly spoke and made gestures of support after Trudel's death, but not for the 16-year-old.

Premier Francois Legault laid flowers at a makeshift memorial for Trudel, and Mayor Valerie Plante held a news conference after his dealth along with Montreal police (SPVM) chief Sylvain Caron offering support to the family. Neither made a similar gesture after Dopwell-Bailey was killed.

MNA Chantal Rouleau, MP Pablo Rodriguez and provincial Liberal leader Dominique Anglade and other politicians attended the march on Saturday and some spoke about violence in the city and the need to address its root causes.

"They are all our children," said Rouleau, who called gun crime prevention a "community responsibility."

"It's so important to stay together, and fight together, against violence," she said.

The Forum Jeuness de Saint-Michel organized Saturday's event, which included speeches, a moment of silence and the opportunity to lay flowers in memorium. 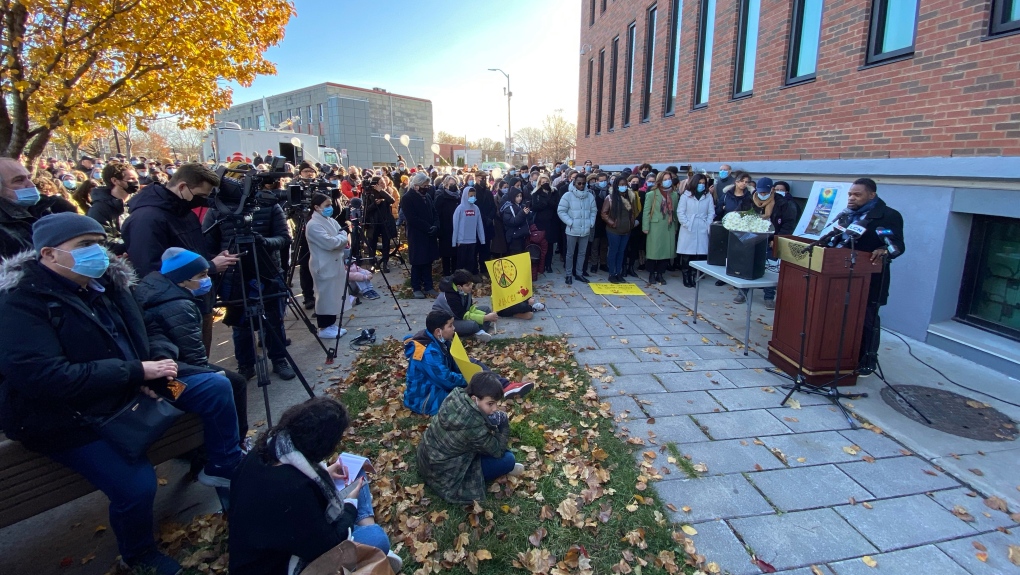 Hundreds were on Nov. 20, 2021 to honour the recent victims of violence that included two 16-year-old boys. (Ian Wood/CTV News)

'WE NEED TO PUT OUR MONEY WHERE OUR MOUTH IS': ANGLADE

"The federal (government) has a mandate at its borders, that's clear. They need to take action," said provincial opposition leader Anglade, adding that the province also needs to step up its efforts.

As for "the provincial (government), if you work with organizations on the ground, you realize they need help," she said. "Prevention is key. Where is the money?"

"At the end of the day, we need to put our money where our mouth is."

Honoré-Mercier MP Rodriguez echoed those concerns, saying "we all have to do more," and hailing the federal government's assault-style weapons ban.

"I'm not here as minister, I'm here as a human being, as a father," he said. "We have to stand up to violence."

-- This is a developing story that will be updated. This article was published with files from CTV News' Ian Wood and The Canadian Press.