KAHNAWAKE -- Hundreds travelled to the field next to the Kahnawake Sports Complex Wednesday to say goodbye to one of its most recognizable and significant leaders: Mohawk Council of Kahnawake Grand Chief Joe Tokwiro Norton.

Mohawk Nation at Kahanwake secretary Kenneth Deer is part of the traditional longhouse government in the community, but though they differed in their politics, Deer will remember Norton for his positive contributions to the community.

"He represented a steady influence on the political direction and economic and social direction of this community," said Deer. "You can't be chief of the Mohawk council for so many years and not have an impact on this community."

Norton was elected Council Grand Chief in 1982, and was thrust into the spotlight as a one of the main negotiators in 1990 during the Oka Crisis.

"Even young leaders, who were just children in 1990, still looked up to him today," said Assembly of First Nations Quebec-Labrador Regional Chief Ghislain Picard. 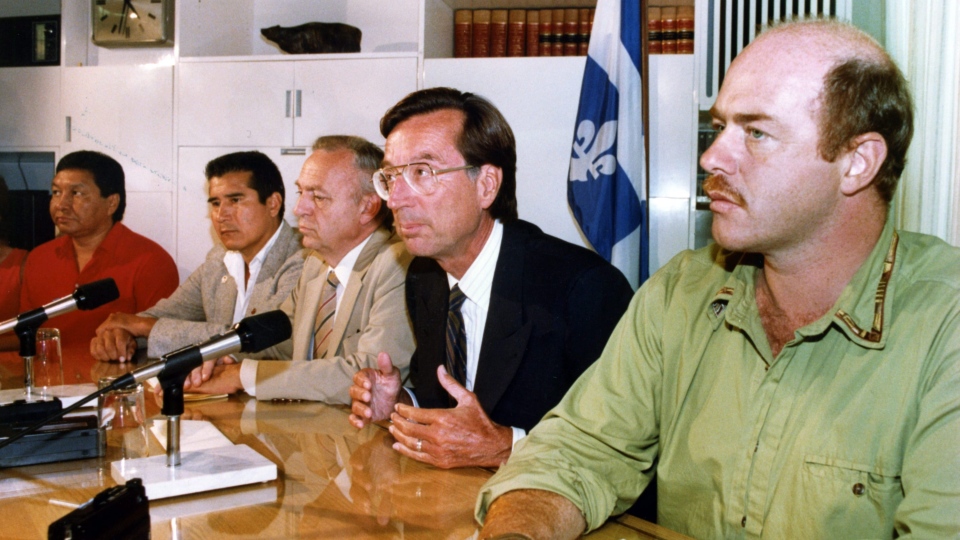 Norton retired from politics in 2004 and then returned in 2015 when he was once again elected Council Grand Chief. Busy to the end, he chaired the MCK meeting the Monday before he passed away.

He was awarded the National Aboriginal Achievement Award (now Indspire) in 2002 for public service.

Norton is remembered as both a leader that built his community into what it is today, but also as someone who was always trying to build bridges between Indigenous communities.

Recently, he was vocal in his support of the Wet'suwet'en Hereditary Chiefs in BC during their dispute over a natural gas pipeline.

Deer spoke of how Norton tried to reach across the community between the elected Mohawk Council and the traditional government.

"I think he tried to be a voice of reconciliation," said Deer. "And sometimes, he was successful, and sometimes he was not. We still have a long way to go."

"I thought he had a high regard for the sovereignty of the Mohawk Nation," said longhouse elder Joe Deom.

Norton negotiated with Quebec and Canada to establish the Kahnawake Peacekeepers, the community's police force, and he was instrumental in developing the community's gaming industry into a leader in the field.

"Joe stood up for all our rights, title and jurisdiction," said Assembly of First Nations (AFN) Chief Perry Bellegarde. "He not only helped the people Kahnawake, but Indigenous people all across Canada, all across Turtle Island (North America)."

Norton died on Friday at the age of 70. He leaves behind a large immediate and extended family.