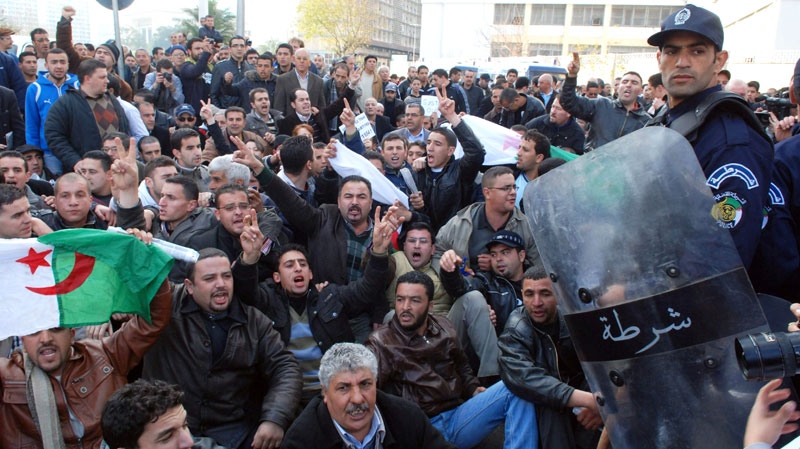 Algerian protesters holding an Algerian flag as they gather in front of Police officers during a demonstration in Algiers, Algeria, Saturday Feb. 12, 2011. (AP / Sidali Djarboub)

Hundreds of Algerian protesters were reportedly arrested on Saturday, as demonstrations demanding democratic reforms were held in spite of a government ban.

The head of an Algerian human rights group says 400 people had been arrested during protests in the capital Algiers, which followed in spirit those that toppled Egypt's authoritarian leader this week.

The Algerian government has attempted to temper protests by banning public demonstrations and blocking the streets of the capital.

Heavily armed police lined up along marching routes on Saturday and set up barricades outside the city to try to stop busloads of demonstrators from entering the city.

Thousands of people defied the ban despite the heavy security presence, taking to the streets to demand President Abdelaziz Bouteflika step down. Bouteflika has led the North African nation since 1999.

In Montreal, hundreds of supporters marched from from Carre St. Louis, which borders St. Denis St. to the east and is one block north of Sherbrooke St. E. to the Algerian consulate on St. Urbain St. and Sherbrooke.

Some observers suggest Algeria could be the next Arab country to be swept up in nationwide protests against its leader. Egyptian President Hosni Mubarak was forced to resign on Friday, while neighbouring Tunisia forced autocrat President Zine El Abidine Ben Ali into exile on Jan. 14.

Kamran Bokhari, regional director for Stratfor, a global intelligence agency, said the Arab world could see a domino effect after Tunisia and Egypt.

"To the extent that people are excited, people are energized and electrified, yes. We are already seeing people mass, not in large numbers, in Algeria, in Yemen. There are lots of places to watch," Bokhari told CTV News Channel on Saturday.

News reports from Algeria suggested that security forces outnumbered demonstrators. Daily newspaper La Liberte reported some 30,000 riot police have been deployed in Algiers, while some 10,000 demonstrators came to march.

Algeria has been under a state of emergency since 1992, when the cancellation of the country's first multiparty election led to an Islamist insurgency that resulted in the death of some 200,000 people.