How right-wing is the Coalition Avenir Quebec? 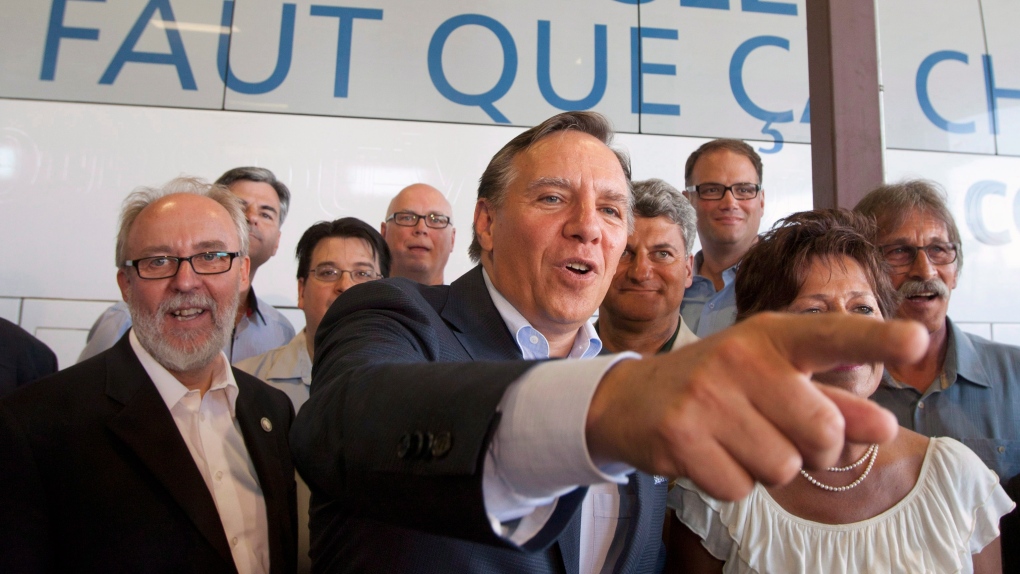 If economic conservatives are looking for the great right-wing hope in Quebec's election campaign, they may have to shift their gaze a little to the left.

The Coalition Avenir Quebec -- headed by millionaire businessman Francois Legault -- has billed itself the champion of small businesses and defender of the province's entrepreneurial spirit.

But in the party's platform, plans to slash taxes sit alongside a promise to prevent foreign takeovers. The benefits of risk-taking are vaunted, right next to a pledge that a CAQ government will play a bigger role in protecting business.

For an ostensibly fiscal-conservative party, its policies leave some economists wondering what it has against the free market.

After reading through the CAQ's platform, Laval University economist Stephen Gordon described it as "pork piled upon pork."

"But that's not the same thing as being market-based."

The CAQ has cast itself as the party of change in the Quebec election campaign. The early success in recruiting anti-corruption crusader Jacques Duchesneau has allowed it to steal the limelight from its more established counterparts.

But lost in the background are the party's economic proposals.

Some are indeed fiscally conservative. It would use 100 per cent of resource royalties to bring Quebec's debt down to the national average; eliminate 7,000 civil-service jobs; cut personal income taxes and fees by $1.8 billion over five years.

Although Quebec's jobless rate is now closer to the national average than it has been for decades, it still lags slightly behind the national norm.

Legault says he wants to revive the entrepreneurial spirit in Quebec.

"To succeed in business, what's important is the batting average... There will always be failures, but if we are too afraid of failure then we'll stop innovating in Quebec."

When Legault speaks of a "batting average," the bat-swinger he's talking about is the state. What he's arguing is that the state shouldn't fear picking winners and losers because, if it invests strategically, it will do more harm than good over time.

And the entrepreneurial spirit Legault speaks of would be supported by the province's public pension fund -- which, to a certain way of economic thinking, is a dangerous and counter-productive idea.

Such economists warn that pension funds fare worse when guided by politics. And they say that if you want to stifle innovation in an economy, an excellent way to go about doing that is to provide assurance to your businesses that you'll protect them from foreign competitors.

Legault plans to direct $5 billion from the Caisse de depot, the province's $160 billion pension manager, to a new natural-resources fund that would buy a stake of up to 49 per cent in extraction businesses.

He would also force the Caisse to invest in large Quebec businesses to help them repel foreign takeovers -- a timely promise, given the current U.S. bid for the Rona hardware chain.

On the eve of the campaign, Legault spoke out against the takeover by American rival Lowe's. More recently he tweeted his opposition to Bell's proposed merger with Astral Media (TSX:ACM.A) saying, "Another company headquarters leaves Quebec! That's enough, this has to change!"

That merger is bitterly opposed by other media including the Quebecor empire -- which also received a $3.2 billion investment from the Caisse in 2000 that helped it expand. It now owns not only the province's daily tabloids and biggest private TV network, but also the Videotron cable provider and the Sun media properties elsewhere in Canada.

Some of Legault's promises regarding the Caisse are the equivalent of nails on a chalkboard for his free-market critics.

"It makes me nervous when politicians look at this investment fund, saying 'Hey, here's a pile of cash, let's spend it,"' said Gordon.

"This is not a free-market platform. It's very much interventionist. Lots of public money is going to finance private endeavours."

The Parti Quebecois is also proposing to use Caisse money, $10 billion of it, to prevent foreign takeovers. Party leader Pauline Marois made that promise this week while standing in front of a Rona outlet. Even the Liberals say they will "encourage Quebec ownership," though their platform doesn't explain how this will be achieved.

One observer says the common ground held by the three parties is evidence of Quebec's particular political context.

One economist points out that Quebecers worry about the ownership of their companies to a degree uncommon in the rest of Canada.

"The CAQ certainly doesn't have a leftist program, but it is not a program of the right either, at least in the classic sense of the term."

So the difference between the CAQ and its rivals, especially the Liberals, may be one of degrees.

Both Legault and Premier Jean Charest have made debt repayment key in their respective platforms. But based on the details provided by the parties themselves, Coiteux estimates the CAQ is proposing debt payments at a rate eight times greater than the Liberals.

Both are also counting on untapped natural resources in Quebec's North to fund their debt payment. The CAQ, though, wants larger investments in resource companies than what the Liberals are proposing.

"I think that the most (conservative) party is the CAQ," said Harold Chorney, a political science professor at Concordia University whose research focuses on Keynesian economics.

"Not far behind... is the Liberal Party of Quebec."

But Chorney also admits that conservatives in the U.S., or the rest of Canada, would have trouble recognizing themselves in the policies that the CAQ has put on the table.

Perhaps Legault could really let loose with free-market economics if he were running elsewhere, Chorney said.

"If Legault were running in Alberta, he'd be more popular."