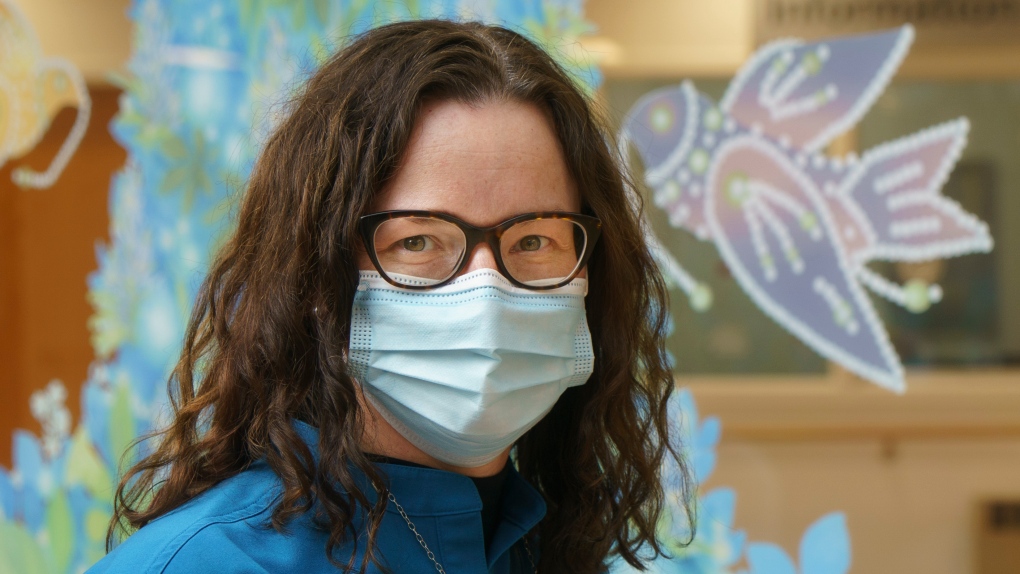 KAHNAWAKE -- The Kanien'kehá:ka (Mohawk) community of Kahnawake is being described as a miracle and a statistical anomaly when it comes to fighting the spread of COVID-19.

While Quebec in general, and the greater Montreal area in particular, are hard hit, the Mohawk community has no deaths or hospitalizations resulting from the novel coronavirus. Part of that success has been attributed to the expertise of family doctor and virologist Annick Gauthier.

During spring break in 2020, when COVID-19 first began to appear in the province, Gauthier was on a trip to New York, where she was going to meet former colleagues from Rockefeller University. She'd worked with them previously to discover a treatment for hepatitis C. Dr. Charles Rice was awarded the Nobel Prize in medicine last October for his work on the project.

"I have a very small part of the Nobel Prize in me!" said Gauthier.

It wasn't that award that fueled the discussions during the reunion between researchers, though. Rather, it was the recent outbreak of a new virus called SARS-CoV-2, a new coronavirus that causes a disease that would later be called COVID-19.

"There were no cases in New York at that time, but when we left New York, the first case happened. When I got home, I knew everything was going to change," said Gauthier, who studied medicine at McGill after graduating in biochemistry and molecular biology from the University of British Columbia and working for several years in the pharmaceutical industry.

She immediately began to write a document explaining "Virology 101" to doctors nationwide. Instead of going through the traditional channels of scientific journals, she published her document on a Facebook group that brings together thousands of doctors. She explained basic concepts to guard against the virus and prevent it from spreading.

In that same first week, when the virus had also just been spotted in Quebec, Gauthier participated in a team meeting with doctors from the Kateri Memorial Hospital Centre in Kahnawake.

"Right away, I realized they needed help," she said. "It's not that I'm fantastic, it's just that I have a good background for this horrible moment."

Her information was welcomed by Kahnawake's COVID-19 Task Force.

Gauthier has put her research on congenital diseases on hold to focus on protecting the Kanien'kehá:ka community of some 10,000 people against the coronavirus.

As public health guidelines and other information on the virus were made public, Gauthier played the role of filtering and spreading information -- only messages she deems relevant to the community.

"I was able to say what makes sense and what doesn't. I was digging through the literature, communicating with colleagues in other countries to bring back all the information and create protocols that worked," said Gauthier, who became a local celebrity through her online videos and radio appearances.

Although her name suggests that she is French-speaking, Gauthier is English-speaking, but she speaks French very well. Her bilingualism enabled her to translate several Quebec government documents into English and relay them to the predominantly English-speaking community of Kahnawake.

The first line of defence deployed by the Kahnawake COVID-19 Task Force was to mobilizing on three fronts: staff movement, symptom self-assessment and communication with local residents.

The main decision Gauthier retained at the very beginning of the pandemic in the winter of 2020, was to stop health-care personnel moving from one establishment to another.

"I think that's the secret of the success of the first wave in Kahnawake," she said. "I didn't know people needed to work in two places to make a living."

Gauthier immediately saw the potential for catastrophic contagion if nurses or orderlies moved from one setting to another, especially as outbreaks began to surface elsewhere on the South Shore and in Montreal.

Kateri Hospital executive director Lisa Westaway convinced employees of the need to put an end to working in multiple locations. Only doctors could continue to see patients outside the community, but were required to respect much more severe protocols than those imposed at that time by the Quebec health system.

"For example, a doctor could not work in a CHSLD (long-term care home), go to their clinic and return to a CHSLD. They had to follow a one-way road from a green zone to a red zone and never backwards," said Westaway.

Gauthier also created another strict measure: a symptom self-assessment questionnaire, mandatory for anyone entering the Kateri Memorial Hospital. The questionnaire was deployed throughout businesses in the community, then in schools at the start of the September school year.

With the aim of always acting quickly, Kahnawake worked hard to obtain its own testing centre as early as April. Tests have since been carried out daily, although sometimes there were only a handful of samples to analyze.

On the third front, members of the task force posted live videos on social media every day.

Gauthier also published educational videos on all aspects of the virus and on prevention methods based on the most recent scientific publications available.

In order to minimize the risks of the virus spreading in the community of Kahnawake, Gauthier has written good practice protocols for businesses, restaurants, schools, school buses, gyms, etc.

"These protocols must be followed and to ensure this, we have trained public health inspectors among the staff of the Mohawk Council," she said.