New restrictions are now in place in Quebec to curb the spread of COVID-19 including a curfew that goes from 10 p.m. to 5 a.m.

The tough health restrictions imposed Thursday by the Quebec government to curb the outbreak of the Omicron variant of COVID-19 are now in effect.

An emergency alert was sent to Quebecers cell phones and TVs Friday evening regarding the curfew. 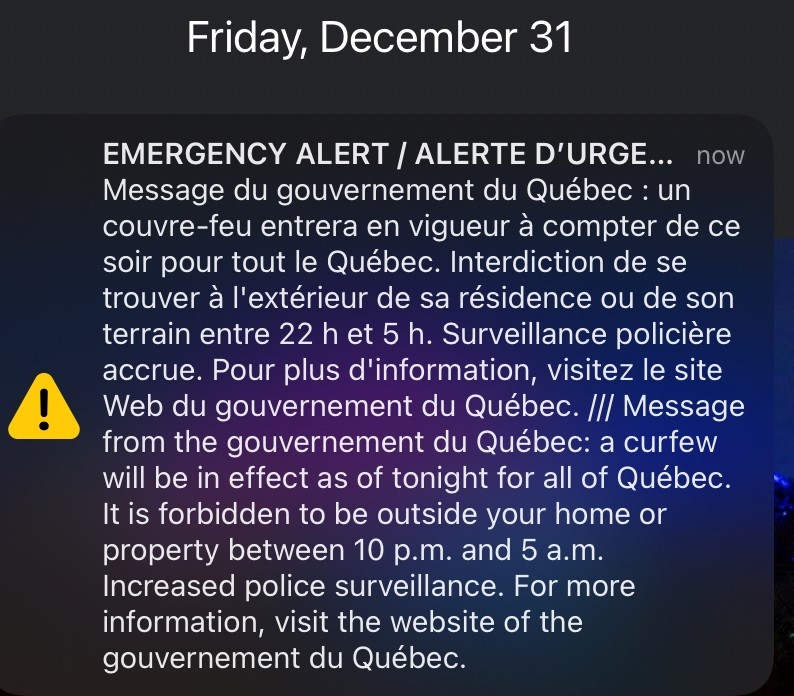 Emergency alert for the curfew.

Some opposition MNAs were unimpressed with the use of the alert.

"Yeah, we know," wrote Liberal MNA Gregory Kelley on Twitter. "Thanks for the reminder after being reminded all day."

Yeah, we know. Thanks for the reminder after being reminded all day. pic.twitter.com/WJRYFcAIzC

"The panicky Amber Alert from the government on our telephones and televisions, to remind us of a curfew that we already know, is disrespectful to Quebecers," wrote PQ leader Paul St-Pierre Plamondon. "No need to add to the widespread angst with an alarm intended for kidnappings."

In addition to not being allowed to roam the streets at night, restaurant dining rooms in the province will be closed and indoor sports and gatherings in homes will be prohibited, except for single people who can join another family bubble.

The curfew will be in effect for an indefinite period of time, from 10 p.m. to 5 a.m. the next day.

The following are exceptions to the rule:

The current list does not include those needing to walk their dogs after curfew, as it did during the curfew imposed in early 2021.

"We will check the situation tonight," said SPVM spokesperson Veronique Comtois, adding that officers are ready if any protests should form in response to the curfew order.

Comtois could not say how the force would enforce the rule, as the SPVM has not received the written decree yet.

"When the decree is transmitted to the SPVM, it will be analyzed by the legal affairs department in order to specify the scope of police powers in relation to these new provisions," an SPVM news release reads. "The SPVM wishes to emphasize that a preventive and adapted approach will be favoured for people in vulnerable situations, given the limits associated with legal action in certain circumstances."

Elementary and secondary schools, colleges and universities will remain closed until at least Jan. 17; school daycare services will be open only to the children of workers providing essential services. Places of worship will only hold funerals, with a maximum of 25 participants.

Non-essential commercial establishments will be closed on Sundays, Jan. 2, 9 and 16.