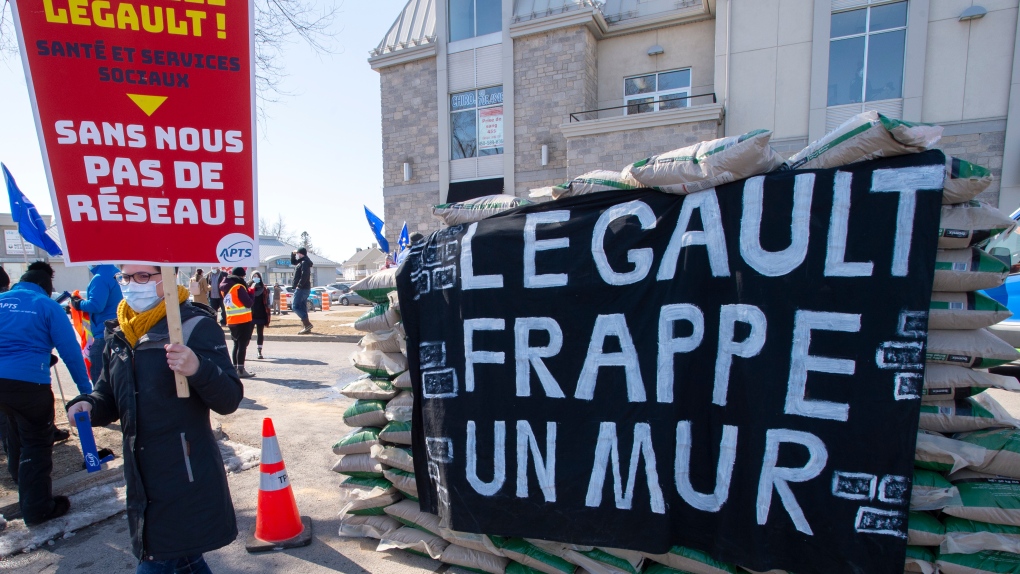 L'ASSOMPTION, QUE. -- The APTS labour organization erected a veritable wall of sandbags in front of Premier Francois Legault's constituency office on Wednesday at noon in L'Assomption, Quebec, east of Montreal.

The health-care technicians and professionals union wanted to illustrate the "wall" that separates it from the government's offers to renew the collective agreements.

The APTS represents 60,000 workers, mainly women, in health and social services. They include about a hundred job titles: social workers, psychologists, laboratory technicians, medical imaging technicians and others, who work in health institutions and youth centres.

Negotiations on collective agreements with the Quebec government have been ongoing for more than a year now, and discussions are not making much progress, according to the APTS.

Workload is one of the main issues in dispute.

APTS vice-president Veronic Lapalme spoke of "working conditions that have become unbearable in the health and social services network."

In youth centres, for example, its members are leaving for the private sector, where working conditions are better and waiting lists are shorter.

On March 29, the APTS will consult its 60,000 members at general meetings on a 10-day strike mandate to be exercised at the appropriate time.

"We are not willingly considering going on strike, reducing the number of tests performed daily, the volume of tests processed in the labs or the support offered to our users, but we have to in order to ensure the quality of these services in the long term," said Lapalme. "We are now up against the wall."

The Quebec government has already reached an agreement in principle on working conditions with the nurses of the FIQ (Fédération interprofessionnelle de la santé).

On the issue of wages, however, the FIQ-APTS union has not yet reached an agreement.