Cote St. Luc is demanding the federal government step in to help protect one of the city's major green spaces -- and it wants other communities in the Montreal area to follow suit.

On Monday, Cote St. Luc's municipal council adopted a unanimous resolution calling for the lands north of the Pierre Elliot Trudeau airport to be turned into a national urban park.

According to David Fletcher, vice-president of the conservation group Green Coalition, it's a rich ecosystem that's home to a plethora of plants and animals.

"If it's left alone -- or better yet, if it's helped along -- this will become even better," he told CTV News on Saturday. "It's a site with enormous potential."

The 215-hectare space is owned by the Canadian government, but is leased to Aeroports de Montreal (ADM).

To protect this ecosystem, Cote St. Luc Mayor Mitchell Brownstein wants Ottawa to use its jurisdiction over the land to "halt all and any development" there.

He said the council is asking other mayors to make the same request.

"We're pushing for all mayors from across the island of Montreal to pass similar resolutions so that the government of Canada will act and preserve this space," he said.

Fletcher said a collaborative effort is the only way to achieve this.

"We need all of the players, the political players on Montreal island, to be doing the equivalent."

The news comes a few weeks after a field of shrubs, flowers and milkweed plants on the site was mowed, prompting outrage from conservationists.

Speaking to CTV News earlier this month, the conservation group Technoparc Oiseaux referred to the area as "Monarch fields," claiming it was home to Monarch butterflies as well as various species of birds, snakes, mice, shrews, and insects. 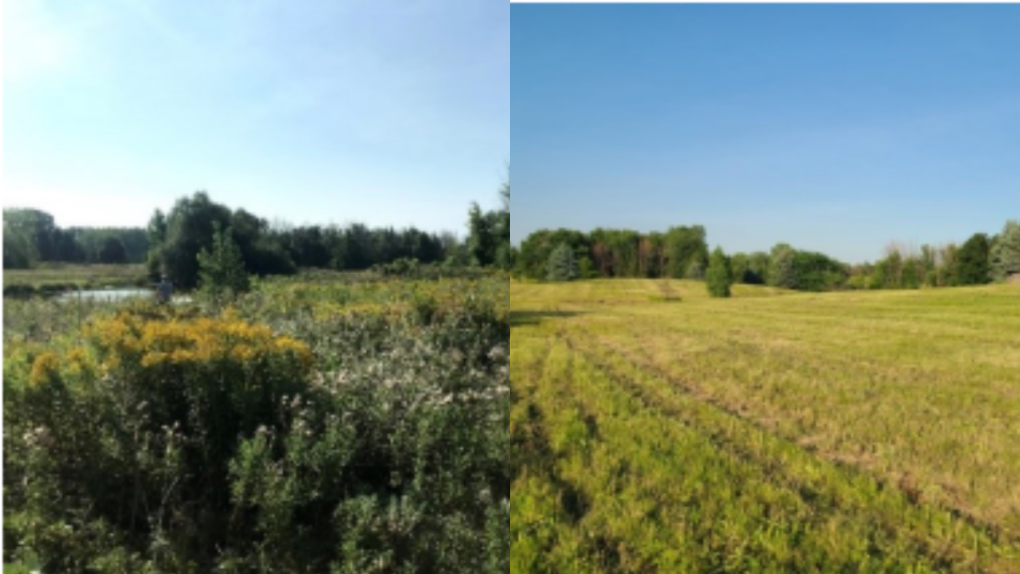 Before and after photos of the Monarch Fields in the Dorval Technoparc where a conservation group says thousands of milkweed plants were cut during nesting season. SOURCE: Technoparc Oiseaux

The Cote St. Luc council cited the mowing of these fields in its appeal to the federal government.

"Unfortunately, in the last weeks, the ADM mowed the butterfly fields and damaged 19 hectares of habitat which is equivalent to 2 M square feet or 35 football fields," reads a press release from the city. "This further added to the threats of fragmentation and destruction of the whole 215-hectare ecosystem."

ADM did not respond to a request for comment Saturday. However, in a statement sent to CTV News in early July, ADM said the patch does not have the attributes of a "critical habitat."

"No sensitive species, sensitive habitat or protected areas are present in this area," the statement reads.

ADM said the lands were mowed as part of "maintenance operations," adding that there's a "low presence of milkweed" in that particular area -- milkweed being the sole food source for Monarch caterpillars and the place where butterflies lay their eggs.

While the ADM denied the ecological significance of this particular patch of land, they acknowledged the value of lands beyond it, pointing to its establishment of the Des Sources Ecological Park in 2021.

"ADM Aéroports de Montréal is the only airport authority in Canada to have created an ecological park in order to better preserve its environments," the statement continued.

QUEBEC TO HAVE NATIONAL URBAN PARK BY 2030

Advocates nevertheless want more preservation efforts from higher up -- and Brownstein believes the establishment of a federally-protected park is the best approach.

"The federal land north of the airport at the Technoparc and Golf Dorval— including the Monarch butterfly fields— are a good location for such an urban park," he said.

In 2021, Ottawa invested $130 million into a program aimed at creating a network of national urban parks across Canada.

The goal is to establish a national urban park in every province and territory by 2030.

With files from CTV's Daniel Rowe.

'I don't see this getting better': Gas prices in Ontario expected to keep climbing

Drivers should fill up their tanks Tuesday as gas prices in Ontario are forecast to rise in the next few days, with one industry analyst warning that more hikes could be coming.