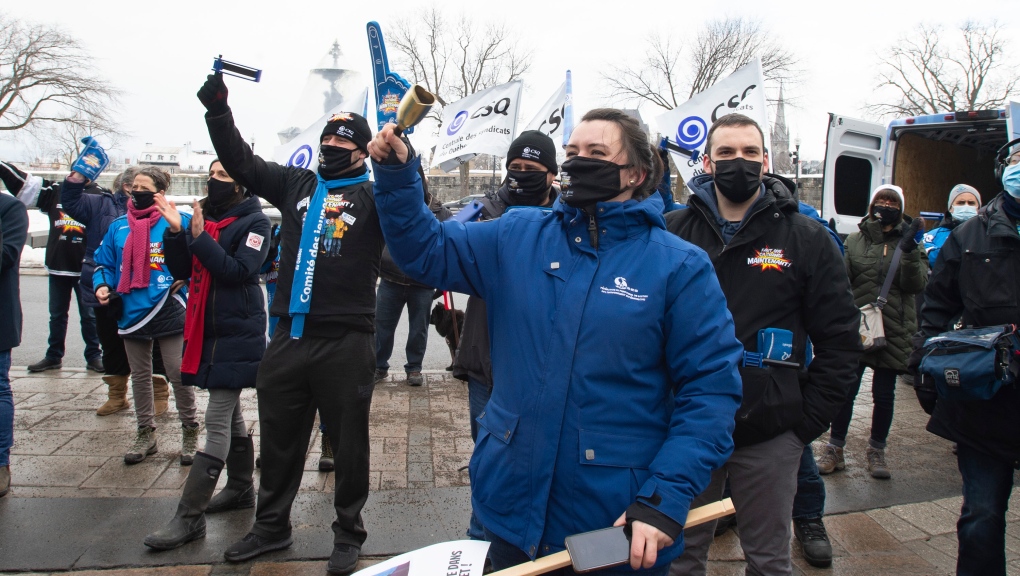 CSQ Teachers' union members protest at a demonstration, Thursday, March 18, 2021 at the legislature in Quebec City. THE CANADIAN PRESS/Jacques Boissinot

MONTREAL -- Nearly half of education unions have voted on the tentative agreement with Quebec City, and so far the deal is receiving very strong support from teachers.

By Thursday morning, four of the federation's nine unions had voted on the tentative agreement to renew their collective agreement.

The agreement had been reached with the treasury board in mid-April after intense negotiations, and the proportion of support for the tentative agreement varies, according to the union, from 87 per cent to 95 per cent.

The agreement addresses both teachers' working conditions, such as professional autonomy and workload, and salaries.

The other FAE unions are expected to vote on the tentative agreement this week.

The FAE had also begun consulting its members on a mandate for an unlimited general strike to be called on May 31.

The other union organization representing elementary and secondary school teachers, the Fédération des syndicats de l'enseignement (FSE), affiliated with the Centrale des syndicats du Québec (CSQ), has reached what it calls a 'settlement proposal'. It does not use the term 'agreement in principle', as this proposal does not address all of its demands.

Nevertheless, the FSE will also consult with its members on this issue, but without making a recommendation.

President Josee Scalabrini feels that gains have been made on entry to the profession, compensation and professional autonomy for teachers, but less so on workload, which is an important issue for the FSE.

The FSE is negotiating for 73,000 teachers, working in French school service centres and English school boards.