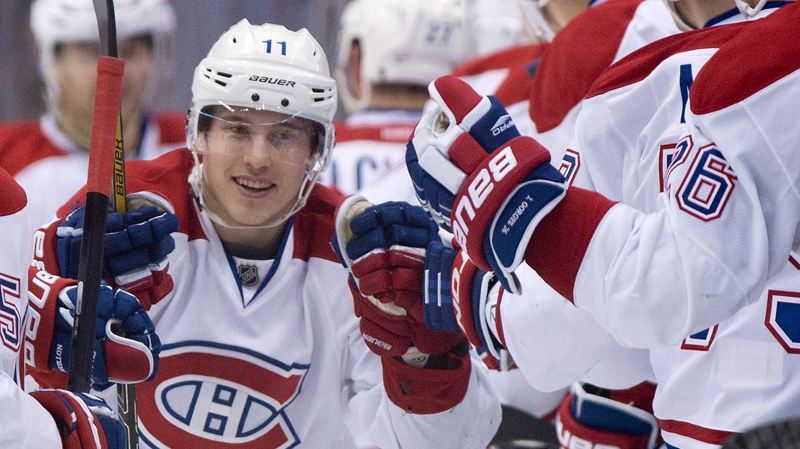 The Montreal Canadiens scored four straight goals in Toronto Saturday, to snag a 4-1 victory over a listless Maple Leafs team.

After going into the first intermission tied 1-1, the Canadiens took full control of the game in the second period, scoring a pair and outshooting the Leafs 11-1 in the period, in spite of having to kill off three penalties.

Leafs' goaltender James Reimer was pulled in favour of backup Ben Scirvens after Tomas Plekanec scored the Habs' fourth goal, his 14th of the season, at 2:25 of the third period on assists from Brandon Prust and Josh Gorges.

Gallagher had given the Habs a 3-1 lead with his 15th of the season at 9:18 of the second period. The diminutive rookie chased down a puck that Mats Eller had dumped into the Toronto zone, swooped up the errant puck after outskating Leafs defenceman Carl Gunnarsson and popped a shot past Leafs' goaltender James Reimer. Andrei Markov and Lars Eller  - who was credited with points on all three goals to that point - got assists on the goal.

Andrei Markov gave the Habs the 2-1 lead with his 10th of the season at 4:19 of the second, exacting a bit of sweet revenge afer he suffered some rough bodychecks and a retaliation penalty in the first period.

Markov's wrist shot, taken quickly off the draw, floated over Reimer's right shoulder into the net.

Eller, who got the sole assist on the play, also aided by leaping high to allow the puck fly between his legs, making it impossible for Reimer to see the puck.

Eller also scored the tying goal at 18:01 of the first period, his eighth, to give the Canadiens a 1-1 tie.

The Leafs were frustrated on three powerplays in the second period, failing to register a single shot in spite of those man advantages.

Eller's goal was one of several great moments for the young players on the team, as he showed great patience, waiting for Toronto goaltender James Reimer to shift over as he gently slid the puck along the ice into the open side.

Three Montreal rookies helped set up the play, which began when Jarred Tinordi caused a turnover by hammering Leafs' forward Mikhail Grabovski. The referee lifted his hand to call a retaliation penalty as Alex Galchenyuk fed Brendan Gallagher, who skilfully flipped a saucer pass to Eller who netted the goal.

Galchenyuk and Gallagher drew to within a point of the rookie point leaders on the goal, as they were both credited with assists on the play. Galchenyuk ended the season with 27 points, one behind rookies Jonathan Huberdeau, Nail Yakupov and Cory Conacher, all tied at 28 points.

Gallagher's second period goal put him into a tie four-way tie with the rookie point leaders.

Phil Kessel opened the scoring at 15:36 with his 20th of the season on a powerplay goal, shot along the ice from the circle. His shot slid through the skates of Raphael Diaz and then Peter Budaj who had no view of the oncoming puck through the forest of bodies.

The Leafs drew the powerplay when Andrei Markov was called for roughing after he swiped at fellow Russian Leo Komarov in retaliation for bumping into him behind the play. Earlier in the period the Habs successfully killed a powerplay after P.K. Subban was penalized for shooting a puck over the glass.

Subban, who lead all skaters with 24:57 of ice time, failed to register a point in the game and finished the regular season with an impressive 38 points in 42 games, tied with Kris Letang for the lead in points for a defenceman.

The Canadiens, who went without a shot until well into the first period, ended up outshooting the Leafs 9-6 in the first frame, and 23-17 overall as Peter Budaj was rarely tested until a late Toronto burst when the game was already out of reach.

In spite of losing, the Maple Leafs ended up winning the five-game season against the Canadiens series three games to two. Only one of those games was close, however.

In spite of the loss, the Leafs, who finish the abbreviated season with a record of 26-17-5 will not be knocked out of fifth place, as the Ottawa Senators were beaten 3-1 by Philadelphia.

Tne Canadiens finished the season with a record of 29-14-5 and will have home ice advantage in the first round of the playoffs against either Toronto or Ottawa.

The Habs' opponent will be determined Sunday by the result of the Boston-Ottawa game. If Ottawa beats Boston, Montreal will face the Senators. If Boston beats Ottawa, Montreal will play Toronto.

Click here to see more photos from the tilt.