MONTREAL -- The Montreal Canadiens are coming in with an assist for a Winnipeg Jets fan who says he was beaten up and robbed of his jersey while walking home from Game 4 at the Bell Centre Monday night.

Alex Wojakowski told CTV News a group of men harassed him for wearing a Jets jersey in downtown Montreal around 11:30 p.m. and then punched him repeatedly before fleeing on foot with his jersey.

Montreal police confirmed they received a 911 call about the incident and are reviewing video surveillance footage from the scene as the investigation continues. No arrests have been made.

In an email to CTV, the team said owner Geoff Molson was "concerned" about the event and wanted to do something to help him out. Molson spoke to Wojakowski Thursday morning and has offered to send him a new Jets jersey and a Candiens cap as a gesture of support.

Wojakowski, 23, called it a "very classy move" on the part of Molson and the team.

"It was pretty wild," he said in an interview Thursday. "It's very nice to see that, you know, people who are owners of sports teams, they really do care about people that come and watch the games if they're a fan of their team or not. 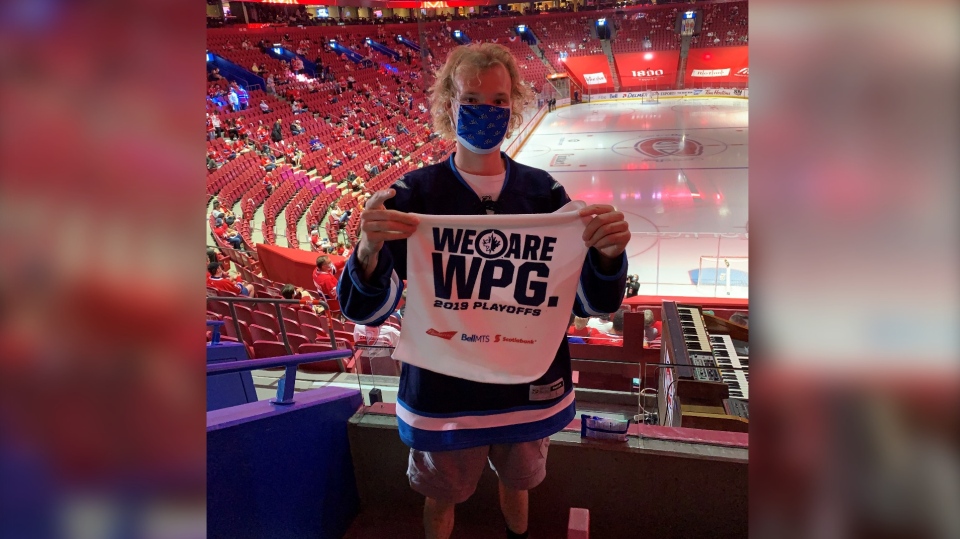 Reactions from people on Facebook range from "That is horrible! I’m ashamed that people in Montreal would do this" to "Sadly that doesn’t surprise me."

Wojakowski, said he is overwhelmed by the offers of support not just from the team but from random members of the public who have offered to help. Several people have emailed CTV after reading about what happened to him and have offered to buy him a new jersey.

"That's very, very kind and I really appreciate that but I don't want to accept your hard-earned money or whatever to contribute to getting a new jersey," he said.

"It's very, very nice but to the people who have offered me a jersey I just want you guys to know that I really appreciate it but that's your jersey and I don't want to take your jersey from you."

In another development on Thursday, it appears the stolen jersey was spotted in the early morning hours after the game dangling from a trash can.

Another development: @waynefrommtl tells me he found a torn Jets jersey dangling from a trash can near St. Catherine/Stanley around 1:15 a.m. Tues. He took a pic as a joke and realizes now it's very likely Alex's stolen jersey. Says he's "really disappointed" about the attack. pic.twitter.com/km02N6Nx0V

Wayne Vernet told CTV he was walking with his friends late into the night after the game and stumbled upon a ripped and "probably burned" Jets jersey in the trash near the intersection of St. Catherine and Stanley around 1:15 a.m. Tuesday.

He held up the jersey and took a photo of it as a joke, not knowing how it got there.

"I was just showing this is what's left of the jersey, basically," he told CTV. "I'm disappointed to how some of our fans reacted, but I've experienced this. Once I went to a game in Ottawa for a playoff game and I got kicked in the leg, pushed in the back with my friends and somebody spilled beer over us."

He sympathizes with Wojakowski and wished he was there to help him Monday night.

"If I was there, I would have stopped that for sure," he said

"I would have tried to prevent him from getting his jersey ripped and torn and burned."