Habs lose wild one to Devils in overtime 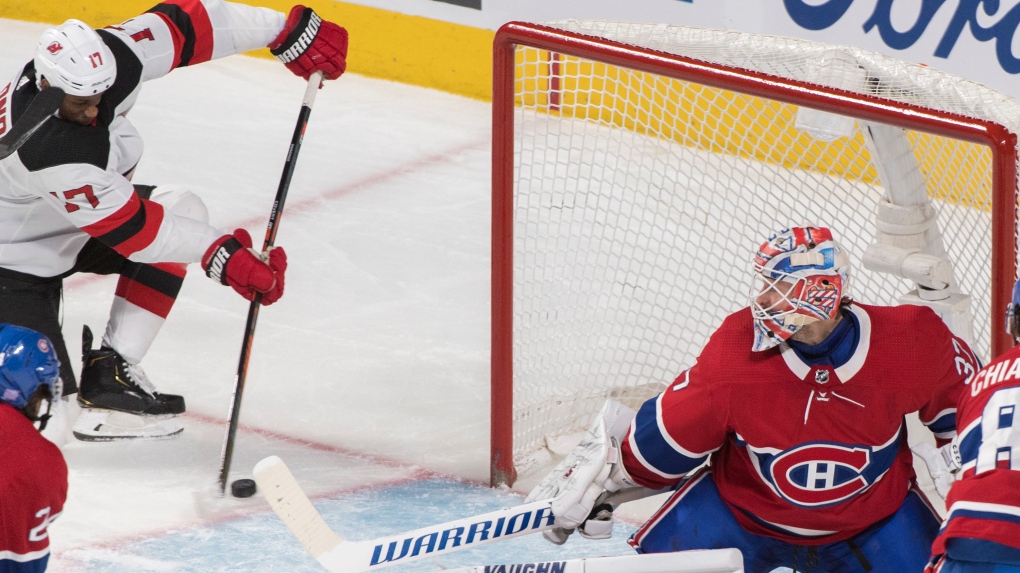 Kyle Palmieri scored in overtime as the New Jersey Devils completed the comeback to defeat the Montreal Canadiens 4-3 on Saturday night.

Nikita Gusev, Nico Hischier and Wayne Simmonds scored in regulation time for the Devils (7-8-4), who were down 3-1 late in the second. Mackenzie Blackwood, playing his second game in as many nights, stopped 31-of-34 shots.

Brendan Gallagher, Cale Fleury and Nick Suzuki scored for the Canadiens (11-5-4), who ended a three-game win streak. Backup Keith Kinkaid made 39 saves against his former club.

Both teams were playing the second of back-to-back games. New Jersey beat Pittsburgh 2-1 on Friday while Montreal won 5-2 in Washington.

It looked like Phillip Danault gave the Canadiens a 4-3 lead with 47 seconds left in the third period but the referees deemed the Montreal winger had kicked the puck into the net.

Instead, Palmieri scored the overtime winner on the power play at 1:30 of the extra frame on a one-timer from Taylor Hall, with Danault in the penalty box.

The visitors started their comeback with two seconds left in the middle frame when Hischier beat Kinkaid short-handed on a 2-on-1 rush. Kinkaid stopped Hischier on a breakaway less than 30 seconds earlier.

The Canadiens took five penalties in the third period and the lack of discipline finally cost them when Simmonds tied the game at 3-3 with 4:48 on the clock. Domi was in the box for interference and unsportsmanlike conduct.

The Devils have beaten the Canadiens in six straight contests.

The feisty Gallagher found space in the slot and got his stick on Jeff Petry's shot for his ninth of the season to open the score at 18:41 of the first.

Late-period goals have plagued Montreal all season and Saturday was no exception.

Kinkaid made 19 straight stops to start the first period but the 20th shot went in. Gusev was left alone in the crease and scored with 19 seconds on the clock to tie the game at 1-1.

Montreal took a 2-1 lead when Fleury scored his first NHL goal at 7:43 of the second. The rookie defenceman skated in from the blue line, avoided Pavel Zacha's slide and beat Blackwood on the backhand.

Cale added to his memorable night with back-to-back blocked shots on Hall midway through the second.

Suzuki put the Canadiens up 3-1 with a 5-on-3 power-play goal, a tap-in from the side of the net at 18:42 on Max Domi's rebound. New Jersey has the league's worst penalty kill on the road this season.

P.K. Subban was playing his sixth game against his former team and Bell Centre fans booed him every time he touched the puck.

Claude Julien shuffled his lines with the injuries to Jonathan Drouin and Paul Byron. Jesperi Kotkaniemi (recovered from groin injury) and Charles Hudon (recalled from AHL) were back in the lineup.