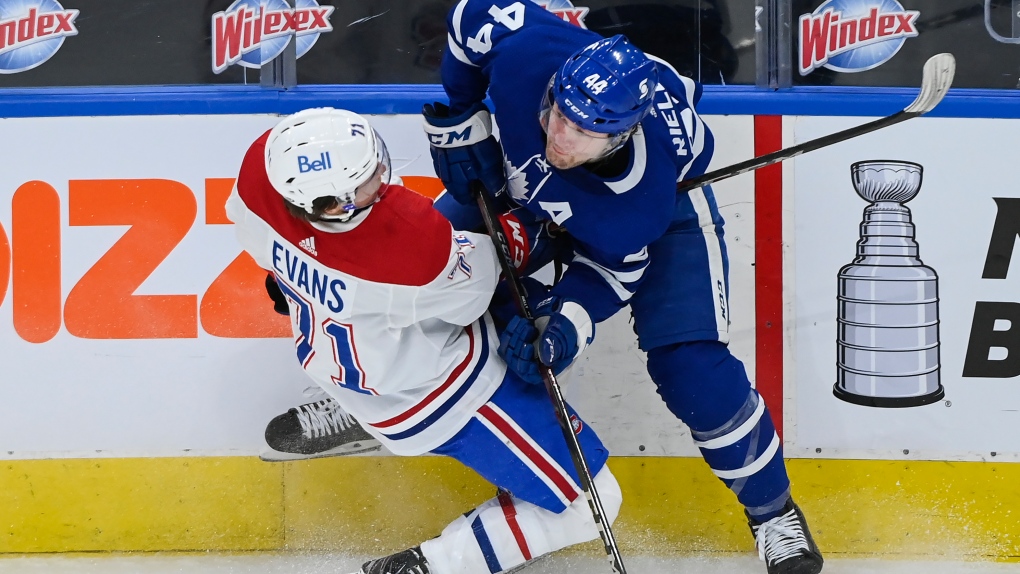 TORONTO -- Mitch Marner scored his 20th goal of the season as the Toronto Maple Leafs defeated the Montreal Canadiens 3-2 on Saturday night to clinch first place in the North Division.

The Leafs finished NHL's 56-game pandemic campaign 7-2-1 against the Canadiens as the Original Six rivals look poised to meet in the playoffs for the first time since 1979.

Toronto secured a division crown for the first time since 2000 -- just its fourth in the last 83 years.

Nick Suzuki and Brett Kulak replied for Montreal (24-21-9), which got 23 stops from Jake Allen.

The Canadiens, who had a chance to clinch the North's fourth and final playoff spot Saturday, host the Edmonton Oilers on Monday and Wednesday to close out their regular-season schedule. The Leafs, meanwhile, visit the Ottawa Senators on Wednesday and the Winnipeg Jets two nights later.

Leafs sniper Auston Matthews, who leads the NHL with 40 goals and looks sure to claim his first Maurice (Rocket) Richard Trophy, failed to find the back of the net for the first time in six games, but won the faceoff that directly led to Marner's go-ahead effort late in the second period. The 23-year-old Matthews' personal five-game goal streak against Montreal also came to an end.

Down 2-0 following Suzuki's 13th goal of the season early in the second period on a shot Campbell will want back, the Leafs got on the board when Engvall wheeled out from behind Allen's net before firing home his sixth -- and second in as many games -- at 5:02.

After Campbell made a good stop on Josh Anderson from the slot on a Montreal power play, Toronto equalized at 13:36 when John Tavares redirected Jake Muzzin's pass in the slot right to Nylander, who swept home his 17th to extend his point streak to seven contests.

The Leafs pushed ahead with 3:27 left in the period when Matthews beat Suzuki clean on an offensive zone draw, allowing Marner to wire his 20th in off the Allen's crossbar in a blink of an eye. The 24-year-old winger now has three 20-goal seasons since making his NHL debut in 2016, and was one shy of the mark before the 2019-20 campaign was halted by COVID-19.

Allen made a nice pad stop on Matthews from the slot eight minutes into the third to keep Montreal within one. Campbell, who improved to 17-2-2, followed that up a few minutes later with a nice stop on 28-goal man Tyler Toffoli as the Leafs held on.

On the heels of falling behind 4-0 in the first period of Thursday's 5-2 loss in Toronto, the Canadiens had a much better start and opened the scoring 3:34 into Saturday on Kulak's second. The defenceman's double-clutched point shot glanced off Muzzin in front and past Campbell as the Canadiens grabbed a 1-0 lead for the first time in their last seven games.

The Leafs' best chance of the period came off the stick of Marner, who forced a good pad save out of Allen from the slot.

Montreal made it 2-0 just 31 seconds into the second when Suzuki moved in on a 2-on-1 and fired a shot that went in off the inside of Campbell's blocker and dribbled over the line before Toronto exploded with three straight.

Notes: Leafs No. 1 goalie Frederik Andersen stopped 34-of-38 shots in the Toronto Marlies' 5-4 shootout loss to the Manitoba Moose in American Hockey League action Saturday afternoon in his first full game since March 19 because of an injury he previously described as "something around my knee." ... Canadiens forward Alex Belzile, 29, made his regular-season NHL debut after playing six times for Montreal inside last summer's expanded playoff format.

This report by The Canadian Press was first published May 8, 2021.