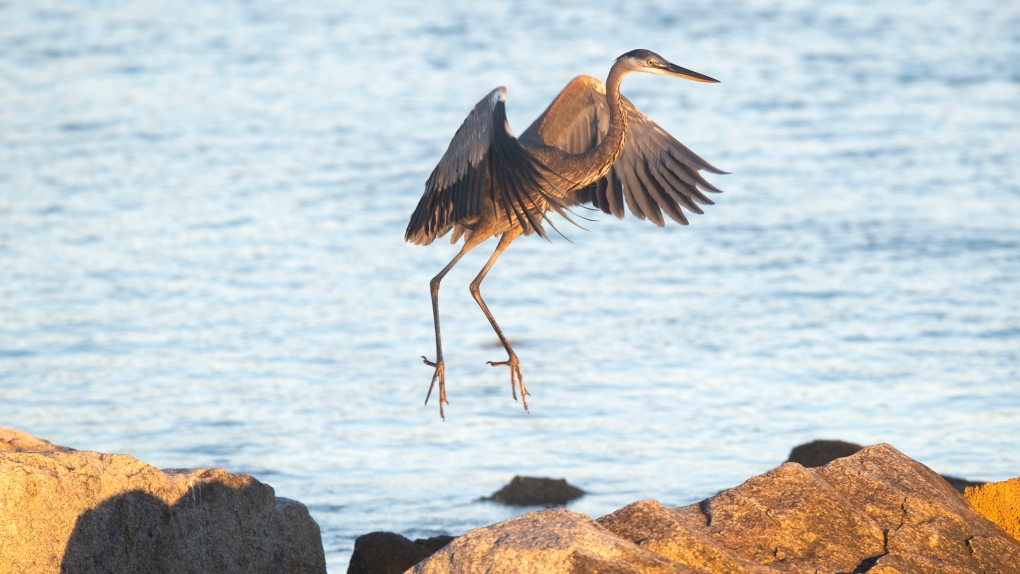 A great blue heron forages for fish on Monday, Aug. 31, 2020, at Sebastian Inlet State Park on the Indian River and Brevard county line. A Montreal bird preservation group is concerned REM construction will negatively affect species such as this heron if measures aren't taken. (Leah Voss/TCPalm.com via AP)

For the past few weeks, many photographers, ornithologists and nature lovers have noticed and witnessed the slow destruction of the most important marsh on the island of Montreal since the beginning of the construction of the future REM station.

TechnoparcOiseaux is a group of more than 2,600 members who have been concerned about the well-being of birds and wildlife in this region since 2016.

Prior to 2017, this territory was the largest wetland on the island of Montreal and the only one that the REM had to be concerned about.

At the time, the CDPQ informed us that it would be cautious when work began.

The way the work and related activities are currently being carried out will have lasting negative effects on this wetland ecosystem if certain practices are not changed.

Since the start of construction, there has been an increase in human disturbance (nearby parking, noise, garbage, illegal dumping, and lighting).

If these behaviours persist over the next few years, this pond that was so alive will become a simple city pond with a few ducks and geese.

In addition to the current work, the degradation of the pond has also been caused by the cutting down of nearly 4,000 trees for the eco-campus, not to mention the damage to the vegetation caused by heavy machinery. These actions have also resulted in the erosion of the pond's banks.

Ironically, for years, the promoters of Technoparc Montreal and Ville Saint-Laurent promoted their eco-campus through the presence of the Étang aux Hérons, which they called their jewel.

In reality, current methods are inconsistent with the initial claims.

We are now in late fall and wildlife is hardly visible around the pond.

But the negative effects of the REM work will start to be felt from March, as soon as the migratory species return.

About 60 species nest around this wetland and more than 100 species use the area for food, shelter or stopovers during their migration. Some of these species, particularly those in the wetlands, are sensitive to human disturbance. Species will certainly leave this area upon arrival this spring if this disturbance continues.

One argument is that they will move to the nearby Ipex Marsh or Marais des Sources. The reality is quite different.

Yes, it is possible for a couple to settle there, but the local species defend the limits of their nesting territory and are not content to let others enter their habitat.

The Heron Pond is the richest of the ponds in the area in terms of food for wildlife. It, therefore, attracts many species during the spring and fall migrations and during the summer months.

To help you find solutions before long-term effects occur in this pond, we offer the following recommendations:

These recommendations could be useful for the future of this wetland, but our recent findings are causing a lot of concern to our members. We fear irreparable damage on your part.

The TechnoparcOiseaux group is always at your disposal if you need more information or other data that may be useful to you.

We are not against the EMN project, but we want the fauna and flora to be respected.

We thank you for the attention you will give to our concerns and for the diligence with which you will deal with this file.