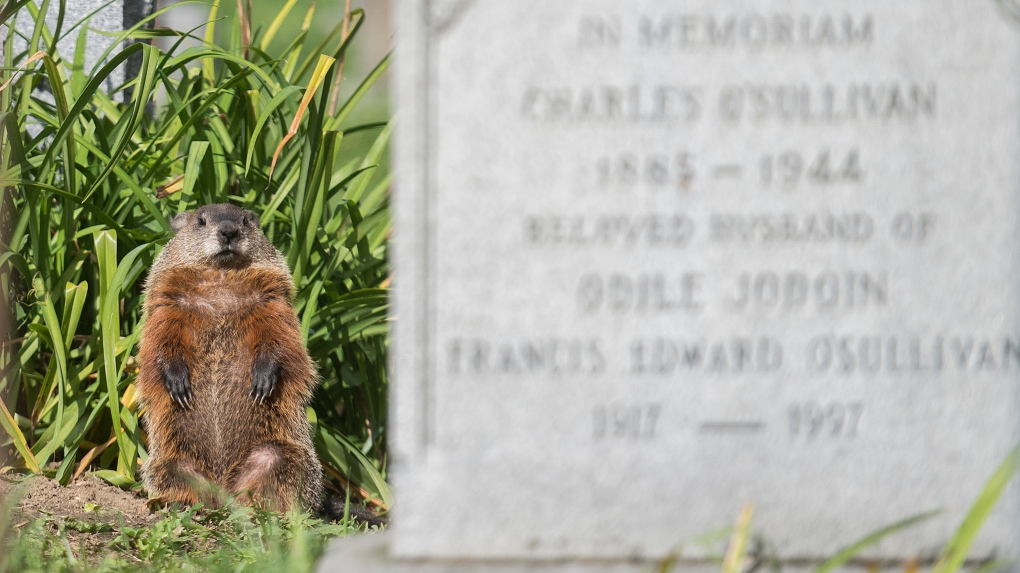 A groundhog looks out from its burrow beneath a gravestone at Notre-Dame-des-Neiges cemetery in Montreal, Friday, Sept. 4, 2020. THE CANADIAN PRESS/Graham Hughes

MONTREAL -- When Michelle McSweeney saw a groundhog crawl into an above-ground tomb at Montreal's Notre-Dame-des-Neiges cemetery, it was hard not to be freaked out.

"I heard it rattling around," she said. "At least I saw it go in, otherwise I would have been really terrified."

Groundhogs have long been a common sight around the city, where their scurrying presence may delight wildlife-watchers but constitutes a nuisance for gardeners tired of filling in burrow-holes.

But in the vast cemetery on the slopes of Mount Royal, the hole-digging behaviour has taken on a grimmer aspect as the rodents dig up old graves and occasionally leave bones scattered on the surface.

Daniel Granger, a spokesman for the cemetery, says workers "occasionally" come across bones that have been unearthed by groundhogs.

"Not every day, but it happens a few times in the summer," he said.

When it happens, he said the bones are collected and reburied in the same spot where they are found, and the burrows are sealed.

McSweeney, who has visited the cemetery about 10 times a year for the past five or six years, says she's seen bones next to groundhog holes on two occasions, both about two years ago. On other times, she's seen metal handles or pieces of decoration from coffins.

She says it's unpleasant but also "natural."

"For me it was mostly surprising and a little sad, but it's not totally unexpected given how many holes and how deep the holes are," she said.

On Friday, a 20-minute walk through the cemetery quickly revealed over half a dozen groundhogs, many popping in and out of holes at the base of gravestones, while burrows and tunnels could be seen on most rows.

McSweeney says she sees at least 10 groundhogs every time she visits the cemetery, and feels their numbers have increased in the last couple of years.

Granger, on the other hand, doesn't believe the problem is getting worse, even though he guesses there may be hundreds or even thousands of groundhogs on the grounds.

But he noted there have been fewer foxes sighted on the mountain in recent years, which might have helped a groundhog population boom.

"Does it contribute a little? Maybe," he said in a phone interview.

David Rodrigue, a biologist with the Ecomuseum Zoo west of Montreal, says groundhogs are an "edge species" that need open ground to dig in but also places to hide, such as bushes or shrubs.

"If you look at the cemetery, it's actually perfect habitat all around," he said.

Rodrigue said groundhogs have teeth that are constantly growing, and they need to chew on things to keep them pared down, including wood or even bones if they find them.

"If they're digging burrows and they hit bones, they'll use that, a lot of animals do that in the wild," he said.

He said it's hard to tell for sure if the number of groundhogs in the city has increased, because there has been no official count in recent years.

However, he said many species of urban wildlife appear to be doing well this year, possibly due to the drop in regular activity caused by the pandemic. Groundhogs, as an adaptable species, could well be part of that, he said.

Granger said there's not much the cemetery can do about the groundhogs besides plugging their holes, because city rules prevent more drastic action.

Rodrigue, for the most part, agrees. He said an increase in the groundhogs' natural predators, such as foxes and coyotes, could help control their numbers. Otherwise, he said, cohabiting is likely the best bet.

McSweeney says the wildlife at the cemetery is a big part of its appeal. Nevertheless, she hopes the cemetery will come up with some clear directions on how to report bones that are sighted, so families visiting their loved ones can be spared a disturbing sight.

This report by The Canadian Press was first published Sept. 13, 2020.