Newly released documents paint a poor picture of Quebec's elementary and high schools, with many of them getting failing grades for the conditions of buildings.

In some cases, that means buildings need major overhauls and English-language schools were among some of the worst in Quebec, but the government says it is making progress after what it described as "years of frequent neglect."

It's why in March, the Eastern Townships School Board inaugurated a new school—the first in more than half a century since the Old Drummond Elementary School was out of space. At this school, the bathroom was only accessible through the gym and a storage room doubled as a French class.

It was just one of the schools in need of expansion or repair.

"I can remember going into a school where outside the principal's office in the corridor there was a bucket and the water was plunking into it from the ceiling above," said Michael Murray, chairperson of the Eastern Townships School Board.

A list provided to Radio-Canada under access-to-information legislation and obtained by CTV News showed that the school board has 59 per cent of buildings with a D grade, meaning poor, and 32 per cent rated E, or very poor.

At the English Montreal School Board (EMSB), 45 per cent of schools with were graded poorly and 47 per cent were graded very poorly.

Just over half of all schools under the Lester B. Pearson School board received a D and 9 per cent were graded E. 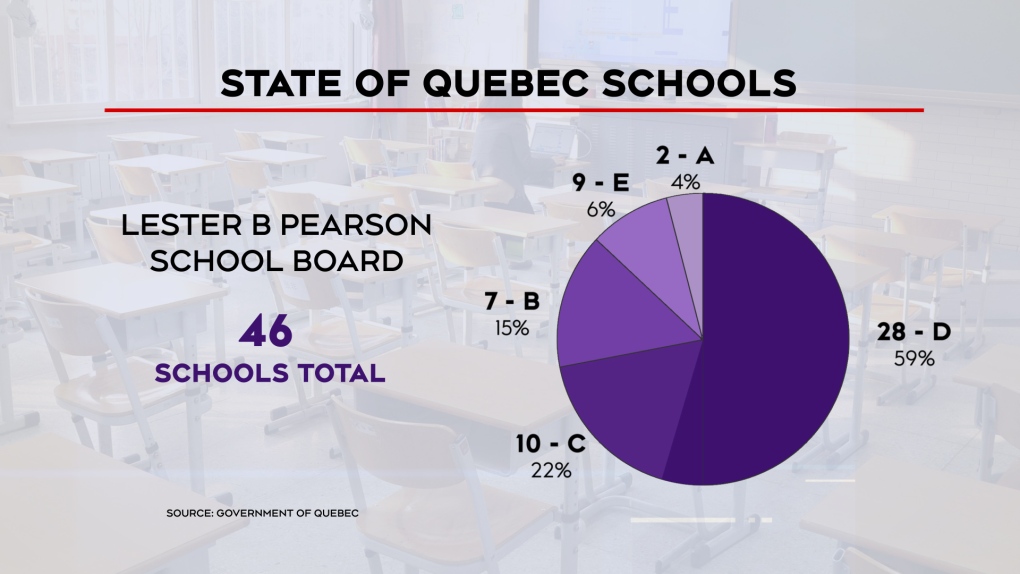 Lester B. Pearson School Board grades. (Source: Government of Quebec)

Meanwhile, the New Frontiers School Board none of its schools passed. The board said the province recently changed its ranking system.

"These rating changes were expected. What we need to keep in mind is that our buildings are in the same condition they were, just evaluated differently," the board wrote in a statement to CTV.

"A positive outcome is that our funding envelope for building repairs has increased by $2.2M for the 2022-23 school year, and this money will be invested accordingly. In fact, over the summer – with many projects already underway – NFSB will be spending $6.5M on 42 different building repairs/renovations."

The EMSB said it has received more money, too, but said Wednesday that "naturally, no matter what amount a school board receives it is never enough. In our case, we have over 60 buildings to manage," in a statement from spokesperson Michael Cohen.

"Recently we have gone out of our way to highlight different projects and we have some exciting ones to share in the coming months."

The EMSB's chairperson, Joe Ortona, added that it's high time to open a dialogue with the government about giving school boards more autonomy when it comes to how they spend their money.

"Currently, the government authorizes major renovations. If a project is refused, we are given no money for it. So, essentially, the state of our schools is due to the decisions of the ministry," Ortona wrote in an email to CTV.

Quebec's education minister, Jean-François Roberge, told CTV that the CAQ government now has a better grasp on the condition of schools across the province and that even though some schools are in poor condition they "remain safe."

"Never has a government invested so much in school infrastructure and, more particularly, in the construction of schools," read a statement from Roberge's office. "We have just completed a vast inspection operation and for the first time, the government now has an accurate portrait of the state of our schools."

In the Eastern Townships, Murray said funding there has gone up by around $10 million dollars in the past four years. He said the money will go towards improvements like air conditioning, which he said most schools' didn't have.

As far as the ranking system is concerned, he said it doesn't represent the quality of education.

"The rating system is, I think, far more focused on measurable things like how old is the school than aesthetic things like how good the learning environment is, which is very much harder to estimate," he said.

He said students are making the grade even if some of the buildings aren't.

For the second time in less than a month, a resident of Ashcroft, B.C., died while waiting for health care.