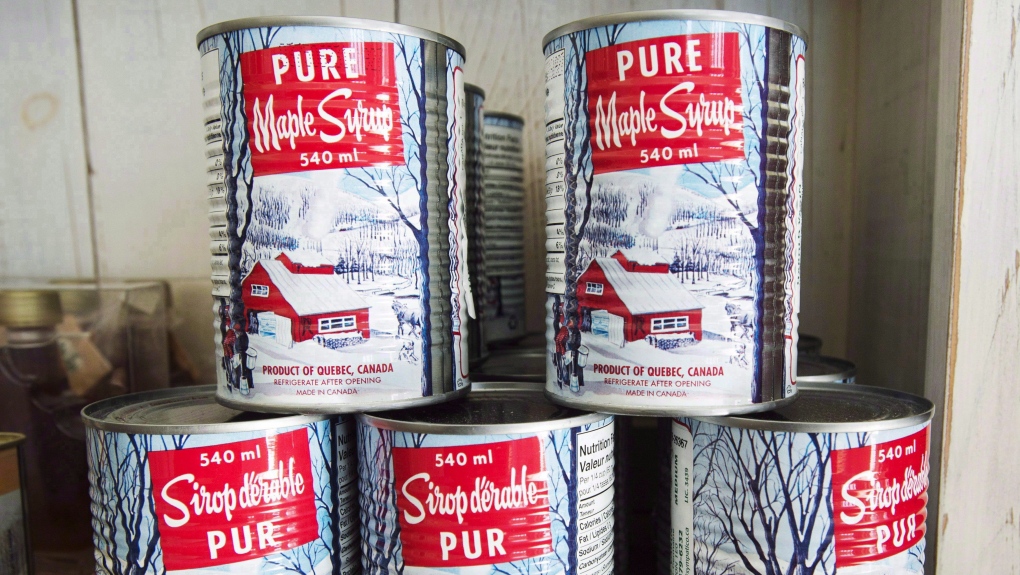 Maple syrup cans are seen at a sugar shack in Oka, Que., on February 10, 2017. (THE CANADIAN PRESS/Ryan Remiorz)

MONTREAL -- It’s a sweet twist of fate, depending on who you ask.

This year happened to bring in a record production of maple syrup—right as the sugaring season was cancelled.

It was cruel irony for families that run maple productions. But it means that $75,000 worth of syrup is on its way to be donated to Quebec’s food banks.

While food bank users will be thrilled with this news—real maple syrup is far too expensive to be a common item at food banks—the donors said they’re happy about the outcome, too.

“Now it’s our turn to do something for the community. If our liquid gold can ladle a little sunshine onto people’s plates, so much the better.”

To match the bumper crop of syrup, demand has been soaring this year at food banks. The Quebec food bank association is reporting an increase of 30 to 40 per cent in demand since the start of the pandemic.

A study in May found that 1 in 10 Quebecers had turned to food banks this spring, half for the first time in their lives.

The gift adds up to 10,560 cans of syrup that will be distributed throughout the province. Moisson Montréal, a registered charity that collects donations for 253 Montreal community food banks and other organizations will be in charge of the syrup effort.

“That’s just what people need in the throes of the pandemic and the recession, and we particularly appreciate non-perishables. I’d like to thank all of Quebec’s maple syrup producers for their wonderful generosity.”

The maple producers’ association represents 11,300 producers and 7,400 businesses who are together responsible for making about 72 per cent of the world’s maple syrup.

With the cancellation of the year’s sugar-shack activities and the other aspects of the economic downturn, COVID-19 has cost most of them tens of thousands of dollars at least.

"It's a catastrophic situation," the producers’ association told the Agence France-Presse in April.

According to that report, the assocation normally keeps more than 45,000 tonnes of syrup stored in order to regulate prices. It’s kept in barrels in a warehouse the size of five football fields.