A woman has died and dozens more have fallen ill following an outbreak of COVID-19 at Good News Chapel in Montreal, her family says, where religious leaders have been accused of spreading misinformation about the virus and disregarding public health measures.

The 61-year-old woman, whose first name is Diana, died Sunday, two weeks after being admitted to hospital, according to her family. CTV News has chosen not to publish her full name.

Her cousin, Judy Fuoco, believes Diana caught the virus at the Good News Chapel, in the city's St-Leonard borough.

“Her family, Diana, and her husband decided they didn't need to be vaccinated based on what they were being told at church,” Fuoco, who is also a former follower of the church, told CTV News in an interview.

Diana’s mother also died of complications due to COVID-19 almost a year ago, Fuoco said, before vaccines were available.

“She should have known better,” she said. “But she really truly believed in her faith to the point where she said, 'I’m going to follow God this way, not vaccinate, and have faith.'”

Fuoco left the Good News Chapel in 2019, when she said the sermons started getting too political.

“This death could have been avoided,” she said.

CTV News has interviewed multiple people who are close to the church but who do not currently attend. They said it has a culture of vaccine hesitancy and resistance to COVID-19 measures, pushed by the church leadership.

The church has made headlines in the pandemic before. On Feb. 14, 2021, its members openly violated gathering limits by welcoming over 100 people into the building in protest of Quebec’s lockdown measures, which its pastor, Steve Gesualdi, called “ridiculous” at the time.

“Too many people are suffering from other things far more dangerous than COVID-19. Suicides are up, depression is up, anxiety is up,” he said the night of the protest.

Since then, those opinions have been incorporated into his sermons, many of which were posted to social media but appear to have since been deleted.

As rumours spread through the community that the virus was taking hold, and calls from within the congregation to close the church grew louder, Gesualdi told his followers in at least one now-deleted video posted to the Good News Chapel’s Instagram page that he believed the doors must not close.

“There are a few people who have called and said they have the symptoms of COVID-19, and they’ve gotten tested,” he said.

“The thing is, it has nothing to do with the church… we’ve seen God’s hand of protection on our church.”

Days later, on Sunday, November 28, while Diana was intubated in hospital, a defiant Gesualdi stood at his pulpit in front of a full congregation.

“There can be no order given,” he proclaimed to loud cheers, “that can ever shut down the church of Jesus Christ.”

Gesualdi told his congregation that if they are not ready for a battle, they should stay home -- before wondering aloud if he was being irresponsible. His conclusion was that he was not.

“'You know, you should use your pulpit to tell people to get vaccinated,'” he said, imitating his critics.

“It’s none of my business,” he retorted. “The one who keeps you safe is none other than the one that sits on the throne, Himself.”

In an earlier Instagram video, Gesualdi referenced a previous online sermon, which is also no longer visible online but which CTV News has viewed, showing him leading a communion service.

During the sermon, he said, he had gotten several messages from followers who reported overcoming symptoms associated with COVID-19, such as lack of taste.

“'As I was eating the bread, I could [once again] taste the bread and the juice,'” he said, reciting a message.

“They were very definite things: ‘My taste got restored, my sinuses opened up… I was cold and shivering -- by the time we took communion, my temperature went back to normal.'”

Turning his attention to those “who have fallen ill in these past couple of weeks,” he said in the sermon, “no one is going to go," he said. "God is going to lift them all up."

Shortly after, he turned to prayer.

“Father. I pray for Diana, as she’s in the hospital, Lord, and I thank you because things are changing on a daily basis," he said.

Gesualdi did not respond to specific questions from CTV News, but said that an article published Tuesday by Le Devoir about the outbreak was "full of falsities." 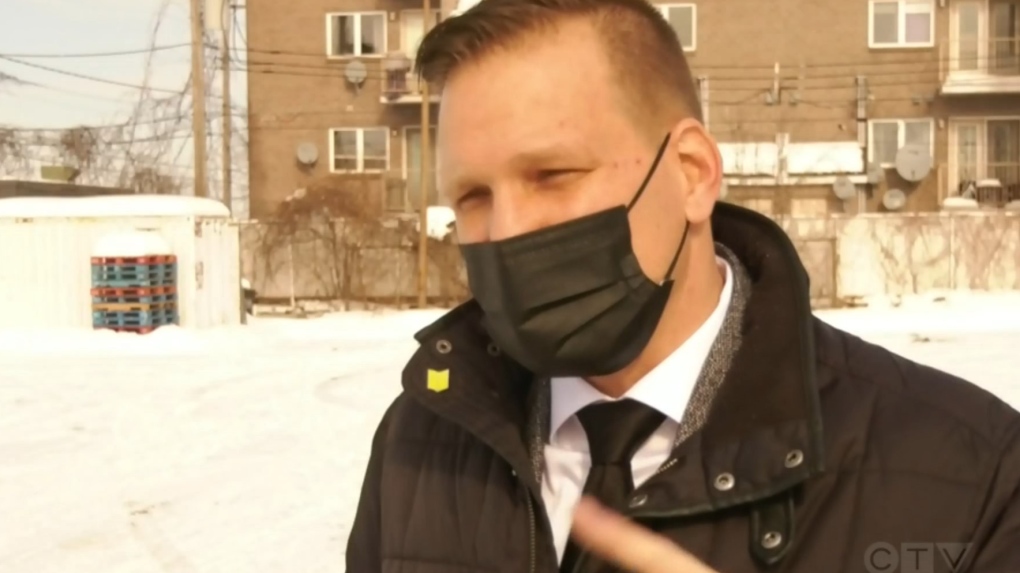 Montreal Public Health would not confirm Diana’s death was linked to the outbreak at Good News Chapel, citing a policy of not commenting on individual cases.

However, between Nov. 11 and Nov. 23, public health was able to trace 10 coronavirus infections to the church, according to a document provided by an anonymous source, the validity of which CTV News has confirmed.

Of those 10 sick people, three were admitted to hospital, and one was in the ICU.

Authorities visited the chapel on Nov. 28 and reported people were not wearing masks, nor were they practicing social distancing, the document read. Both actions are violations of Quebec’s COVID-19 measures for places of worship.

Public health also wrote that more cases could still be discovered, since the chapel did not keep an adequate ledger of those coming and going from the building.

“Other cases may have escaped investigations and there exists a risk of virus transmission by infected people with little or no symptoms,” the health authority said.

In a letter, dated Dec. 1, public health ordered Good News Chapel to restrict access to fully vaccinated people only, encourage followers to get tested, report all cases associated with the outbreak, and keep an updated ledger.

“If an establishment does not respect these public health rules, they expose themselves to possible consequences that can go as far as closing the establishment,” said Jean Nicolas Aubé, spokesperson for the CIUSSS Centre-Sud, a regional health board in Montreal.

CTV News reached out to Gesualdi to ask if he planned to follow public health’s demands, but it did not receive a response.

‘SHUT IT DOWN’: A DIVIDED COMMUNITY

For Fuoco, the time for warnings is over. She wants public health to close the church.

“Please shut it down, because they will not,” she said. “Don’t let anybody else get sick.”

“It seems that every day, we're getting news of some new case,” she continued. “And although we don't know all the people that are infected, when it's someone in our family, it really hits home.

“You want to feel sad. But at the same time, you're angry," she said. "So you can't even grieve properly."

Beyond the 10 documented cases, some say they’re afraid many more people have gotten sick and haven’t gotten tested.

Jonathan Di Carlo grew up following Pastor Steve Gesualdi but left the church in 2017. He said much of his family still attends.

Di Carlo told CTV News he’s personally aware of between 25 and 50 people, either followers of Good News Chapel or their friends and family, who have caught COVID-19.

“But [many of] the ones that were not hospitalized never got tested,” he told CTV News, “for fear of having to trace contacts back to the church.”

Fuoco said she knows of at least 20 people who are sick and has heard the outbreak may have spread to more than 50.

“I think that they want to keep the name of the church off-record,” she said.

The chapel serves a tight-knit community in St-Leonard, which others, including Fuoco and Di Carlo, say has been torn apart by conflicting views of how the church has handled its outbreak.

“It causes division where either they don't talk to each other anymore, or they kind of have this unwritten consensus to not talk about church-related items to kind of keep the peace.”

Both he and Fuoco say they’ve been ostracized by certain family members.

“I've been blocked by several members of my family on social media. We don't share the same opinions when it comes to Good News Chapel,” Fuoco said.

“I really tried to make them see that vaccination is not evil, that it's there to protect us," she said. “It can all be prevented."