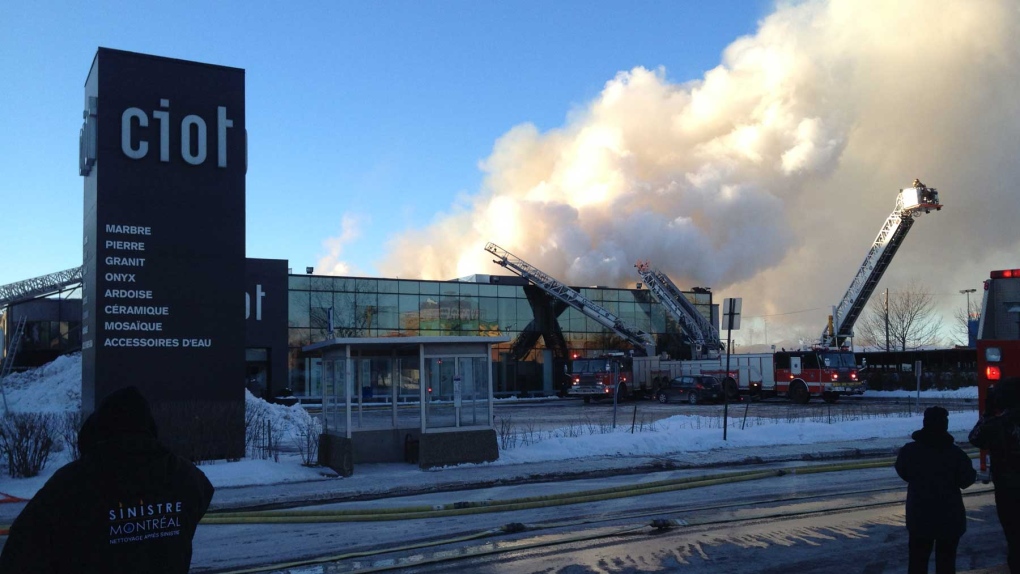 MONTREAL—Part of St. Laurent Blvd. was closed until 8:15 Monday morning as work crews continue to clean up from Sunday's fire.

The general alarm fire broke out at a ceramics warehouse on St-Laurent Blvd. near Chabanel St. Sunday afternoon, sending a heavy plume of thick smoke into the air above Ahuntsic-Cartierville.

Businesses between Legendre and Chabanel -- including Ciot, the store where the fire began -- had not finished cleaning up the water that spilled and froze.

CTV News crews spotted many businesses boarding up windows and doors which were damaged by the fire.

Earlier in the day, a fire at a commercial garage broke out in Ste-Julie, part of a rash of blazes across the province that have accompanied a stubborn cold front.

With the blaze under control in Ste-Julie, first reports indicated that a dump truck caught fire at 161 Rue Principale just before 2 p.m. on Sunday.

In Longueuil, firefighters received a call at 2 a.m. on Sunday after a small fire broke out in a kitchen on Thomas St. One man was taken to hospital and was treated for injuries that appeared non-life-threatening.

A series of small fires on Friday and Thursday kept Montreal’s fire department busy as red-hot heaters and frozen pipes across the island led to a number of incidents. Temperatures are expected to warm over the next week.