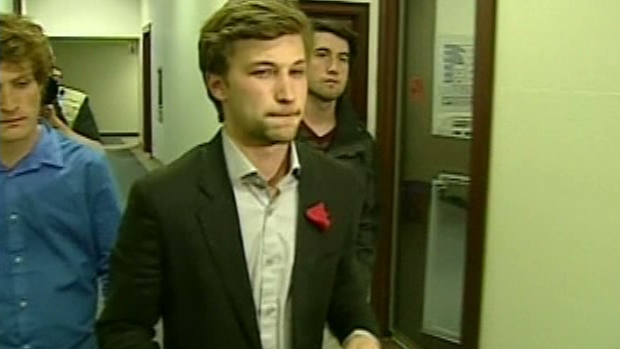 Gabriel Nadeau-Dubois has been sentenced to 120 hours of community service after being found in contempt of court.

The former student leader and spokesperson for CLASSE was found guilty in November, when Justice Denis Jacques ruled he had incited protesters to ignore court orders.

During the student movement that rocked Quebec in the spring, some students sought and were granted injunctions banning demonstrations from interfering with their classes.

Jacques ruled that Nadeau-Dubois encouraged protesters to violate those injunctions with statements he made during an interview with Radio-Canada on May 13, 2012.

In a televised interview, Nadeau-Dubois's exact words were “I think that it is completely legitimate for students to undertake the means necessary to respect the democratic choice to strike. It’s completely regrettable that a minority of students are using the courts to go around decisions that were made collectively.

“If students need to form picket lines to ensure that their strike votes are respected, we think that’s completely legitimate.”

University of Laval student Jean-Francois Morasse, who had an injunction so his classes could proceed, filed a complaint against Nadeau-Dubois that went to trial in September.

After being found guilty Nadeau-Dubois said he would appeal the verdict, and has raised more than $100,000 from supporters for his legal challenge.

Nadeau-Dubois contends that the ruling creates a precedent against spokespeople for organizations.

In his ruling, the judge said that Nadeau-Dubois was much more than a spokesperson and should have acted accordingly.