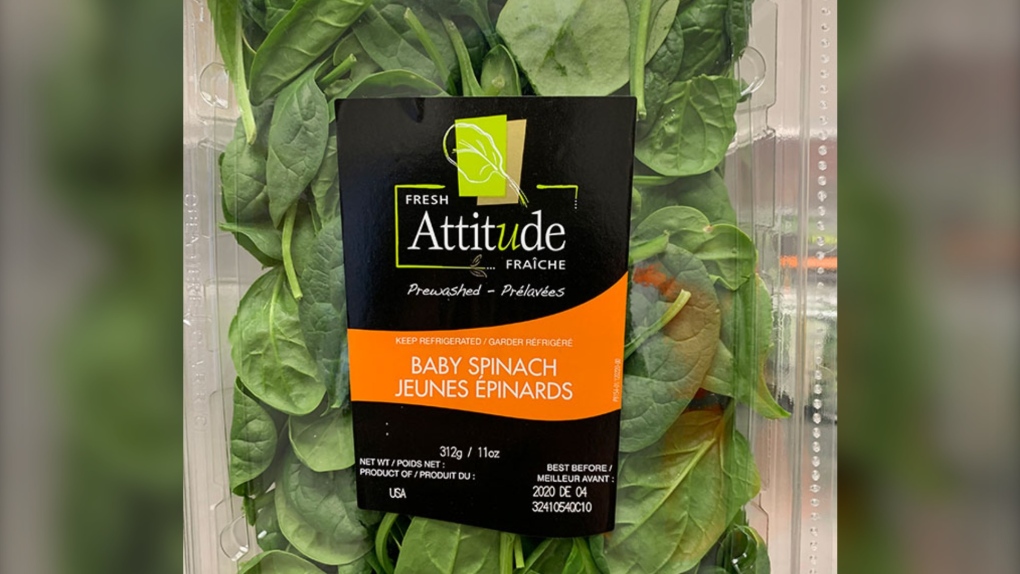 Fresh Attitude baby spinach has been recalled due to a possible salmonella risk. SOURCE: CFIA

The recall was triggered by Vegpro and concerned two of their Fresh Attitude baby spinach products. The specific items that carry the risk of Salmonella contamination are those in the 312g and 142g packages, expiring on Dec. 4 and 5. Vegpro distributes food in both Quebec and Ontario.

According to Jean-Louis Michaud, a representative for the CFIA, Vegpro brought the potentially contaminated products to the attention of the agency and the two quickly agreed on a recall. This kind of voluntary submission is one of the ways a food recall is initiated in Canada.

“It can also be triggered by consumers, who play an important role by informing us of bad experiences when consuming a product,” explained Michaud.

At other times, CFIA has to conduct its own inquiry to find contaminated food and force the company to execute a recall, although Michaud says this happens very rarely.

This is not the first time Vegpro’s line of green foods has caused trouble. In March 2019, CTV reported on a Montreal woman who found a small living frog in the plastic packaging for Fresh Attitude spinach she was about to make breakfast with. In response, Vegpro said their cleaning equipment must have not detected the small frog amongst the greens.

Unlike the frog, however, contaminated food can be difficult to detect for consumers. In their recall statement, the CFIA warns that “Salmonella may not look or smell spoiled but can still make you sick."

The CFIA is currently conducting a food safety investigation, which could lead to further recalls if more high-risk products are discovered. The agency has also confirmed that Vegpro is removing the potentially contaminated products from the market.

Investigations like this always happen when a defecting product is discovered, and aims to make sure there is nothing else harmful out on the market. Michaud explained that investigations cover the other products of the company and, depending on the situation, may involve an inspection of the company’s facilities and fields. If any action is to be taken, an investigation must happen.

“Until we have evidence that a food represents a risk to human health, you just cannot ask for the product to be removed,” Michaud added. “We can’t function like that, so we need to further investigate.”

Vegpro declined CTV's request for an interview, though they are expected to publish a public statement.

If you should happen to buy a contaminated product and fall sick, the CFIA advises you contact your doctor and check your home for other recalled products. These should be either thrown out or returned to the store where they were purchased.

Here are a few recommendations from the CFIA on how to be more careful around food products:

So far, no one has fallen ill due to these products.