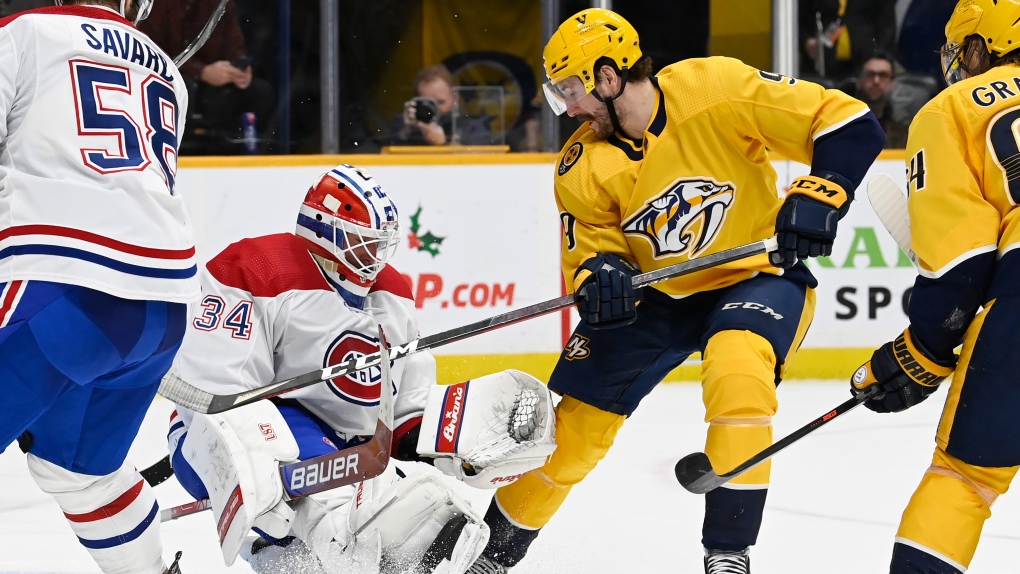 MONTREAL -- The Canadiens put up a good fight but suffered another setback Saturday night at Bridgestone Arena.

Filip Forsberg scored in overtime and the Nashville Predators beat the Montreal team 4-3.

Forsberg grabbed the win with 11.1 seconds left in the extra period. He had just picked up his stick when he took a cross-ice pass from Mikael Granlund and beat goalie Jake Allen.

The Canadiens defeated the Predators 6-3 at the Bell Centre on November 20.

The Predators win it in overtime.

Luke Kunin had a goal and an assist, while Eeli Tolvanen and Tanner Jeannot also scored in regulation time for the Predators (13-10-1). Mattias Ekholm had two assists and Juuse Saros turned aside 20 shots.

The Tricolore is 1-17-3 this season when scoring three goals or less.

Forward Mike Hoffman returned to the lineup for the Habs, relieving Josh Anderson who was injured on Thursday during the match against the Colorado Avalanche. Mattias Norlinder was also back in the lineup, replacing Jeff Petry, who was faced with an upper body injury.

The Habs will play their next game on Tuesday when they host the Tampa Bay Lightning at the Bell Centre.

CHANCES ON BOTH SIDES

The Predators dominated their rivals early on. Midway through the first 20 minutes, the Predators led 1-0.

Tolvanen opened the scoring 4:52 into the game, deflecting a shot from Ekholm.

The Habs got on the board in the second half, but were denied by Saros on the power play.

Michael Pezzetta applied a good check against Matt Benning early in the second period, then threw the gloves off to Mark Borowiecki. Heading to the penalty box, Pezzetta yelled at the Habs bench, waving his arms and asking his teammates to play with more energy.

The Tricolore tied the game on the power play at 4:48. Suzuki got the ropes moving with a crisp, accurate shot on the top end.

Dvorak then put the Habs ahead 2-1 at 10:01, moments after winning a race to overturn a disallowed clearance.

The Predators’ head coach John Hynes challenged the goal, to no avail. Then the Tricolore found themselves on a two-man power play for 64 seconds, but were unable to capitalize on the situation.

Suzuki and Poehling had two-on-one attacks in the next few minutes, but they may have been too generous and the Habs were unable to capitalize on those situations.

The Predators tied the game 2-2 with 2:36 to go in the second period. Jeannot deflected another Ekholm shot on goal.

Allen allowed the Habs to return to the locker room in a 2-2 deadlock, being smoked past Forsberg in the final moments of the period.

Kulak put the Habs back in front 3:10 into the third period, but Kunin answered at 10:12 on a scrum in front of Allen’s net.

Artturi Lehkonen could have settled things in regulation time when he broke away with less than two minutes left in the third period, but Saros made the save.

Allen also made a save on Granlund in the final moments of the third period.

Forsberg finally allowed the Predators to have the final say.

—This report was first published in French by The Canadian Press on Dec. 4, 2021.