Former Hells Angels boss Maurice "Mom" Boucher, regarded as one of the most infamous criminals in Quebec history, has died.

Boucher suffered from generalized throat cancer while serving a life sentence at the Sainte-Anne-des-Plaines Penitentiary north of Montreal. He was in medical care at the time of his death. He was 69 years old.

Boucher was one of Quebec's most notorious criminals. After joining the Angels in the late 80s, he co-founded a local chapter in the 90s, and grew to control a multi-million dollar drug trafficking empire.

On May 6, 2002, he was jailed for ordering the assassination of two Quebec prison guards in 1997, Pierre Rondeau and Diane Lavigne.

During his time in prison, he also pleaded guilty to a conspiracy to kill rival underworld figure Raynald Desjardins, who himself was jailed after being sentenced for conspiracy in the slaying of Mob boss Salvatore Montagna in 2011.

By the time of his death, he had been convicted of two counts of first-degree murder, attempted murder, conspiracy to murder, assault with a weapon and carrying a weapon with a dangerous purpose.

"My first thought, when I heard about Boucher's death today, went to the jail guards," said Guy Ouellette, a former provincial police officer who, during his three-decade career, worked to catch members of the Angels, including Boucher.

"We talk about Boucher, (but) we have to never forget about these two jail guards who were innocent victims of that biker war." 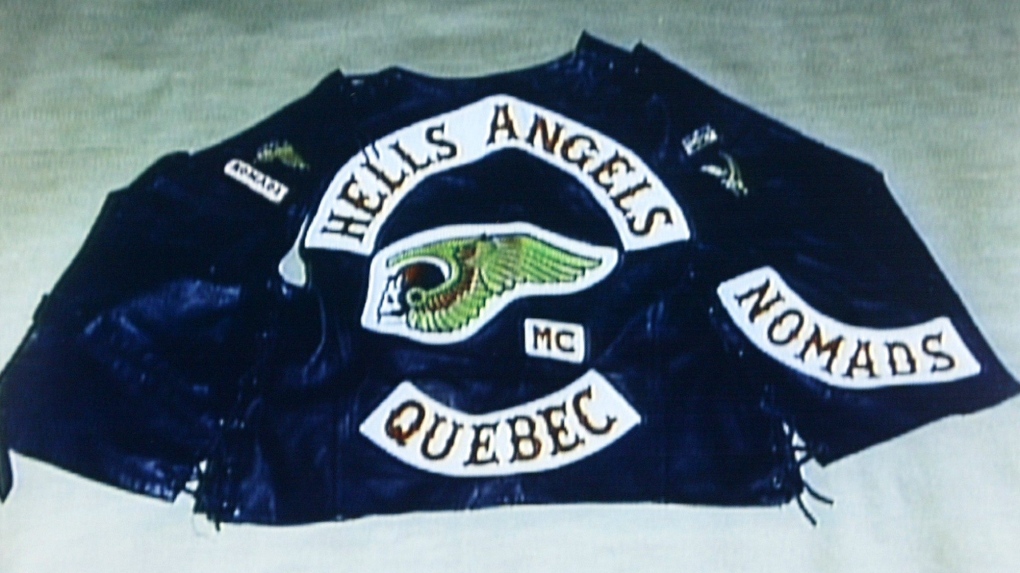 A photograph of Maurice Mom Boucher's vest was submitted as evidence, Wednesday March 27, 2002, in the trial of the Quebec biker. Boucher, leader of the Hells Angels in Quebec, faces two counts of first-degree murder and one count of attempted murder for allegedly ordering the deaths of two prison guards in 1997. (CP PHOTO)

That "biker war" began in 1994 and spanned eight years as the Hells Angels fought for distribution turf against rival group the Rock Machine. It is regarded as one of the most violent gang conflicts in Quebec's history.

"Boucher wanted control of the drug market in certain areas of Montreal," said Ouellette, who is now an MNA for Chomedey, Que.

He added Boucher's death is just "another page" in the biker war legacy.

"I just feel sorry for the victims."

During his time in prison, reports surfaced suggesting Boucher had been stabbed in a 2010 fight involving four people, two of whom were stabbed.

In 2002, the year he was arrested, Boucher survived a makeshift-knife attack after other inmates came to his defence and killed his attacker.

"Why? We've never been sure of the attacker's intentions," said crime reporter Daniel Renaud, who has written about Boucher's time in prison for La Presse.

It's possible, he said, his attackers "were looking to prove their valour."

The coroner will look into the death of Maurice Boucher, and "as is always the case in the death of an inmate, the Correctional Service of Canada will examine the circumstances of the incident," the CSC said in a news release.

Food prices in Canada will continue to escalate in the new year, with grocery costs forecast to rise up to seven per cent in 2023, new research predicts.

Most Canadians back invocation of Emergencies Act during 'Freedom Convoy' protests: Nanos

As the inquiry into the federal government's decision to use the Emergencies Act during the 'Freedom Convoy' protests nears the finish line, a new survey has found that two in three Canadians say they support, at least to some degree, the invocation of the Act.

Canadian patient receives groundbreaking treatment for a disabling disorder, with a parathyroid transplant into her arm

Canadian doctors say they have cured a patient with a severe and disabling disorder with a parathyroid transplant from a deceased donor. Dawn Ethier, a mother of four and police officer in Ottawa, is the first in North America and one of perhaps two in the world given new parathyroid glands that have eliminated her debilitating symptoms.

Bob McGrath, an actor, musician and children's author widely known for his portrayal of one of the first regular characters on the children's show 'Sesame Street' has died at the age of 90.

Former U.S. President Donald Trump faced rebuke Sunday from officials in both parties after calling for the “termination” of parts of the U.S. Constitution over his lie that the 2020 election was stolen.