For now, English schools must keep abiding by Bill 21 after appeal dismissed

For now, English schools must keep abiding by Bill 21 after appeal dismissed 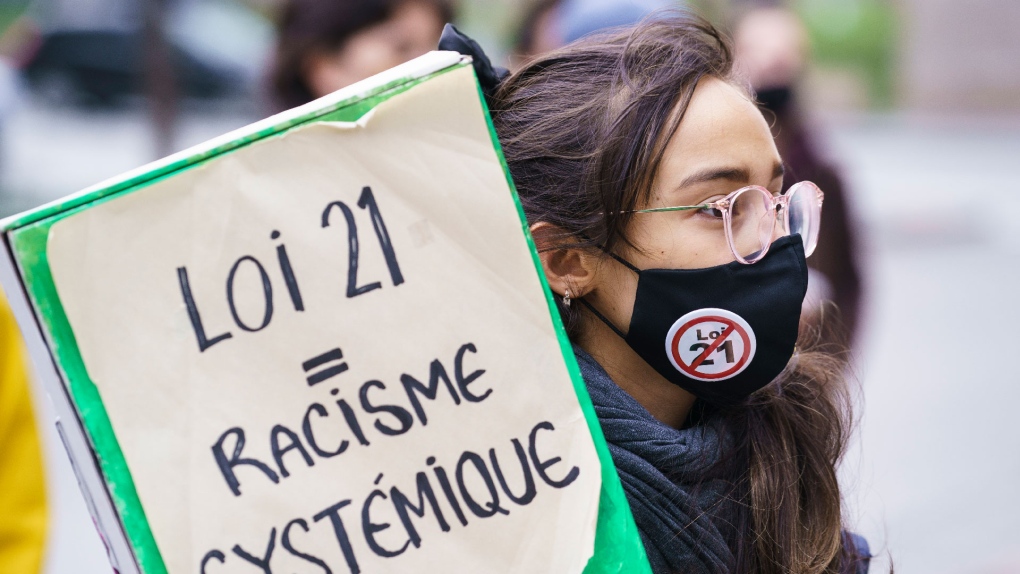 English schools in Quebec may have won their case against Bill 21, but they won't be able to act accordingly, at least not for a year or more, until the province's challenge to that ruling is heard.

A judge has dismissed an appeal that sought to allow the English Montreal School Board to proceed as if Bill 21 weren't in place in the meantime, hiring staff with religious symbols.

Instead, they'll need to wait until the case moves up to the next level of court, and then to a possible Supreme Court decision one day -- a very lengthy process.

The board claimed that it needs full hiring flexibility to fill a staff shortage, and that it can't properly promote diversity with the law in place, but it wasn't quite convincing enough, wrote Justice Frédéric Bachand of the Quebec Court of Appeals.

"The school board's objectives in relation to social, ethnic, cultural and religious diversity can still be furthered in many respects" in the meantime, even with the hiring ban, he wrote.

EMSB leaders said they're "disappointed" with the decision, noting that the appeal process will take "longer than a year."

EMSB Chair Joe Ortona said that a "favourable judgment would also have given the EMSB much-needed hiring options at a time when there is a province-wide teacher shortage."

The province celebrated, however, with Justice Minister Simon Jolin-Barrette writing on Twitter that there should be no exceptions to Bill 21.

"The law will continue to apply, as it should, for everyone and throughout Quebec," he wrote.

"It is a victory for the secularism of the state, a value that we will defend to the end."

EMSB CAN PROMOTE DIVERSITY IN OTHER WAYS: JUDGE

Bill 21 became law in June 2019, and Quebec Superior Court struck it down in part in spring 2021 -- most notably for English-language schools, which have well-protected legal rights, as a linguistic minority, to manage themselves.

The province, as well as two other groups, have filed challenges to that ruling that haven't yet been heard before the Court of Appeal.

Under Quebec's unique legal system, Justice Bachand explained, once an appeal has been filed, the law in question is considered to still be in effect unless a group or person can prove that leaving it in place, even temporarily, will cause serious harm.

He dismissed the EMSB's arguments, one by one, finding the proof wasn't there.

The board argued that not being able to hire new teachers with religious symbols will mean "suppressing minority culture," Bachand wrote. But he didn't buy this idea.

"Minority culture," in this context, means English-speakers' culture in Quebec as a linguistic minority.

The EMSB argued in its original challenge to the bill that it cares about having diversity in its schools and that the law is infringing upon that.

English-speakers do have the right to manage their own schools and maintain their own culture within them, but putting off hiring new teachers with religious symbols for a while longer won't interfere with that, Bachand wrote.

"That claim is an overstatement," he found.

Bill 21 rules "undeniably interferes with the school board's policies in some respects," he wrote, but there are other ways to promote diversity other than hiring.

He noted that Bill 21 allows existing staff to be grandfathered in, so EMSB schools still do have staff wearing hijabs and other symbols.

HOW TO FILL A TEACHER SHORTAGE

Bachand also wrote that he accepted the EMSB's evidence that there's a teacher shortage, but that the board didn't convince him, in a concrete way, that teachers who wear religious symbols are crucial to filling it.

Ann Watson, the board's director of human resources, filed sworn statements saying that there are 60 teaching jobs that are either empty or "filled with persons without proper qualifiacations," Bachand wrote.

Being able to hire Muslim teachers who wear hijabs is especially important, she told the court, because most of those jobs -- 48 out of 60 -- are French-speaking teacher jobs.

"In recent years, many French-speaking candidates have been persons from North Africa or the Middle East who wear religious symbols (generally the hijab)," Bachand wrote.

While allowing proper staffing is very important to the public interest, he said, the province filed its own evidence saying that there are about 100 qualified French-speaking teachers "potentially available" to work in English schools right now.

"I find that the facts to which Ms. Watson attests are not sufficiently precise, clear and concrete" to show that hiring will be impossible without the off-limits group, he wrote.

Moreover, he wrote, the board's statements "seem to assume" that these hijab-wearing job candidates would be unwilling to work if they weren't allowed to wear hijab.

Since Bill 21 policies have been in place for more than two years now, Bachand said the EMSB's arguments were "seriously weakened" by a "lack of evidence" that their pedagogical approach has been compromised in those two years.

LISTEN ON CJAD 800 RADIO: The EMSB might have a tougher time hiring staff this year because of Bill 21, says Joe Ortona, Chair of the English Montreal School Board

The Edmonton Oilers say they are mourning the death of Ben Stelter, a six-year-old boy with cancer whom the team rallied around during their run to the Western Conference final.