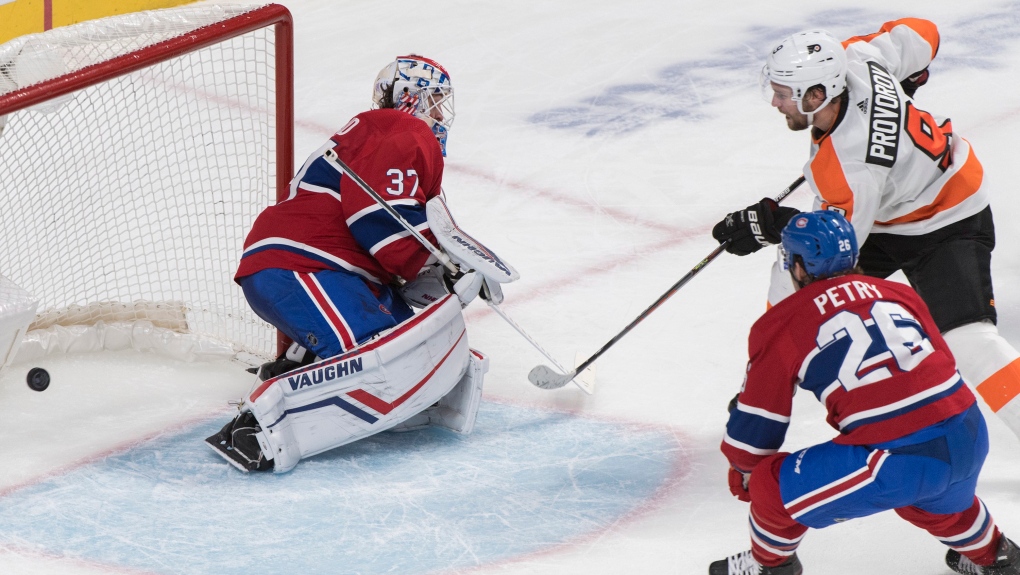 The Canadiens got a point after falling to the Flyers in overtime.#GoHabsGohttps://t.co/ekiwC0zQzV

Oskar Lindblom, Kevin Hayes and Travis Konecny scored in regulation for the Flyers (15-7-5), in the second game of a back-to-back. Brian Elliott made 39 saves.

Joel Armia and Tomas Tatar, with two, scored for the Canadiens (11-9-6), who have lost seven games in a row. Backup Keith Kinkaid stopped 25-of-29 shots.

Carey Price, who conceded 16 goals in his past three games, got the afternoon off. Price will start Sunday night against at the Boston Bruins.

Provorov scored the winner 31 seconds into overtime after a nifty move to get around Max Domi.

The Flyers have at least a point in six straight contests (5-0-1) while Montreal has lost seven games in a row for the first time in two years.

The Canadiens wasted no time with a goal 19 seconds into the game. Armia stormed down the wing and fired blocker side on Elliott, who whiffed on the shot, for Montreal's first lead in a week.

Elliott settled down after that, making the next eight saves in the first period.

The teams upped the scoring pace in the second, trading three goals in a 1:12 span.

Lindblom tied it for the Flyers with his team-leading 11th of the season at 7:47 by deflecting Justin Braun's shot from along the half wall.

Tatar bailed his goaltender out 27 seconds later with his first goal in seven games. The first-line winger blocked Shea Weber's slap shot with his back before beating an out-of-position Elliott.

Jeff Petry gave the puck away needlessly in his own zone, which led to the 2-2 equalizer from Hayes at 8:59 on a top-corner shot from the slot.

Konecny completed a nice passing play between Claude Giroux and Michael Raffl to give Philly the 3-2 lead just 1:34 into the third period.

The Canadiens answered back less than two minutes later through Tatar's second of the contest, 11 seconds into Provorov's tripping penalty.

The Canadiens gave up 20 goals in their previous three games, forcing Claude Julien to tinker with his defensive pairings.

Montreal recalled defenceman Gustav Olofsson from the AHL's Laval Rocket. The six-foot-three Swede, who was drafted by the Minnesota Wild in 2013, made his Canadiens debut playing alongside rookie Cale Fleury.

This report by The Canadian Press was first published Nov. 30, 2019.