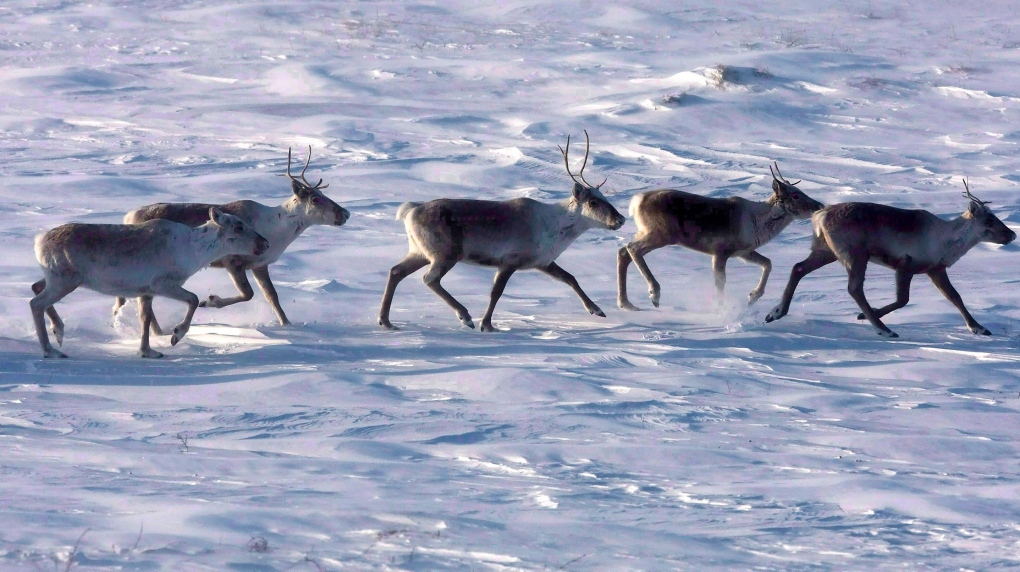 Wild caribou roam the tundra in Nunavut on March 25, 2009. THE CANADIAN PRESS/Nathan Denette

When the Cree Nation recently established a permanent forum with the Inuit of Nunavik and the Naskapis of Nuchimiyuschiiy to collaborate on common challenges, a key issue was caribou management.

"Our relationships with the caribou are quite similar culturally," said Grand Chief Mandy Gull-Masty, adding that all three nations believe the caribou file should be better managed by Quebec and Canada. "We're seeking to bring our voices together and bring forward that pressure and that support as nations to fight for what we need."

Quebec's so-called "independent commission" regarding the fate of woodland and mountain caribou appears to have been the last straw for First Nations and environmentalists. Headed by forest economics expert Nancy Gélinas, consultations are gauging opinions on only two proposed scenarios – one which may restore habitat while threatening forestry jobs and a second in which forestry would continue unabated.

"This commission is a ploy that legitimizes the Government of Quebec's inaction in protecting and restoring caribou and their habitat," according to the Assembly of First Nations Quebec-Labrador (AFNQL). "The preservation of precarious jobs is proposed at the expense of a species of cultural importance."

With "what has become a recurring feeling of disbelief and anger", the AFNQL deplored Quebec's lack of consultations with First Nations and the denial of their caribou expertise. It stated that the scenario of "no impact on the forest industry" is a plan to abandon the three caribou herds of Val-d'Or, Charlevoix and the Gaspé Peninsula.

“The MFFP [Ministère des Forêts, de la Faune et des Parcs] consultations are a joke,” added Chief Lance Haymond of Kebaowek First Nation. "Almost everything is decided unilaterally by Quebec, after which we are invited to share our concerns, and our concerns are never fully taken into account."

"The consequence of this is the oppression and impoverishment of Indigenous Peoples, forcing them to change their diet and lifestyle, resulting in communities that suffer physically, mentally and spiritually," wrote Jérôme and Ferguson. "It's not just the caribou that are endangered in the boreal forest, it's the delicate balance that is essential to life."

Caribou are an important "umbrella species" that indicate a forest's ability to support biodiversity. Herds have declined dramatically in the past few decades, particularly in their southern ranges. Quebec's continued approval of logging in caribou habitats while refusing to negotiate solutions has incited Indigenous communities to act.

In February, the Essipit and Mashteuiatsh Nations accused the province of failing to respect its duty to adequately consult with Indigenous Peoples on caribou protection in Quebec Superior Court. The Innu Council of Pessamit is also preparing to sue the government, suggesting it was willing to work with the federal government to create a protected area proposed in 2020.

"We are ready to go to court for the protection of the caribou and to prevent us from suffering irreparable harm," said Pessamit Chief Jean-Marie Vollant. "The caribou is of fundamental importance. Its decline generates inestimable cultural loss that directly threatens our identity."

When this deadline came and went, Guilbeault said he was proceeding with this decree that would cover 35,000 square kilometres of habitat, dismissing Quebec Premier Francois Legault's assertion that caribou protection was uniquely provincial jurisdiction as "erroneous". The Federal Court of Appeal has confirmed Ottawa's right to intervene to protect an endangered species.

The MFFP protection strategy involves fencing in endangered herds and killing approaching wolves or other predators. In Charlevoix, the remaining 16 caribou were captured, tranquilized and transported to an enclosure where they are fed and observed from a distance.

A herd of just seven animals in Val-d'Or, enclosed in 2020, was given a bigger pen this winter. Plans to capture pregnant females in Gaspésie until they gave birth were postponed until next year.

Reacting to the federal initiative, Dufour attacked the traditional activities of the Nutashkuan Innu, which he said "went to destroy no less than 10% of a herd where there were about 500 woodland caribou."

Nutashkuan Chief Réal Tettaut explained that its council gives authorization for an annual hunt and that several Innu had moved their hunting territory to protect the herd. He urged Dufour to sit down with the Innu if he truly wants to find solutions.

Facing dwindling numbers of the George River herd, the Cree and Innu nations reached a mutual understanding in January that enabled Innu hunters to harvest caribou in Eeyou Istchee according to certain protocols. According to all involved, the resulting hunting expedition was a great success, renewing traditional exchanges and opening doors for future discussions.

As Quebec indicates it may return to the negotiating table with Ottawa, Indigenous and environmental groups called Dufour's comments "brazen gaslighting" while signalling the need for Indigenous-led conservation solutions.

"The federal and provincial governments are throwing the ball back and forth on the jurisdiction around the caribou file, but where is the room for listening to the First Nations?" asked Ronald Brazeau, natural resources director of the Anishinaabe Nation of Lac Simon. "Indigenous leadership must be prioritized rather than blaming First Nations to divert attention from the inactions and failures of the MFFP."

- This report by The Nation / The Local Journalism Initiative was first published on May 18, 2022

Canada will require that companies add nutrition warnings to the front of pre-packaged food with high levels of saturated fat, sugar or sodium in an effort to help grocery shoppers make healthier choices with just a glance.

What tenants can do if their landlord plans to increase rent

What your Canada Day BBQ will cost with hot inflation

The Canada Day long weekend is the perfect time for burgers on the grill, cold drinks and time with family and friends. Yet a backyard barbecue comes with a bigger price tag this year as food prices soared 9.7 per cent in May.