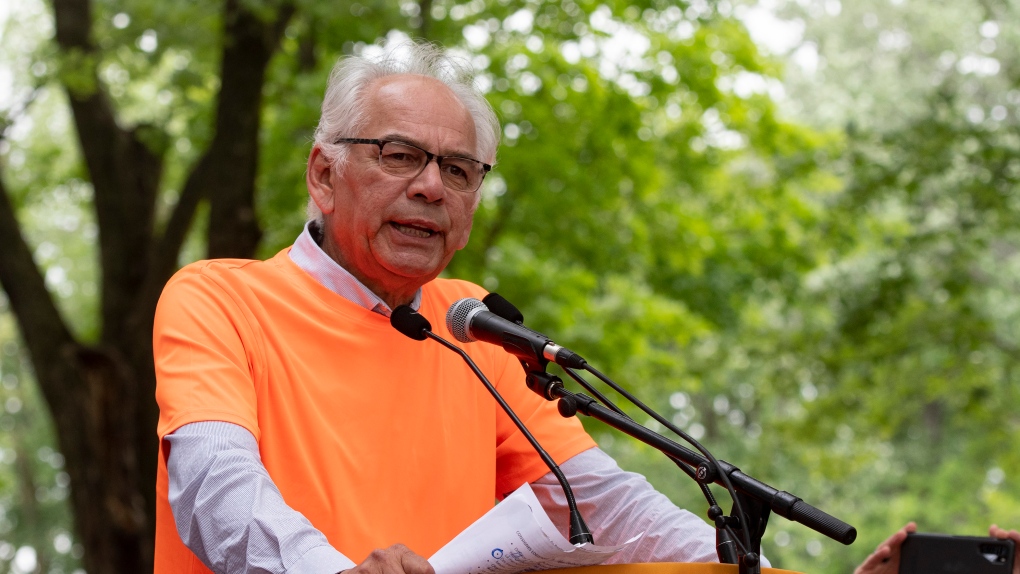 Assembly of First Nations of Quebec and Labrador chief Ghislain Picard speaks during a vigil in memory of Indigenous victims, Thursday, July 1, 2021 in Quebec City. THE CANADIAN PRESS/Jacques Boissinot

The admission, Picard added, reflects a desire within that organization to fight against racism and to respect Indigenous cultures. "These are people who are on the front lines, so such comments coming from them, I don't see how we can contradict this," he said in an interview.

Earlier this week, the professional order, called Ordre des infirmieres et infirmiers du Quebec, issued a statement recognizing systemic racism -- particularly toward Inuit and First Nations people. The order's comments were in response to the death last September of Joyce Echaquan, an Atikamekw mother who filmed herself at a Quebec hospital while staff hurled racist insults at her as she lay dying.

Order president Luc Mathieu had said the decision to speak out publicly was the result of a working group created by the organization to ensure no other Indigenous person is treated the way Echaquan had been.

"It's important to recognize the systemic racism against First Nations and Inuit people within the health and social services network in order to put in place structuring actions to promote a more equal and more fair relationship between these communities and the nurses," Mathieu said in the statement.

Echaquan's death led to a coroner's inquest that ended in early June, during which Atikamekw leaders and Echaquan's family repeatedly implored the Quebec government to recognize that Indigenous patients have been systemically denied the same kinds of health-care treatment afforded to non-Indigenous people. Premier Francois Legault and his cabinet ministers have recognized racism exists in the province but have rejected that it's "systemic."

Picard said the order's statement was surprising because some of the nurses and other hospital staff who testified at the coroner's inquest had been hesitant to describe Echaquan's treatment as racist.

"Even after everything they have been through during the pandemic, they are now capable of recognizing that the health-care system is not up to the level it should be when it comes to offering a service to Indigenous people," Picard said.

The next step, Picard added, is for the order to officially adopt Joyce's Principle, which is a set of measures drafted by the Atikamekw community to ensure equitable access to health care for Indigenous patients. "Between an official declaration and adopting the principle, there is a gap," Picard said. "Joyce's Principle forces people to commit toward working and changing."

Sipi Flamand, vice-chief of Manawan, Que., Echaquan's Atikamekw community located about 250 kilometres north of Montreal, helped to draft Joyce's Principle. For him, the order's acknowledgment is a clear step toward reconciliation.

"This is not a political game, but a recognition based on real experiences from people in the field," Flamand said in an interview Thursday. "Those people are at the heart of our health-care system, the ones working in it every day recognize systemic racism.

"Now, we need the government to do the same."

This report by The Canadian Press was first published on July 15, 2021.