Nobody was arrested as a demonstration to denounce police brutality in Montreal North ended on a violent note.

The event began peacefully at 8 p.m., but by 9 p.m., police reported vandalism, including fires set in garbage cans and targeting a bank.

Police said vandals threw rocks at the police station and patrol cars, and smashed windows throughout the area.

Montreal police Commander Ian Lafreniere said the protest ended peacefully, then a small group of people who were not at the demonstration began working in small groups causing vandalism.

"We're talking criminals, not even people from Montreal North. They were there to cause a commotion with police officers. Now we're doing an investigation because we have a lot of videos and photos. It's not over," said Lafreniere.

He said that the rioters were trying to bait police, including making 9-1-1 calls to try and split up police forces.

Through it all, police hung back. Lafreniere said that was by design – some of the vandals were armed with hammers and a clash might have resulted in serious injuries.

"Their intention clearly was to provoke police, cause damage, they were running after police throwing objects to get a confrontation," Lafreniere said.

There were about 200 protesters on hand at the largest point of the rally, but there were far fewer people at the site when the vandalism began.

People gathered in Montreal North earlier in the evening to speak out against the shooting death of 46-year-old Jean-Pierre Bony.

Bony, a black man, was shot with a rubber bullet last week while trying to run away from police conducted a drug raid.

He died of his injuries several days later.

Police have not revealed the identity of the officer who shot Bony.
The rally also brought up memories of Fredy Villanueva, who was killed by police in Montreal North in 2008. Wednesday would have been his 26th birthday.

Villanueva’s family and friends gathered for the rally because they say the officer who shot him was never brought to justice. Charges were never laid. 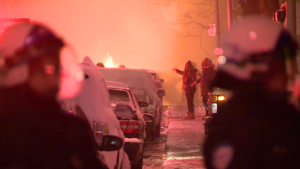