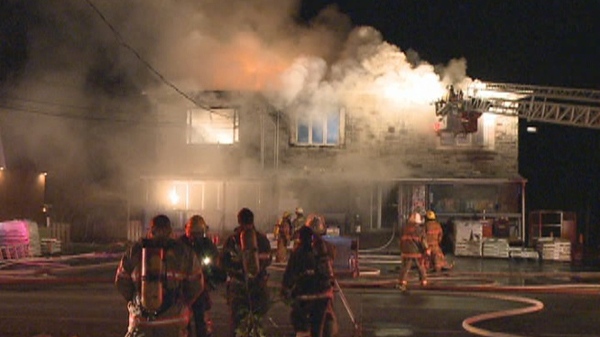 Firefighters from several cities were not able to prevent the destruction of this commercial/residential building at 114 St. Laurent in Maple Grove (Sept. 27, 2011)

Firefighters were busy in Maple Grove and LaSalle overnight, dealing with a burning depanneur and a truck that caught fire.

The first fire broke out at 114 St. Laurent St.shortly before midnight.

When firefighters from Beauharnois, Valleyfield and other cities arrived at the scene the fire had already spread from a depanneur to two apartments on the second floor.

A woman and child who lived in one apartment, along with a man who lived in the other, were able to get out of their homes on their own.

Unfortunately fire crews were not able to put out the flames before they destroyed the entire building.

The tenants said the building had been renovated several times, and that a new roof was recently installed.

Firefighters said the multiple layers of roofing material made it difficult to put out the flames and all hot spots, but by 5 a.m. the fire was completely extinguished.

The only injury was to a fireman, who was treated in hospital after he hurt his shoulder.

Meanwhile in LaSalle, a tractor-trailer parked in a lot caught fire around 2 a.m.

The flames spread to two other vehicles, but they were not as badly damaged.

The trailer that initially caught fire was holding wooden pallets and car batteries, and firefighters suspect the fire was deliberately set.

The case has been transferred to the Montreal Police arson squad.