Fire breaks out on University St. near McGill 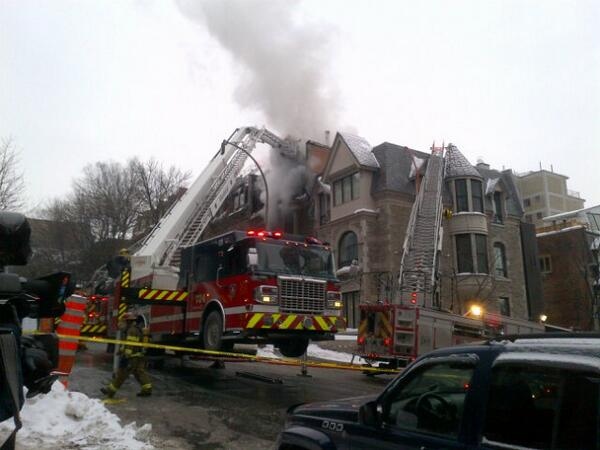 The only sign of flames at the fire on University St. was in the chimney, though smoke could be seen for blocks (photo: Kamila Hinkson/CTV Montreal)

A fire has broken out on University St. near Prince-Arthur St. in the McGill University area.

The blaze broke out at 2:17 p.m. Sunday. Smoke could be seen billowing from several blocks away.

As many as 125 firefighters were at the scene trying to squelch the flames.

The flames forced about 20 people to flee the building. The Red Cross has stepped in to relocate those residents, whose homes sustained serious water damage.

Three firefighters were injured seriously enough to be taken to hospital. One slipped and hurt their knee getting out of a truck, while two were hit by falling debris inside the building.

The blaze was initially deemed a three-alarm fire, but was quickly upgraded to a five-alarm in order to ensure it did not spread, said a Montreal fire service spokesman.

The firefighters requested electricity be cut to the building while they were battling the blaze, which also affected traffic lights and caused congestion along Sherbrooke St. around University Sunday afternoon, according to police.