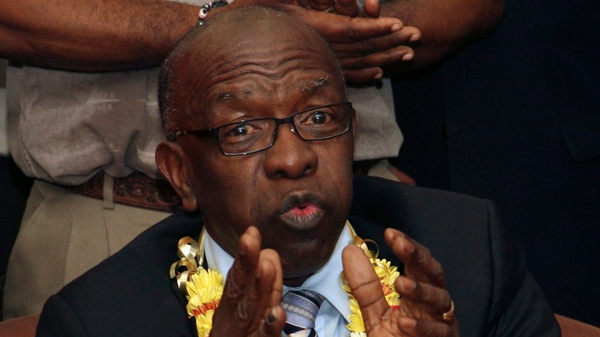 FIFA said it wanted to interview 10 officials from six countries, as part of an investigation being conducted by the agency of former FBI director Louis Freeh.

"The cases will be submitted to the FIFA Ethics Committee at its next meeting in mid-November," the governing body said in a statement.

Former prime minister of Dominica, Patrick John, is among those under suspicion.

One of the accused is from the Bahamas federation, which was the original whistleblower that alerted FIFA to $40,000 cash payments being offered during bin Hammam's campaign visit to Trinidad in May.

Lionel Haven was general secretary of Bahamas football then, when Warner summoned his Caribbean Football Union members to a two-day conference to meet the Qatari candidate.

Bin Hammam denies bribery and is appealing his life ban at the Court of Arbitration for Sport. Warner resigned all his football positions after 28 years in FIFA's high command to avoid an investigation.

FIFA committee members Colin Klass and Horace Burrell also were suspended, for 26 months and six months respectively. Burrell was a leading candidate to succeed Warner as CFU president in a Nov. 20 poll in Jamaica.

Three more elected officials and two CFU staffers also have been banned for between one and 18 months. FIFA's ethics panel has reprimanded three more officials, warned five and dropped cases against two who resigned. Another two men had their cases postponed or left open.

FIFA has not specified why they were punished or what the 10 new cases are about.

Under FIFA's code of ethics, officials are not allowed to accept cash gifts and must report suspected corruption.

Some officials declined to co-operate with Freeh's investigators, who set up several meetings in Miami, the Bahamas and elsewhere in the Caribbean to interview officials.

Montserrat football president Vincent Cassell, one of the 10 accused, said in June that his first scheduled interview clashed with a 2014 World Cup qualifier against Belize, being played in neutral Trinidad.

"We weren't involved in whatever they are talking about," Cassell told the Associated Press then of the bribery allegations, "so we didn't see it as a priority. Montserrat is a very small fry in the world of football. I didn't think they would see us as important."

After the scandal emerged in May, bin Hammam withdrew his election bid three days before the FIFA vote.

Blatter ran unopposed and won a fourth four-year presidential term, with the backing of 186 FIFA members, including most Caribbean islands.

He has pledged a zero-tolerance anti-corruption drive to clean up world football and its damaged image.