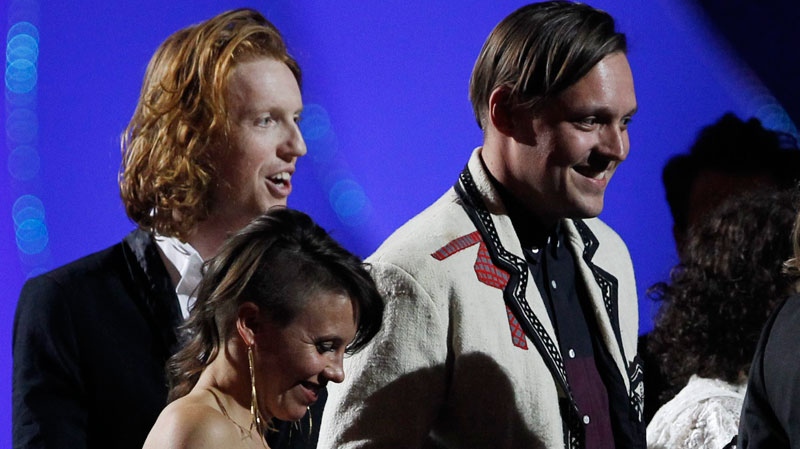 Arcade Fire react after winning the award for International Group on stage at the Brit Awards 2011 at The O2 Arena in London, Tuesday, Feb. 15, 2011. (AP / Joel Ryan)

MONTREAL - They may be the toast of the music world but, if they ever want to play the Fete Nationale celebration in their own hometown, Arcade Fire won't be allowed to do it in English.

Organizers of Montreal's Fete Nationale celebration say the band would have to sing their songs in French, like any other act playing at the festival for Quebec's annual holiday.

The chief organizer said Wednesday that the Grammy-winning band would be welcome to play the June 24 event if it wanted to.

"As long as they conform to certain guidelines," Luc Savard, director general of the event, told The Canadian Press.

When asked whether those guidelines included not singing in English, and performing in French instead, Savard replied: "Voila."

The question of whether Arcade Fire will attend is actually moot for this year: the group will be touring Europe this summer, and Savard says this year's acts are already booked anyway.

Arcade Fire does include the occasional French line in its songs but the band, and its U.S.-born frontman, sing almost exclusively in English.

When they took to the stage at the Grammys they expressed thanks, in English and French, to the city of Montreal and later gushed to reporters backstage about their love for the place.

Lead singer Win Butler, who grew up in Texas, has lived for almost a decade in the city where he met his wife and fellow band member, Regine Chassagne.

After winning the best-album Grammy this week, the group went on to England where they were named the top international band at the BRIT awards.

The group's success has touched off political reaction back home.

There was a congratulatory motion this week in Quebec's national assembly, applauding the band's accomplishments.

But some published opinion pieces mused that the bilingual hipster band reflected qualities of Montreal -- a bilingual, hipster city -- that are rarely recognized, let alone celebrated, by a political elite more focused on linguistic differences.

A popular French-language radio host also grumbled his frustration that the band had managed to win international awards before it had ever taken home a major Quebec musical prize.

The always-sensitive issue of language has proven especially thorny on Quebec's official holiday, which sprang from the traditional June 24 St-Jean-Baptiste holiday celebrated across French Canada.

The presence of Anglo acts two years ago at a large concert, unaffiliated with the official event, prompted protests and even some threats from nationalists. There were ultimately far more cheers, however, than jeers at the event.

And at least year's official Fete Nationale party, emcee and popular television host Guy A. Lepage explained to the crowd that the event must be celebrated exclusively in French as a demonstration of love for a fragile language.

"We're altogether happy that Montrealers won such a prestigious prize," Savard said. "We can't be against that."

The group also has a dedicated fan base in Quebec.

About 45,000 people attended an outdoor show in Quebec City last year, just before the band went on to a two-night gig at New York's Madison Square Garden.

"I really love this band that works on its music instead of being 'posers,' " Lepage wrote.