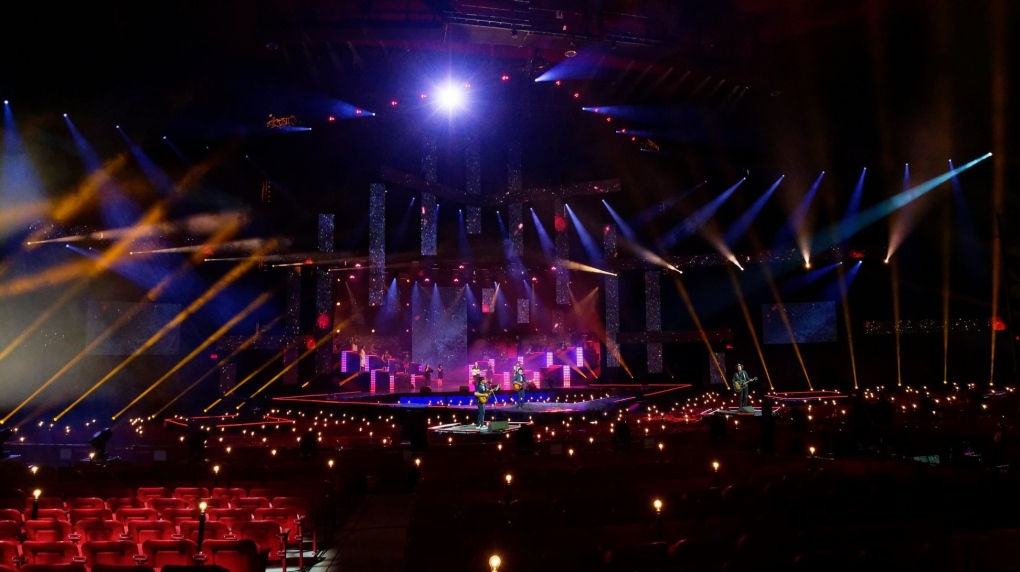 This year's Fete Nationale broadcast was like no others as there were no audience full of cheering face-painted Quebecers. SOURCE La Fete nationale du Quebec Facebook

MONTREAL -- There were no cheering crowds, no spectators waving flags, and Fleur de Lys face paint during the big Fete Nationale broadcast on Tuesday evening, as the province celebrated amid the COVID-19 pandemic.

Rather, Quebec culture was celebrated by a host of artists gathered on the stage of the Cogeco Amphitheater in Trois-Rivières to perform classic songs, but also emphasize the contribution of First Nations and Inuit to the history of Quebec.

Yannick Nézet-Séguin kicked off the celebration with an extract from the Opening Maslenitsa opus 36 by the composer Airat Ichmouratov.

Ariane Moffatt and Pierre Lapointe hosted the annual event, and pre-recorded their performances on Monday.

Marie-Mai performed "Je danse dans ma tête," a song popularized by Céline Dion, during a medley in which Arianne Moffat and Pierre Lapointe did their version of “Larmes de metal” by the group Soupir.

Premier Francois Legault gave a statement in the first half of the show.

Legault pointed out that Quebec was built with the help of Indigenous people while pointing out that people from around the world “came to join us.”

“In 2020, the Quebec nation will rise, more united, stronger, more proud,” said the premier, referring to the health crisis and its consequences.

Michel Rivard and Marie-Michele Desrosiers played some songs from the Beau Dommage repertoire notably singing “Amene pas ta gang,” whose lyrics seemed to be a nod to the rules of physical distancing.

Corneille, in a Montreal alley, Mara Tremblay on a balcony, and Martha Wainwright on the roof of a building, then accompanied them to deliver the “Le blues d'la métropole.”

In the second part of the show, Pierre Lapointe pointed out that the Cogeco Amphitheater, where the show was recorded, was located on unceded Indigenous lands saying “we recognize the Attikameks as the guardians of the lands and waters on which we get together tonight,” added the host, while Michel Rivard was performing the song “Rivière.”

Actress Christine Beaulieu then paid tribute to the rivers of Quebec, “which are our energy and our greatest wealth” by taking the time to say “thank you to the rivers” in several Indigenous languages.

Inuk artist Elisapie delivered a call to live in a united world “that never lets anyone down along the way, the most visible, the new, the fragile, the different, the less young, the less wealthy, the distant, the skinned, those who can no longer breathe or those who have not yet disappeared.”

“It is from our multitude that our wealth is born,” said Elisapie before launching into Richard Desjardins’ “Moi Elsie,” composed by Pierre Lapointe.

This report by The Canadian Press was first published June 24, 2020.