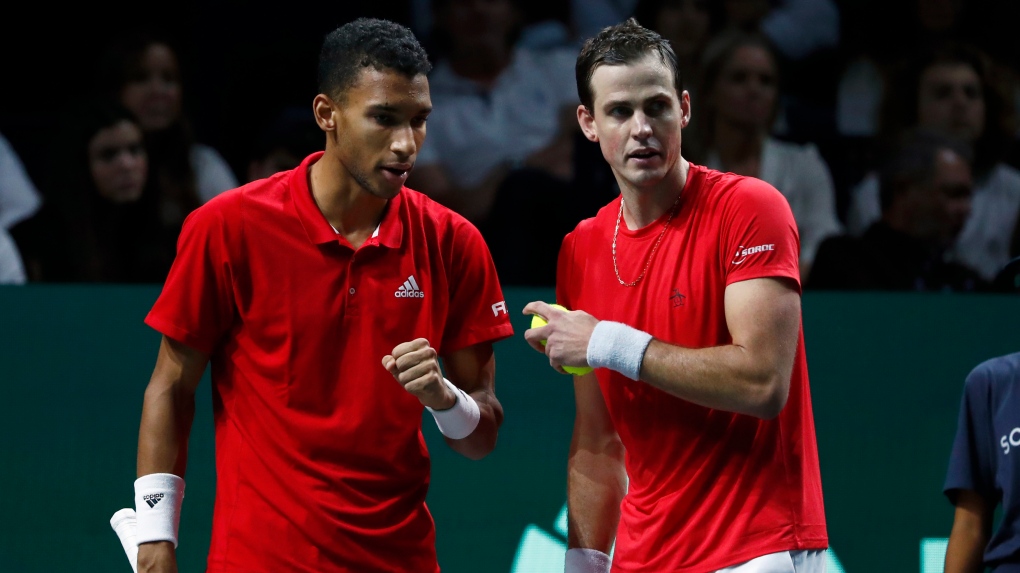 As was the case in Saturday's semifinal against Italy, Felix Auger-Aliassime could be called upon to take the court twice as Canada seeks to defeat Australia and win Davis Cup glory for the first time in its history on Sunday in Malaga, Spain.

However, captain Frank Dancevic has also selected the 22-year-old Montrealer to team up with Vasek Pospisil if a decisive doubles match is needed after the two singles matches.

In that case, Auger-Aliassime and Pospisil would face the Australian tandem of Max Purcell and Jordan Thompson.

In doing so, Canada reached the final round of the Davis Cup Finals for the second time in its history.

Shapovalov and Kokkinakis will meet for the first time.

Eight people were seriously injured after a Laval city bus crashed into a daycare Wednesday morning, according to first responders. The driver of the bus has been arrested, according to Quebec Public Security Minister Francois Bonnardel.

Conservative Leader Pierre Poilievre says that if he becomes prime minister he would uphold the 10-year deals Prime Minister Justin Trudeau is looking to ink with provinces and territories that would inject $46.2 billion in new funding into Canada's strained health-care systems.

With the hope of finding survivors fading, stretched rescue teams in Turkiye and Syria searched Wednesday for signs of life in the rubble of thousands of buildings toppled by a catastrophic earthquake. The confirmed death toll from the world's deadliest quake in more than a decade passed 11,000.

Inflation has eroded purchasing power for many Canadians, but the experience with rapidly rising prices has been far from uniform.

An 'awkward' attempt at a handshake between Alberta Premier Danielle Smith and the prime minister Tuesday is another example of leaders from the western province hesitating before shaking Justin Trudeau's hand, say political experts.

An associate of Ontario’s self-described “crypto king” was operating his own fraud scam parallel to the multi-million dollar Ponzi scheme, court documents allege.

opinion | Tom Mulcair: This is why the federal health-care proposal is so disappointing

Justin Trudeau has thrown in the towel in the fight to maintain the federal role as gatekeeper of a public, universal, accessible and fair health-care system in Canada, writes former NDP leader Tom Mulcair in an exclusive column for CTVNews.ca. 'That could have tragic consequences for folks on the lower rungs of the social and economic ladder.'

Fir trees are under attack in the British Columbia interior, where severe drought and heat are putting forests at risk due to bark beetles.